Our World is Sinking 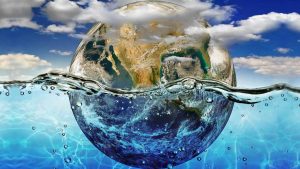 Our World is Sinking

The June 24, 2019, issue of Time on Our Sinking Planet shows Antonio Guterres, the U.N. Secretary-General on the cover off the coast of Tuvalu – one of the world’s most vulnerable countries, to highlight the urgency of rising seas. Among other small island nations grappling with the effects of rising sea levels are Fiji, Kiribati, Maldives, Marshall Islands, and the Bahamas. Left alone these poor countries cannot tackle this huge problem. In the U.S., Florida, Louisiana and North Carolina among other coastal states face the adverse effects of rising sea level.

Globally, it is estimated that at present the sea level is 5 to 8 inches higher on average than it was in 1900, and is expected to rise more quickly by the end of the 21st century.

It is generally agreed that changes in climate we see today are largely caused by human activity. Sea levels started rising in the late 1800s soon after the industrial revolution with the burning of coal, gas and other fossil fuels for the energy needed. These fuels when burnt produce carbon dioxide, which absorbs heat from the sun and traps it, leading to a warming of the atmosphere and our planet. Global average temperatures rose about 1oC since the beginning of the industrial era, melting ice on land and increasing volume of water into the seas.

The Time describes how the leaders of 15 Pacific nations came together on September 2015 in Suva, the capital of Fiji to chart out their course for the approaching international negotiations in Paris. They had three goals in mind: a halt to new coal mines in countries that support the industry; back research and development on issues facing climate change; help poor countries prepare for extreme weather. One demand was paramount: any new global climate pact must aim to stop temperatures from rising more than 1.5oC by the year 2100, half a degree from the 2oC targeted by global climate experts. And they brought in other vulnerable countries in pressuring their wealthier peers.

Activists from all over Europe joined their cause chanting the mantra, “One point five to stay alive.” Ireland President Mary Robinson, who served as the U.N. climate-change envoy during the talks called climate change as an “existential threat”, which has to be overcome.

The result of these efforts was the Paris Agreement signed in 2015 that raised hundreds of billions of dollars in financial commitments by the richer countries of the developing world. It led to the creation of an International Panel on Climate Change in 2018 and subsequently helped save climate talks from collapsing.

An April 30, 2018 article posted by Smithsonian indicates that a rise in sea level will hit coastal lands the hardest. Over the coming centuries, this land that is home to between 470 and 760 million residents will be inundated by rising sea levels associated with a 4oC warming of the atmosphere, with China most to lose, followed by India, Bangladesh, Viet Nam, Indonesia, Japan, and the United States. Rising sea level is already making storms more dangerous, causing more flooding and damaging areas crowded with people.

According to a report by the United Nations Environmental Program, “The 52 [small island] nations, home to over 62 million people emit less than one percent of global greenhouse gases, yet they suffer disproportionately from the climate change that global emissions cause.” These island nations face increased flooding and erosion of their shorelines, and their sources of fresh water and agricultural land become unusable by seawater seeping in.

The Maldives lowest country on the planet has an average height of its 1,2000 islands across 1,000 miles in the Indian Ocean, is only 4 feet above the sea level. The ever-higher waves encroach on its lowest islands and erode beaches with nowhere for residents to retreat when a tropical cyclone or a tsunami wave hits, and they are forced to move as refugees of the world’s worsening climate.

What Are the Future Prospects?

Predicting the future is a difficult task because we do not know how our planet will respond to a warming climate, and there are enough naysayers, including President Donald Trump and his cohorts. However, there are some inescapable trends already taking place that cannot be ignored.

The Intergovernmental Panel on Climate Change by the scientists at the United Nations in its 2013 report projected that sea level will rise by 2 to 3 feet by 2100 if we do not slow our carbon dioxide emissions by using less energy or renewable energy sources.

Short-term alternatives followed are to build barriers: they won’t reduce sea level rise or even to completely remove its impact. They are also costly and have to be maintained consistently, as waves and salt quickly erode concrete and as sea level rises they need to be built higher and higher. They also render beaches useless for humans and animals that live there with disruption of the natural movement of sand and waves.

A recent study by U.S. Center for Climate Integrity found that it would cost $400 billion to build 50,000 miles seawalls up and down in 22 states, with Florida costing nearly $76 billion, followed by Louisiana at about $38 billion, and North Carolina at almost $35 billion, but with other costs far outreaching than building concrete barriers.

Another alternative is moving somewhere else. However, coastlines are lined with homes of millions of people, cities, power plants and ports they rely upon. It won’t be easy to pick up and move inland without massive effort and reconstruction. Over the next century, people will be forced to abandon their homes along the coasts as increased flooding makes life difficult. Many cities, states, and countries are incorporating sea-level rise and shifting coastlines in their planning and policy.

Reducing emissions is the only viable alternative for our future sustainable world. And it is heartening that Democrats like Alexandria Ocasio-Cortez are cognizant of the climate issue and working in the U.S. Congress for the best interest of us all.