Penguin in Their Tuxedos 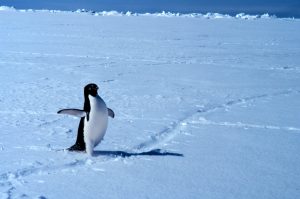 The penguin colony, which has 400,000 members, displays a perfect example of solidarity by gathering together and sticking close to one another to protect themselves and each other from the polar climate.

Waddling penguins are actually a bird species that can’t fly. They form big colonies. They have been created so perfectly by Allah that they can even survive in a region where the temperature can sometimes be as low as –88 degrees Centigrade (-126F). Think for a moment: we put on our jumpers, socks, gloves, coats etc., in winter. But, penguins need none of these. They do not even wear shoes. However, they can easily walk on ice without slipping. This apart, penguins do not have houses, they simply live on ice. Don’t they ever feel cold? The answer is “No” because Allah has specially created them in a way that they can survive in an icy environment.

The body features of penguins are very different from those of human beings. Shall we have a look at them?

In winter, these cute creatures, that belong to a group of 400,000 members, decide to migrate south from the coast further into the icy cold of Antarctica! This consensus they reach is a great miracle in itself. That penguins understand the approach of winter, that they collectively decide on a destination and time to migrate and their compliance with all these decisions without objections from any of the members can only be explained by Allah’s overall control of them. Otherwise, it would be impossible for thousands of penguins to reach an agreement and migrate to another habitat.

The migratory season is also the mating season for penguins. At this time of the year what a penguin primarily does is choose a mate for itself. The second step is to learn the song of the mate in order not to lose her. In other words, the male penguin has the ability to distinguish a specific sound from all other sounds. Remember that it is only by the Will of Allah that a penguin – a creature bereft of wisdom and intelligence as understood by humans – can choose a mate for himself among four hundred thousand penguins and recognize her voice.

This sensitivity in distinguishing voices also holds true for baby penguins. They can recognize their parents by their voices alone. If there were no such distinction among these animals, who are very much like one another, chaos would be inevitable. The unique order established by Allah for penguins and the features given to them secure an orderly life for penguins.

After mating, the female penguin lays only one egg. The responsibility of the male penguin is to incubate this egg. At a temperature as low as –30 degrees Centigrade (-22 F), he tries to fulfill this responsibility without moving for 65 days. This is indeed a tough time for the male penguin. Because he guards the egg, he has no chance to hunt. The mother penguin, on the other hand, leaves to find food for the coming baby.

Can you imagine waiting for 65 days without eating anything? For a human being, the result would certainly be death. However, penguins make this sacrifice without displaying any impatience or boredom and fulfill the service inspired in them by Allah until they complete it.

After an incubation period of two months, the male penguin loses 1/3 of his weight. In the same case, a human being of 60 kilograms (132 pounds) would lose 20 kilograms (44 pounds). After the egg hatches, the baby penguin spends its first two months between his parent’s feet. This protection is vital for the baby because leaving this warm place for only a couple of minutes would result in death. It is surely Allah Who inspires the parents to protect their baby in this way. In this, we once again witness that Allah is the Protector of all living beings. Furthermore, the penguin colony, which has 400,000 members, displays a perfect example of solidarity by gathering together and sticking close to one another to protect themselves and each other from the polar climate. By such precautions, these animals manage to keep their colony warm because they decrease the heat loss by half. Meanwhile, they take those penguins remaining on the outer edge of the circle one by one into the colony and ensure that they also are warm. Penguins have lived in great harmony for generations and they will continue to maintain this order without even one member raising an objection to it.

“He [Allah] hath created the heavens without supports that ye can see and hath cast into the earth firm hills, so that it quakes not with you; and He hath dispersed therein all kinds of beasts. And We send down water from the sky and We cause (plants) of every goodly kind to grow therein. This is the Creation of Allah. Now show me that which those (ye worship) beside Him have created. Nay, but the wrongdoers are in error manifest!” (Luqman 31: 10-11)