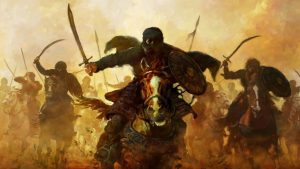 Indeed, bravery, piety, and righteousness do mix in Islam.

Anyone who has ever read anything of the great history of Islam and earlier Muslims must have come across one of the well-known warriors of all time; Abu Dujanah was his name. he was Abu Dujanah Simak ibn Kharashah who died in 632 AC. He was one of the Prophet’s noble Companions and a skilled swordsman who participated in many of the fights of Islam against the disbelievers and polytheists. He was mentioned many times in various Prophetic hadiths in Al-Bukhari and Muslim along with others. His bravery and skills were both noticeable and undeniable. He highly excelled in melee combat and used to distinguish himself in battle by wearing a red band on his head; hence came the nickname, the Red Banded Warrior!

In the Battle of Uhud, Prophet Muhammad (Peace be upon him) gave Abu Dujanah his sword as can be seen in the following hadith:

Anas reported that Prophet Muhammad (Peace be upon him) took hold of his sword on the Day of Uhud and said: ‘Who would take it from me?’ All the persons stretched their hands saying: ‘I would do it; I would do it.’ He (the Prophet) said: ‘Who would take it in order to fulfill its rights?’ Then the people withdrew their hands. Abu Dujanah said: ‘I am here to take it and fulfill its rights.’ He took it and struck the heads of the polytheists” [Sahih Muslim].

During the same Battle, Abu Dujanah pierced into the enemy’s lines and even came within striking distance to one of the enemy’s leaders, Hind bint `Utbah who was encouraging others to mutilate the bodies of dead Muslims. According to various narrations, Abu Dujanah did not kill her and spared her as he did not want to stain the Prophet’s sword with the blood of a woman even though she was a fighter herself or at least one who stirred the polytheists’ troops to advance and slain all Muslims including the Prophet (Peace be upon him).

In addition, during the same battle, Abu Dujanah received several wounds in his back after positioning himself before the Prophet (Peace be upon him) to protect him against the spears, swords and arrows of the polytheists who gathered around the Prophet in an attempt to kill him and get rid of him and his mission once and for all. He, with other noble Companions, circled the Prophet and protected him with their bodies and souls since he was the champion of Allah’s faith on earth and without him, the religion would not have reached anyone of us.

The noble companion Abu Dujanah died in the Battle of Yamamah in 632 as he was one of the two warriors who killed Musailimah the Liar, one of those who claimed to be prophets during the lifetime of Prophet Muhammad (Peace be upon him); the other warrior was Wahshi ibn Harb.

Before we end this account of that noble companion, let us look into one incident which reflects his righteousness as well as piety and avoidance of eating what is not lawful or halal. This incident shows how Islam produces godly and pious people who can be fierce fighters for the sake of Allah at the same time as there is no contradiction whatsoever between being brave and being pious and righteousness. Indeed, bravery, piety, and righteousness do mix in Islam.

Abu Dujanah replied, “Yes I do O Prophet of Allah, and I cannot do without Allah even for a second!”

“So, why do not you wait after salah till you recite the supplications with us and ask Allah to give you whatever you want?” Said the Prophet (Peace be upon him).

Abu Dujanah said, “The reason is that I have a Jewish neighbor who has a palm tree whose branches fall into my yard; when winds come during the night, the ripen dates fall down from the palm tree into my yard. Therefore, I rush out of the mosque immediately after the salah so that I can pick up all the dates and give them back to their owner (the Jewish neighbor) before my children wake up and eat from it while they are hungry!”

He further added, “I swear by Allah, O Messenger of Allah, that one day, I saw one of my children chewing one of these dates, so I entered my finger inside his mouth and throat and took it out before he swallows it. When my child cried, I told him, ‘If I stand before Allah as a thief, won’t you feel ashamed?!’”

Upon hearing this, Abu Bakr Al-Siddiq, the noble Companion of the Prophet (Peace be upon him) went to the Jew, bought the palm tree, and gave it out to Abu Dujanah and his children.

Consequently, when the Jew knew about the issue, he gathered all his children and household and went to the Prophet (Peace be upon him) and they all declared their Islam and submission to Allah the Almighty, Glory be His.

This is how they, the earlier Muslims, were callers to Islam with their stances that stemmed from their deep faith and their noble dealings which reflected that deep and profound faith in Allah, the Creator of everyone and everything.