Popular Irish singer-songwriter, Sinead O’Connor, has left Catholicism and converted to Islam. The 51-year-old Dublin singer, also known as Magda Davitt, revealed she had changed her name to Shuhada Davitt. Now she has new religion and new name: 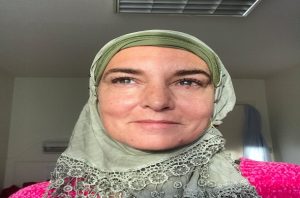 I am proud to have become a Muslim. This is the natural conclusion of any intelligent theologian’s journey.

“This is to announce that I am proud to have become a Muslim. I will be given (another) new name. It will be Shuhada“, she revealed on Twitter.

“I grew up in the 80’s, and while I was never ‘into’ music, of course I knew all of the famous singers of that time frame, and when one is surrounded by people who are into music, one can’t help but know the songs and lyrics (that’s my legit excuse btw!!).”

After changing her name to “Shuhada” on her Twitter page, O’Connor also replaced her profile picture with a photo that reads “Wear a hijab just do it”.

The next day, she shared that she had been given her first hijab, writing that she wouldn’t be sharing a photo because it’s “intensely personal,” before humorously adding that there was a second reason she wouldn’t be posting a photo.

“My best friend, Elaine just gave me my 1st Hijab and she got chills all over her body when I put it on. Not gonna post a photo because is intensely personal. And I’m an ugly old hag. But I’m a very, very, very happy old hag.”

Over the next couple of days, the Irish singer went on to share a number of photos of herself wearing a head covering, simply writing that she was “happy.”

O’Connor also posted videos of her attempting the azan – the Islamic call to prayer.

She wrote that it was her first attempt at this and added, “I got some pronouncition [sic] wrong because emotions took me from my page… but there’ll be hundreds of others onstage to come.

“Sorry re all the mistakes in my Azan…. 1st attempt. When I’ve practiced it 30 times I’m Gonna make the world stop turning,” O’Connor tweeted.

Additionally, her Twitter bio now reads, “PLEASE BE AWARE THAT IF YOU POST RACIST OR ANTI MUSLIM RHETORIC ON THIS PAGE YOU WILL BE BLOCKED.”

The musician was ordained as a priest in 1999 in a dissident Roman Catholic group.

People magazine, which had also reported on O’Connor’s conversion, said she had previously spoken out against the abuses of the Catholic Church, even ripping up a photo of Pope John Paul II during a Saturday Night Live appearance in 1992 because of the sexual abuses and cover-ups taking place under his watch.

O’Connor was born in Dublin in 1966 and rose to fame in the late 1980s with her debut album The Lion and the Cobra. She has since produced ten solo albums.

Sinead O’Connor achieved worldwide success in 1990 with a new arrangement of Prince’s song Nothing Compares 2 U.

Now her embracing of Islam is, as she herself realizes, is a natural conclusion:

“This is the natural conclusion of any intelligent theologian’s journey. All scripture study leads to Islam. Which makes all other scriptures redundant,” she wrote on Twitter.

May Allah bless our sister Shuhada and make her a role model for her people, and all of us!