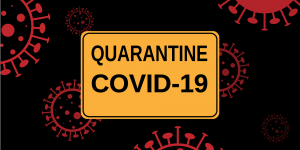 The world is facing a very serious pandemic, Coronavirus or COVID-19, which is killing thousands of people across the globe.

WHO (World Health Organization) and Ministries of Health in all infected countries urge the people to take safety precautions to curb Coronavirus.

One of the essential precautions is to stay home or self-isolation. This is known medically as quarantine.

The Prophet said, “If you hear of an outbreak of plague in a land, do not enter it; but if the plague breaks out in a place while you are in it, do not leave that place.” (Al-Bukhari)

From this hadith we learn that it is not permissible to endanger your health or endanger others’ health.

Prophet Muhammad (peace be upon him), more than 1430 years, offered some tips to avoid infection with pandemics.

Prophet Muhammad stressed the importance of cleanliness. Abu Malik Al-Ashari reported: The Messenger of Allah said: “Purity is half of faith…” (Muslim)

An important aspect of quarantine is to isolate the deceased person and keep him away from healthy people. Prophet Muhammad said: “The ill should not be taken to the healthy.” (Ibn Majah)

Amr ibn Sharid reported on the authority of his father that there was in the delegation of Thaqif a leper. Prophet Muhammad sent a message to him: “We have accepted your allegiance, so you may go.” So, the Prophet never shook hands with him or allowed him to be around. He asked him to return home.

Ibn Abbas (May Allah be pleased with them) reported:

Umar ibn Al-Khattab (may Allah be pleased with him) set out for Ash-Sham (the region comprising Syria, Palestine, Lebanon and Jordan). As he reached at Sargh (a town by the side of Hijaz) he came across the governor of Al-Ajnad, Abu Ubaidah ibn Al-Jarrah (may Allah be pleased with him) and his companions. They informed him that an had broken out in Syria. Ibn Abbas relates: Umar said to me: “Call to me the earliest Muhajirun (Emigrants).” So, I called them. He sought their advice and told them that an epidemic had broken out in Ash-Sham. There was a difference of opinion whether they should proceed further or retreat to their homes in such a situation. Some of them said: “You have set forth to fight the enemy, and therefore you should not go back;” whereas some of them said: “As you have along with you many eminent Companions of Messenger of Allah, we would not advice you to set forth to the place of the plague (and thus expose them deliberately to a danger).” Umar (may Allah be pleased with him) said: “You can now go away.” He said: “Call to me the Ansar (the Helpers).” So, I called them to him, and he consulted them and they differed in their opinions as well. He said: “Now, you may go.” He again said: “Call the old (wise people) of the Quraish who had emigrated before the conquest of Makkah.” I called them. Umar consulted them in this issue and not even two persons among them differed in the opinions. They said: “We think that you should go back along with the people and do not take them to this scourge. Umar made an announcement to the people, saying: “In the morning I intend to go back, and I want you to do the same.” Abu Ubaidah ibn Al-Jarrah (may Allah be pleased with him) said: “Are you going to run away from the Divine Decree?” Thereupon, Umar said: “O Abu Ubaidah ! Had it been someone else to say this.” (Umar did not like to differ with him). He said: “Yes, we are running from the Divine Decree to the Divine Decree. What do you think if you have camels and you happen to get down a valley having two sides, one of them covered with foliage and the other being barren, will you not act according to the Divine Decree if you graze them in vegetative land? In case you graze them in the barren land, even then you will be doing so according to the Divine Decree.

There happened to come Abdur-Rahman ibn Awf who had been absent for some of his needs. He said: I have knowledge about it. I heard the Messenger of Allah saying, “If you get wind of the outbreak of plague in a land, you should not enter it; but if it spreads in the land where you are, you should not depart from it.” Thereupon, Umar bin Khattab (May Allah be pleased with him) praised Allah and went back. (Al-Bukhari and Muslim)

Aishah (may Allah be pleased with her) reported:

I asked the Messenger of Allah about pestilence and he said, “It is a punishment which Allah sends upon whomsoever He wills, but Allah has made it as a mercy to the believers. Anyone who remains in a town which is plagued with pestilence maintaining patience expecting the reward from Allah, and knowing that nothing will befall him other than what Allah has foreordained for him, he would receive a reward of Shaheed”. (Al-Bukhari)

Prophet Muhammad also advised Muslims to seek medical treatment when they feel sick. Usamah ibn Sharik narrated: I came to the Prophet and his Companions were sitting as if they had birds on their heads. I saluted and sat down. The desert Arabs then came from here and there. They asked: Messenger of Allah, should we make use of medical treatment? He replied: Make use of medical treatment, for Allah has not made a disease without appointing a remedy for it, with the exception of one disease, namely old age. (Abu Dawud)

Prophet Muhammad also emphasized the significance of personal hygiene and made it a human nature. Abu Hurairah (may Allah be pleased with him) reported that the Prophet said: “Five practices are of the fitrah (natural disposition): circumcision, shaving the pubic region, clipping the nails and cutting the moustaches short.” (Al-Bukhari and Muslim)

Editorial Note: This article is based on Dr. Craig Considine’s article published on https://www.newsweek.com/