Prophet Noah between Hollywood and the Qur’an 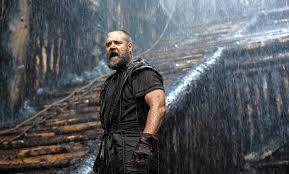 Darren Aronofsky’s movie Noah, a fantasy film that retells the famous biblical tale of ‘Noah,’ his ark and God’s wrathful flood has been released worldwide in the last few days. Even before its release, the movie gathered Christian and Muslim criticism amounting to outrage and bans. The movie has drawn much criticism for depicting the Prophet (pbuh) and not abiding by the original story.

An outcry by several religious organizations, saying that the script had strayed from the original tale, had forced producers to add a message at all trailers and poster that clarifies that.

“The film is inspired by the story of Noah. While artistic license has been taken, we believe that this film is true to the essence, values, and integrity of a story that is a cornerstone of faith for millions of people worldwide,” read the message that was added to trailers. “The biblical story of Noah can be found in the book of Genesis,” the message added.

Now, the following lines present the real story of Prophet Noah (Nuh) (pbuh) as depicted in the Ever-Glorious Qur’an based on authentic Islamic sources.

After the death of Prophet Enoch, several events occurred over time that led to humans committing the first human blasphemy. There were five pious people who had died. Their names are cited in Surat Nuh, verse 23. They were Wadd, Suwa`, Yaghuth, Ya`uq, and Nasr. Satan came to the people in the shape of a man and told them to build statues of these five men. Building statues of men were permissible in the rules given to Prophet Enoch. Later this was abrogated. In the rules of Prophet Muhammad, it is forbidden to build a statue of a living thing.

The people responded to the whispers of the devil and built these statues to remember and honor these five good men. After a long period of time, Satan reappeared. Ignorance had spread widely and many tribulations had occurred among the people. The statues had become very common among the people.

Surat Nuh, verse one, means that God sent Prophet Noah (Nuh) to his people and ordered him to warn them to return to Islam and leave out this blasphemy before a severe torture would befall them. Noah was the son of Lamak, the son of Mattushalakh, the son of Enoch.

The time span between Enoch and Noah is one thousand years, that being the first era of ignorance. In these years, the first blasphemy was committed and spread among humans. Noah was the first Prophet and Messenger that God sent to the blasphemers.

God sent Prophet Noah to the blasphemers to call them to the true Religion, with its true and valid worship. In Surat al-A`raf, verse 65, God said that Prophet Noah said,

“O my people worship God, He is the only God Who deserves to be worshiped. Be God-fearing.”

“I fear for you a day that will bring a severe torture if you do not leave blasphemy”.

Prophet Noah endeavored during the day and night. He spoke to them of the great rewards of being Muslims, the rewards of the Hereafter, about Paradise and all the rewards prepared for the pious, and the severe tortures of Hell-fire. He used many methods and spent a lot of time calling them back to Islam. Most did not respond to his call and did not come back to Islam.

“He stayed among them for one thousand years less fifty.”

“My role is to convey, but God is the only One Who creates the guidance in the hearts of the people.”

Prophet Noah did not get desperate, even though so few people responded to his call. It was when God revealed to Noah that those who believed have believed, and no one else of his people would believe, that Prophet Noah made a du`a’ (supplication) to God for their destruction.

Prophet Noah asked God not to leave any blasphemers on the Earth. God answered the request of Noah and revealed that He would drown them all in a great flood. God ordered Prophet Noah to build an ark. Prophet Noah gathered the wood, tar, and iron for that ark. The people mocked Prophet Noah on account that he was making an ark on dry land, away from water. Those blasphemers got worse and worse. God ordered Noah that when he sees a sign he should start loading the ark. The sign was seeing water flowing out of an oven made of stones that belonged to Lady Eve.

God made the skies rain. As a result, God made the beasts gathered near the ark. Prophet Noah took a male and female pair of each kind of animal. The believers also went on the ark. Water sprang out of Earth in large quantities. The rain fell for a long time and it was cited that it was for 40 days. After lifting up on the water, the ark went to the location of where the Ka`bah was and circled around that location seven times. After being on the water for a long time, the ark went to a mountain in Mosul, Iraq, called al-Judiyy, where it rested.

God protected Prophet Noah and his believing followers and inflicted the punishment on the blasphemers. All the blasphemers drowned including the son of Noah, Kan`an. Kan`an rejected the teachings of his father Noah. He did not respond to the warning of his father that the flood would drown the disbelievers. Kan`an said, “I will climb the mountain and escape the flood”. Prophet Noah said that there was no way to escape the flood if one was a disbeliever. The water kept rising until it covered the peak of the mountain Kan`an was on, then he drowned.

“Ride with us on the ark and do not stay with the blasphemers. Become Muslim and come on board the ark.”

“I will resort to a mountain that will protect me from the water.”

“Today there shall be no one to protect you from the torture of God, except for whomever God willed mercy.”

The waves separated Noah from Kan`an, and Kan`an drowned. The waves were very high, like mountains.

Noah’s wife also died as a blasphemer. Noah’s wife is cited in the Qur’an in Surat At-Tahrim. Noah’s wife betrayed him by not believing in him. She would tell the people that her husband was crazy. However, she did not commit adultery. No wife of a Prophet betrayed her husband with adultery. It is said that the name of this wicked woman is Walighah.

God told us the details of the water coming from the sky, springing from the Earth, and the ark floating, in Surat Al-Qamar, verses 11-14. God told us that He ordered the gates of the sky to open up, so that pouring water would come down. God ordered the Earth to release its water within itself. Both water from the sky and water that sprang out from the Earth met together. God lifted Noah and his companions on planks of wood and nails (the ark) and rescued them. God said that the ark ran and floated under His protection. The ark moved and floated on waves as high as mountains (Hud, 42).

We come from the three sons of Noah

As to the day on which the ark landed on Mt. Judiyy, Qatadah and others cited that the believers went on the ark on the 10th day of Rajab. They floated for 150 days and the vessel landed on Mt. Judiyy, staying for one month before the people got out. The day they went off the ark was the 10th day of Muharram. Ibn Jarir narrated a similar piece of information and that they fasted on the day they got out.

When Prophet Noah was about to die, he was asked a question by the angels, “How did it feel to spend so many years on Earth?” Prophet Noah replied, “I saw this life on Earth like a house with two doors. I entered into that life from one door and I left through the other.” He meant that it went so quickly. Our Prophet said that this world is like the farm for the Hereafter. Here you plant your deeds, and in the Hereafter you harvest. It was narrated that Prophet Noah lived for 1400 years, as well as other narrations.

When Prophet Noah ate he would say “Al-Hamdulillah” (praise and thanks to God), and he said this when he drank, put on his clothes, and rode an animal as well. He was very thankful to God, as cited in Surat Al-Isra’, verse 3,

“Prophet Noah was a thankful slave of God.”

God said in Surah Saba’, verse 13, that one would find among the slaves of God few that are truly thankful to God. This does not mean that only a few people are Muslim. It means that the majority of Muslims are not highly pious Muslims. Most Muslims use their endowments to do some sins, and hence they are not truly thankful.

From Adam to Noah: The Need for Guidance