Rain Is Sent Down in Due Measure 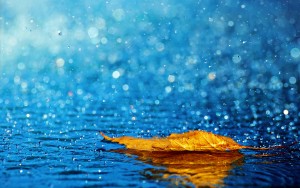 Every year, the amount of water that evaporates and that falls back to the Earth in the form of rain is “constant”: 513 trillion tons.

Rain Is Sent Down in Due Measure

Another item of information provided in the Qur’an about rain is that it is sent down to Earth in “due measure.” This is mentioned in Surat Al-Zukhruf as follows:

“It is He Who sends down water in due measure from the sky by which We bring a dead land back to life. That is how you too will be raised [from the dead].” (Al-Zukhruf 43:11)

This measured quantity in rain has again been discovered by modern research. It is estimated that in one second, approximately 16 million tons of water evaporates from the Earth. This figure amounts to 513 trillion tons of water in one year. This number is equal to the amount of rain that falls on the Earth in a year. Therefore, water continuously circulates in a balanced cycle, according to a “measure.” Life on Earth depends on this water cycle. Even if all the available technology in the world were to be employed for this purpose, this cycle could not be reproduced artificially.

Even a minor deviation in this equilibrium would soon give rise to a major ecological imbalance that would bring about the end of life on Earth. Yet, it never happens, and rain continues to fall every year in exactly the same measure, just as revealed in the Qur’an.

The proportion of rain does not merely apply to its quantity, but also to the speed of the falling raindrops. The speed of raindrops, regardless of their size, does not exceed a certain limit. 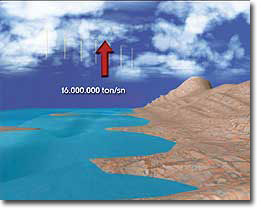 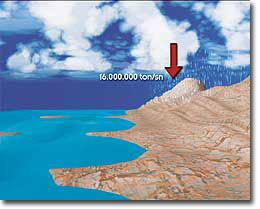 Every year, the amount of water that evaporates and that falls back to the Earth in the form of rain is “constant”: 513 trillion tons. This constant amount is declared in the Qur’an by the expression “sending down water in due measure from the sky.” The constancy of this quantity is very important for the continuity of the ecological balance, and therefore, life.

Philipp Lenard, a German physicist who received the Nobel Prize in physics in 1905, found that the fall speed increased with drop diameter until a size of 4.5 mm (0.18 inch). For larger drops, however, the fall speed did not increase beyond 8 meters per second (26 ft/sec).1 He attributed this to the changes in drop shape caused by the airflow as the drop size increased. The change in shape thus increased the air resistance of the drop and slowed its fall rate.

As can be seen, the Qur’an may also be drawing our attention to the subtle adjustment in rain which could not have been known 1,400 years ago.