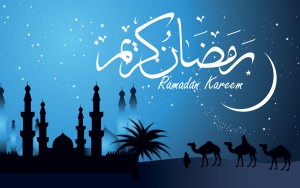 If a person overeats in the evening and indulges in heavy, fatty foods, this offsets the physical benefits of fasting.

The holy month of Ramadan is a time of restraint, reflection, and renewal. Muslims make every effort to better themselves and to be drawn closer to their Creator.

They guard their tongues, engage in long hours of worship, exercise patience, and open up their hearts and pockets to charitable causes.

However, when it comes to consuming food during the evening hours, some believers fall short of following the Sunnah of Prophet Muhammad, peace and blessing be upon him (PBUH).

In order to compare the eating habits of Muslims today, during the month of Ramadan, with that of Prophet Muhammad (PBUH) an informal survey was conducted.

In 2008, over 270 participants from around the world were asked about their consumption habits during this sacred month.

Sixty percent of participants were from the US, 20% from the Middle East, 10% from South Asia (Indian Subcontinent) and 10% were from other countries.

Regarding the iftar meal, it is encouraged to break your fast as soon as it is permissible to do so. The Prophet (PBUH) would hasten to break his fast.

Sahl ibn Sa`d reported that the Prophet (PBUH) said: “The people will not cease to be upon good as long as they hasten in breaking the fast.” (Bukhari and Muslim).

It is reported that the Prophet (PBUH) would also break his fasts with dates as do 86.5% of the survey participants; this is a Sunnah that is well followed by Muslims today.

Imam Ibn Qayyim Al Jauziyah states in his book “Healing With the Medicine of the Prophet” that breaking the fast with dates “is a wise decision because fasting empties the stomach of food. Thus the liver would not find any sufficient energy that it could transfer to the various organs. Sweets are the fastest foods to reach the liver when one eats ripe dates the liver accepts it, benefits from it and then transfers the benefit to the rest of the organs of the body.”

After this process, the body is ready to accept and digest additional food. Thus ideally, one should break their fast with a date and after praying the Maghrib prayer, they should continue with their meal.

This gives the body ample time to prepare itself for the sudden increase in food intake. 58% of respondents to the survey stated that they eat their meal after the Maghrib prayer.

It is during the Iftar meal that we consume the most and often overindulge ourselves.

40% of participants admitted that they eat at least twice as much for Iftar than they eat for a regular dinner in any other month.

Fifty percent of respondents to the survey admitted that they overeat during Ramadan and 62% felt that they eat heavier and richer foods during this blessed month.

Thus, it is a cause for concern that especially in this holy month of Ramadan, when the nafs (self) should be kept in check, some choose to overindulge and eat in extravagance.

Fasting during the daylight hours has several health benefits; it cleanses the system and removes harmful toxins from the body.

When the body is fasting and not occupied with the process of digestion, its organs are given an opportunity to rejuvenate and restore themselves, in turn allowing the one who fasts to recover from various ailments.

However, if a person overeats in the evening and indulges in heavy, fatty foods, this offsets the physical benefits of fasting.

It is generally presumed that since one is restraining from food and drink during the daylights hours, the body needs increased input during the non-fasting hours.

This isn’t the case, however, as the body regulates itself when it is in fasting mode and has the opportunity to utilize its storage of body fat.

To remain healthy and active during Ramadan, the amount of food intake isn’t as important as the variety of foods we eat.

The Prophet (PBUH) was known to eat an assortment of foods including meat, fruit, bread, and dates, according to Imam Ibn Qayyiim.

Thus to maximize the physical benefits of fasting it is desirable to eat less but have a balanced diet which taps into the major food groups.

As for the types of foods eaten during Ramadan, 67% of respondents said they eat 3 or more different types of dishes, with the over 30-year-olds eating more of a variety of foods than the 18 – 30-year-olds.

Fifty-seven percent of the participants stated that they eat fried food for iftar and 34% of them said that the majority of their meal consists of this type of food. Thirty-four percent of respondents include desserts in their iftar meal.

The Prophet (PBUH) strongly recommended eating Suhoor. Abu Sa’eed al-Khudri reported that the Messenger (PBUH) said: “Eating the Suhoor is blessed. Do not neglect it even if you take a gulp of water because Allah and His angels invoke blessings upon those who partake in the pre-dawn meal.” (Ahmad).

It is encouraged by the Sunnah to delay the Suhoor as much as possible and eat until the last permissible minute.

70% of the respondents claim that they delay their suhoor till the last moment.

According to ‘Amr ibn Maimun: “The companions of Muhammad (PBUH) would be the first to break the fast and the last to eat their Suhoor.” (Al-Baihaqi, Abdur-Razzaq, and Al-Haithami; Sahih).

For Suhoor it is recommended to have high fiber, slow digesting foods that satisfy the hunger for longer; oats and fiber-rich fruit are good options to have.

The Prophet used to eat dates for Suhoor and it is recorded that he said: “The best Suhoor for the believer is dates.” (Abu Dawood, Al-Baihaqee, and Ibn Hibbaan).

Dates are a powerhouse of nutrients and an instant source of energy; they are high in sugar, fiber, iron, potassium, and magnesium.

Consuming dates allows one to feel satiated for an extended period of time, making it a perfect food to start your fast with.

Forty-nine percent of the respondents said they have tea or coffee for Suhoor, this isn’t a wise option as caffeine is a diuretic which doesn’t provide us with sufficient hydration and causes us to lose liquids along with essential minerals from our body.

Ramadan is an excellent opportunity to rid ourselves of addictions to caffeinated drinks. One should drink plenty of water and pure fruit juices instead.

Allah says in the Qur’an,

“Eat of the good things We have provided for your sustenance, but commit no excess therein.” (Taha 20:81)

The body of mankind has been blessed with is an Amanah (trust) from Allah.

It is an obligation to take care of it and fuel it with that which is good.

The Prophet (PBUH) is reported to have said, “The stomach is the tank of the body and the veins go down to it. When the stomach is healthy the veins come back in a healthy condition, but when it is in a bad condition, they return diseased.”

Islam emphasizes moderation in every aspect of life and it is essential that this concept be applied to food intake as well.

Imam Ash-Shafi’ said: “I have not filled myself in sixteen years because filling oneself makes the body heavy, removes clear understanding, induces sleep and makes one weak for worship.”

Temperance in eating leads to a healthy body, a sound intellect, and a gentle disposition. It curbs our desires and positively affects the physical as well as the spiritual being of the heart.

This point is further explained by Imam Ibn al-Qayyim when he said: “From the Mercy of the Mighty and Most Merciful is that He has prescribed for them fasting, which will cut off the excesses of eating and drinking, and empties the heart of its desires that divert it in its journey towards Allah the Most High.”

The Prophet (PBUH) warned against submitting to our desires when he said, “My greatest fear for you is the appetites of transgression with regard to your stomachs and your privates and the inclinations which lead astray.” (Ahmad).

Thus we should eat only that which is beneficial and only enough to sustain us and give us the strength to carry out acts of worship and obedience.

A well-known hadith reported by al-Tirmidhi relates that the Prophet (PBUH) said: “Man fills no vessel worse than his stomach. A few morsels should be enough for him to preserve his strength. If he must fill it, then he should allow a third for his food, a third for his drink and leave a third empty for easy breathing.”

This concept is emphasized in the Qur’an where Allah says,

Ramadan is an opportunity to reevaluate one’s relationship with food. It allows one to realize that they can get by without eating for several hours and that their bodies are capable of functioning on a moderate amount of consumption.

Ramadan is fast approaching so instead of spending the coming weeks stocking the pantry and freezer with delights to feast on when the sun sets, let us focus our attention on perfecting our ibadah (worship) so that we may savor the bountiful treats of Jannah (Heaven) without having to worry about clogged arteries or accumulating extra pounds!

Sarah Ghias is a freelance writer who currently resides in Texas, United States. She graduated with Honors from the University of Texas at Dallas with a Business Administration Degree. You can contact her by sending an e-mail to [email protected]