Ramadan: The Month of Mercy 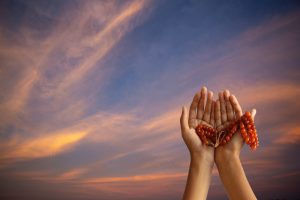 God sends His mercy and compassion upon His servants.

The month of Ramadan [is that] in which was revealed the Quran, a guidance for the people and clear proofs of guidance and criterion. So whoever sights [the new moon of] the month, let him fast it; and whoever is ill or on a journey – then an equal number of other days. Allah intends for you ease and does not intend for you hardship and [wants] for you to complete the period and to glorify Allah for that [to] which He has guided you; and perhaps you will be grateful. (Quran 2:185)

Ramadan is a month of fasting and  a spiritual development and it is one of the five pillars of Islam which are:

1- Declaration of faith: saying by tongue and heart that I bear witness that is no god is worthy of worship except the Creator (Allah) and that Muhammad is His last messenger.

2- Performing the ritualistic prayers to keep the connection with the Creator.

3- Giving obligatory charity to the poor people to keep economic balance in society, purify the wealth, and revive the economy.

4- Fasting the month of Ramadan to developing better self-control and appreciate God’s blessings.

5- Performing the pilgrimage to Mecca once in a lifetime to symbolize the unity of all believers regardless of their classes, backgrounds, cultures, or languages.

Ramadan is  one of the most invaluable months in the Islamic calendar (lunar calendar) and it is obligatory for the Muslims to fast in this month. Muslims who are  physically able to fast are expected to abstain from eating, drinking from dawn to sunset each day of the month. Fasting helps to attain piety and performing  actions which please the Creator and abstaining from actions that displease Him. Ramadan is a time of spiritual reflection, improvement and increased worship and devotion.

For Muslims Ramadan is:

1- The month which was the Holy Quran  revealed in, and which has the night of Decree.

2- The month of Mercy, when God sends His mercy and compassion upon His servants.

Prophet Muhammad (peace be upon him) said:

When  the month of Ramadan comes, the gates of mercy are opened.” (Muslim)

“When Ramadan begins, the gates of Paradise are opened and the gates of Hell are closed, and the devils are chained up.” (Muslim)

4- The month when The Creator Forgives the sins of His Servants in multitude. Prophet Muhammad said:

“Whoever fasts during Ramadan with faith and seeking his reward from Allah will have his past sins forgiven.” (Al-Bukhari & Muslim)

5- The month when The Creator answers Prayers. Prophet Muhammad said:

“The three people whose prayers are never rejected (by Allah) are:

“O you who believe, the fasting has been enjoined upon you as it was enjoined upon those before you, so that you may be God-fearing. For days few in number. However, should any one of you be sick or on a journey, then (he should fast) a number of other days (equal to the missed ones); and those who have the strength, (still, they do not opt for fasting,) on them there is a compensation, that is, the feeding of a poor person. Then whoever does good voluntarily, that is better for him. However, that you fast is better for you, if you only knew.” (Quran 2:183-184)

All Prophets carried the same message to all nations. A simple straightforward message as the condition of salvation: Belief in One God (the Creator), that He has no son or partner,  and worship Him alone without intermediary (priest, saint, idol, prophet).

Every Prophet was the way for his followers in his time to get the salvation, and that was by following his teachings. God’s  teachings  as mentioned in the Quranic verse above give always the principle of empathy,  striving  to bring ease and remove hardship from people.

The connection between soul and body

The  believers  by fasting are more conscious of God, by abstaining from things that people tend to take for granted (such as water), it is believed, one may be moved to reflect on the purpose of life and grow closer to the Creator and Sustainer of all existence

As such, engaging in wrongdoing effectively undermines the fast. Many Muslims also maintain that fasting allows them to get a feeling of poverty, and this may foster feelings of empathy.

The fast is intended to bring the believers closer to God and to remind them of the suffering of the less fortunate. Muslims often donate to charities during the month and feed the hungry.

Fasting is an exercise in self-restraint. It’s seen as a physical and spiritual purification. In other words, fasting teaches how a person can resist his desires.

Ramadan is a time to disconnect from worldly pleasures and focus on one’s prayers.