Ramadan’s Victories: The Conquest of Makkah 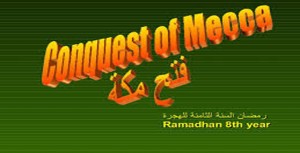 As in the Battle of Badr, the month of Ramadan was the time in which Allah granted the believers their biggest victory ever, namely

By Tajuddin B. Shuaib

As in the Battle of Badr, the month of Ramadan was the time in which Allah granted the believers their biggest victory ever. In the eighth year of Hijrah in the Islamic calendar, Allah (Glory be to Him) delivered the sacred city of Mecca to the Muslims, virtually without any resistance or bloodshed. With this victory Allah rescued this great city from the yoke of shirk (polytheism); it became an Islamic city forever, the city in which tawhid replaced shirk and belief replaced disbelief, and Islam and submission to Allah unseated obstinacy and haughtiness. The worship of Allah was finally declared and the idols were smashed.

There was bad blood between the two tribes, a pre-Islamic blood grudge. Banu Bakar seized on this opportunity and attacked the Khuza`ah without any provocation, while Quraysh, in violation of the treaty, secretly gave their allies all the help they asked for, men and supplies.

The Quraish realized they had broken the treaty with the Messenger by attacking the Muslims’ allies. Realizing the gravity of the situation, they dispatched Abu Sufyan to Madinah on a mission of fence-mending and to beg for mercy and apologize for their misdeed. Abu Sufyan went to meet the Messenger to apologize, review and extend the treaty. He spoke to the Messenger (peace be upon him) but he was disappointed because he got no response. Abu Sufyan returned to Mecca totally disheartened because he knew the future was bleak. When he arrived in Mecca, the Quraysh gathered around to find out the result of his mission. “Totally unsuccessful,” he told them.

The Messenger, on the other hand, had called his companions to prepare for war. Unlike other battles, where he concealed his destination, this time he told them exactly where they would be heading. Prophet Muhammad (peace be upon him) asked the tribes around the Islamic state to enlist in the battle. He demanded that the battle plans be kept secret from the enemy until they reached Mecca because he wanted to surprise them.

The news of the Muslims’ movement was so tightly controlled that no Makkan knew of their approach until they were close to Mecca. The Messenger of Allah stopped there and ordered the army to set 10,000 bonfires. `Umar was guiding the Messenger. Because his movement was so unknown, he needed to tell the Quraysh himself that he was at their door-steps. Thus, he sent `Al-`Abbas to inform any person he could find about the Muslims’ arrival, so that they could come to him and seek some kind of peace resolution in order to prevent any bloodshed in the Sacred City.

While Al-`Abbas was on his lookout, he heard Abu Sufyan saying to his comrade, Badeel bin Zurqaa: “I have never seen a fire this big in my life.” Badeel replied this might be the Khuza`ah army. Abu Sufyan said the Khuza`ah was smaller than this. Al-`Abbas recognized his voice and called to him. Abu Sufyan answered and asked, “What do you want, Abal Fadl?” Al-`Abbas replied, “I am the messenger of the Messenger of Allah and his army of believers is heading this way.” Abu Sufyan, shocked and terrified, asked, “What should I do?” Al-`Abbas said, “Ride with me to the Messenger and I will protect you.”

The Messenger told Al-`Abbas to take Abu Sufyan to the foot of the valley and let him see the Muslim soldiers marching. The army paraded past Abu Sufyan, squadron after squadron. No squadron would pass but Abu Sufyan asked, “Who are those?” While they were watching, a squadron commanded by Sa`ad bin `Ubadah (may Allah be pleased with him) passed. When they were passing, Abu Sufyan overheard Sa`ad saying: “Today is the day of battle, the day of great war, the day when all taboos will be lifted.”

The Messenger proceeded to Mecca, commanding his flags to be concentrated in the area of Al-Hujun. He entered Mecca, a victorious conqueror bowing down his head as a sign of humbleness to Allah (Glory be to Him). He bowed until his head could be seen touching his horse`s neck. Meanwhile, he was reciting:

He repeated it several times.

Truth has arrived and falsehood has perished for falsehood is by its nature bound to perish. (Al-Israa‘, 17:81)

Say: `Truth has arrived and falsehood neither creates anything new nor restores anything. (Saba’ 34: 49)

The Messenger entered the Ka`abah and ordered all the pictures to be destroyed. He prayed inside, and afterward he walked round saying Allahu Akbar (Allah is the Greatest), in every corner declaring the oneness of Allah (Glory be to Him). When he came out of the Ka`abah, he stood in the door and said: “There is no deity but Allah alone; He has no associates. He has made good His promise and helped His servant. He has put to flight the confederates. Every claim of privilege, of blood or property is abolished by me except the custody of the House of Allah and water for the pilgrims. The unintentional slaying in a quasi-intentional way by club or whip, for him the blood wit is most severe: a hundred camels, forty of them to be pregnant. O Quraysh, Allah has taken from you the haughtiness of paganism and its veneration of ancestors. Man springs from Adam and Adam springs from dust.” Then he recited to them this verse.

O Mankind, We created you from male and female and made you into peoples and tribes that you may know one another: of a truth the most noblest of you in Allah’s sight is the most pious. (Al-Hujurat, 49: 13)

He continued: “O Quraysh, what do you think that I am about to do with you?’ They replied “Good. You are a noble, son of a noble brother.” “Well, I would say to you what Prophet Yusuf said to his brothers: `This day let no reproach be cast on you: Allah will forgive you and He is the most Merciful of those who show mercy.’” (Al-Qur’an, 12: 92) He said: “Go your way for you are freed ones.”

On the second day of the campaign the Messenger (peace be upon him) addressed all of Mecca. He said: “Allah made Mecca holy the day He created heavens and earth, and it will be holy until the Day of Resurrection. It is not lawful for anyone who believes in Allah and the last day to shed blood therein, nor to cut down trees therein. It was not lawful to any one before me and it will not be lawful to anyone after me. Indeed, it is not lawful for me except at this time because of Allah’s anger against its people. Now it has regained its former holiness. Let those here now tell those that are not here. If anyone should say, the Messenger killed men in Mecca, say Allah permitted His Messenger to do so but he does not permit you.” The hour that Allah permitted the Messenger was from sunrise to late afternoon on the day of campaign.

The Messenger stayed in Mecca 29 days, while shortening his prayers. He stayed to educate the newly converted Makkans in the basic teachings of Islam, tawhid, to reinforce their iman, and take allegiance from the people.

With this great victory, people entered into the fold of Islam in droves.

Source: Taken from the author’s Ramadan the Fasting Month.