Significance of the Environment in Islam 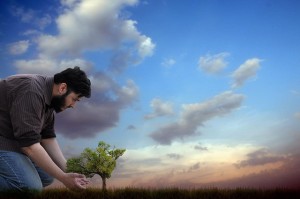 Over the years, our environment has been facing a severe threat. The rivers are polluted with undesirable chemicals and toxicants; underground water is being depleted and getting polluted. Forests are being lost at an alarming rate resulting in environmental degradation.

A balance in oxygen and water in the environment is being lost, which is so important to sustain and preserve the human civilization. For the past century and a half, enormous advances have taken place in science and technology to the benefit of mankind. But, these developments have also posed great problems and health hazards, threatening the existence of human life on earth.

The question of the creation of human beings is relevant, to understand the role of religion in the environment the Qur’an states,

Blessed be He, in whose hands is all sovereignty. He has power over all things. He created death and life that He might put to test and find out, which of you acquitted himself best. He is Mighty, Forgiving One. (Al-Mulk 67:1-2)

Life is thus, a brilliant demonstration of God’s wisdom and knowledge. He has shown the humans the right path of life. There is a complete stability and unity in the laws of the universe. The entire cosmos is remarkably homogenous and in balance.

Man being a part of the whole system must also operate justly in the sphere over which he is given control and power, otherwise, he is working against the natural laws of the Universe, as well as his own nature. The result of which can be alarming calamities and destruction in the environment.

Nearest to the human body is its soul, followed by the environment. Thus, Islam addresses itself in considerable depth to the question of cleanliness and purity of both soul and body, since it is the essence of good appearance and health.

The Prophet (peace and blessings be upon him) said, “Cleanse yourself, for Islam is cleanliness”. Diet also plays an important role in human health. Thus, Islam has prohibited certain foods and allowed others,

O people, eat of what is lawful and good on earth, and do not follow the foot-steps of the Evil one, for he is your avowed enemy. (Al-Baqarah 2:168)

Thus, personal cleanliness and the environment in which a person lives are greatly emphasized in Islam. Further, all those means, which can lead man to indecency and corruption of the environment are also discouraged in Islam. Thus, drinking and gambling are prohibited in Islam.

As the Qur’an states,

They ask you, (O Muhammad) about drinking and gambling, say there is a great harm in both, though, there is some benefit for the people, but harm of the sin is far greater than the benefit. (Al-Baqarah 2:219)

Emphasis on Plantation and Agriculture

Forestry and Agriculture form the backbone of human civilization. However, we find in recent times, a large-scale deforestation all around the world. This has resulted in ecological imbalances in the natural resources. The Prophet (peace and blessings be upon him) said, “when a Muslim plants a plant or cultivates a crop, no bird or human being eats from it without it being accounted as charity for him.”

The Messenger of Allah (SAWS), once remarked that even if you knew that the world would end tomorrow, you should plant a tree.

The proper and judicious use of the water resources is of utmost importance to keep the viable environment for the benefit of humanity.

Moderation is the most important characteristic of Islam. It is probably how Islam views human nature and the meaning of life. Man is created by God, Almighty, and is commanded to be God’s viceroy on earth. Islam discourages luxurious and lavish living. It is a general observation that luxurious life styles lead to weakness among nations, and eventually to their downfall.

The existence of luxury is also an expression of social injustice, as few can afford luxurious items at the expense of the deprived masses of people. The Qur’an states,

When We intend to destroy a township, We permit its luxury loving people to commit wickedness therein. Then the word is proved true against it and We then destroy it utterly. (Al-‘Isra’ 17:16)

Prophet Muhammad (peace and blessings be upon him) was the perfect example of moderation. He advised his followers to spend within their means, neither to be too lavish as to make themselves destitute nor to hold back their wealth from those who had a claim on their resources.

Corruption, dissolution, nervous and mental disorders, intellectual and sexual perversions are eating away the body of present day civilization by destroying the nations and individuals, by exposing the people to evil and corrupt means of life.

However, as long as the human kind follows the laws ordained by the creator, all aspects of his life in the environment of the earth go the natural way. But, if deviations occur from the prescribed path of the Creator, all the social, environmental calamities that human beings face today ensue. It is in the fitness of things, that human life styles be programmed according to the laws of the Creator to save humanity from environmental disasters.

Taken with slight modifications from load-islam.com.

Dr. Akhtar Mahmood is a professor of biochemistry at the University of Punjab.