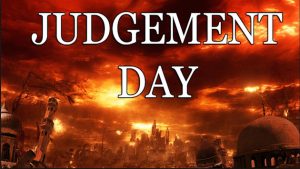 In Islam, the Judgement Day has many signs and portents

As a matter of fact, Muslims believe in the Judgment Day as the fifth of their articles of faith and also believe that it has certain signs and portents to take place before it. Those signs include major and minor ones. Here is a brief summary of most of those signs according to the Qur’an and the Sunnah:

A. The Minor Signs
1. The prophethood of Muhammad (peace be upon him)
2. The death of the Prophet (peace be upon him)
3. The conquest of Jerusalem
4. The Plague of Amwas (in Palestine)
5. The increase in wealth so that sadaqah (alms) is not needed
6. Trials and civil strife:
(i) The appearance of troubles in the East
(ii) The killing of Othman (may God be pleased with him)
(iii) The battle of al-Jamal
(iv) The battle of Siffeen
(v) The appearance of the Khawarij (Dissidents)
(vi) The happening of al-Harrah
(vii) The appearance of the saying that the Quran is created
(viii) The following of the ways of the previous nations
7. The appearance of claimants of prophethood
8. Widespread safety
9. The appearance of fire in the Hijaz
10. Fighting the Turks
11. Fighting the non-Arabs
12. Disappearance of trustworthiness
13. Disappearance of knowledge and appearance of ignorance
14. Increase in the number of police and helpers of the oppressors
15. Spread of fornication
16. Spread of usury
17. Spread of musical instruments and their being thought to be allowed
18. Drinking of intoxicants and its being allowed
19. Adorning the mosques and rivalling therein
20. Building tall buildings
21. The slave girl giving birth to her mistress
22. Increase in killing
23. Time passing quickly
24. Coming together of markets
25. Appearance of Shirk (polytheism) in this Ummah (Muslim community)
26. Appearance of wickedness, cutting off of relations and ill treatment of neighbors
27. Dying of grey hairs with black dye
28. Increase of extreme miserliness
29. Increase in trade
30. Many earthquakes
31. Appearance of sinking into the earth, transformation into animals and false accusations
32. The passing away of the pious
33. The raising of the despicable people to positions of importance
34. That greeting is given only to those the person knows
35. That knowledge is sought from other than the scholars in truth
36. Appearance of women in clothes which do not cover them
37. The truthfulness of the dreams of the believers
38. Spread and increase in writing
39. Laxity with regard to the Sunnah
40. Increase in size of the new moons
41. Increase in falsehood and having no concern to check reports
42. Increase in false testimony and withholding true witness
43. Large number of women and small number of men
44. Sudden death being common
45. Hatred amongst people’s hearts
46. The return of the land of the Arabians to being pastures and rivers
47. Increase in rain but decrease in produce
48. The revealing of a mountain of gold by the Euphrates River
49. The talking of wild animals and inanimate objects to people
50. Wishing for death because of the severity of trials
51. Increase in the number of ‘Romans’ and their fighting against Muslims
52. Victory over Constantinople
53. The appearance of al-Qahtani
54. Fighting the Jews
55. The expelling by Medina of its wicked people, then its desolation at the end of time
56. The sending of a pleasant wind to take away the souls of the believers
57. The attacking of the Sacred House and dismantling of the Ka`bah

B. The Major Signs
a. The Mahdi
b. The Anti-Christ [al-Maseeh ad-Dajjal]
c. The descent of Eisaa (peace be upon him)
d. Yajoj and Majoj (Gog and Magog)
e. The three great sinkings of the earth
f. The appearance of smoke in the sky
g. The rising of the sun in the west
h. The beast of the earth [Dabbat al-Ard]
i. The fire which brings people together