The Tarawih Prayer (Nightly Supererogatory Prayer during the month of Ramadan) is among what Prophet Muhammad (peace be upon him) has ordained for Muslims in Ramadan, and it is a stressed act of the Sunnah. 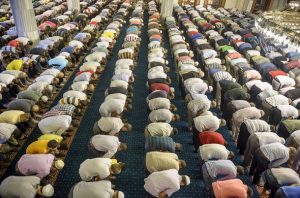 It is called ‘tarawih’ which means in Arabic ‘intervals of relaxation’, because Muslims used to take an interval of relaxation after every four rak`ahs  of the Tarawih Prayer as they used to prolong the prayer.

It is more desirable to perform the Tarawih Prayer in congregation in the mosque, as the Prophet (peace be upon him) led his Companions in performing the Tarawih Prayer for some nights then he stopped for fear that it might become a burden on Muslims.

`A’ishah  (may Allah be pleased with her) narrated:

“One night, Allah’s Messenger (peace be upon him) performed prayer in the mosque and some people followed him. The next night he also performed prayer and too many people gathered. On the third or the fourth night, more people gathered, but Allah’s Messenger did not come out to them. In the morning he said, ‘I saw what you were doing and nothing but the fear that it (i.e. the  prayer) might be enjoined on you, stopped me from comil1g to you.’” (Al-Bukhari and Muslim)

In the narration of Al-Bukhari the words “… and that happened in the month of Ramadan” were added. It is well-known that the Companions performed the Tarawih Prayer after the death of the Prophet (peace be upon him) and the Muslim nation has accepted and followed this practice.

The Prophet (peace be upon him) says:

“Whoever stands (performing prayer) with the imam until he finishes prayer, (the reward for) performing prayer all the night will be recorded for him.” (Abu Dawud, At-Tirmidhi, An-Nasa’I, and Ibn Majah)

The Prophet (peace be upon him) also says:

“Whoever performs prayer during the nights of Ramadan faithfully out of sincere faith and hoping for Divine reward (not for showing off), all his past sins will be forgiven.” (Al-Bukhari and Muslim)

Thus, performing the Tarawih Prayer is stated (stressed) act of the Sunnah that a Muslim should not leave.”

Concerning the number of rak`ahs (units of prayer) performed in this prayer, nothing definite is narrated about the Prophet (peace be upon him) and hence Muslims are free to choose. Sheikh Al-Islam Ibn Taymiyyah said:

When `Umar (may Allah be pleased with him) gathered Muslims to perform the Tarawih Prayer in congregation behind Ubay Ibn Ka`b, the later performed twenty rak`ahs. Some of the Companion used to perform more rak`ahs and other Companions performed less. So, there is no definite text related about the Prophet (peace be upon hgim) determining certain number of rak`ahs to be performed in the Tarawih Prayer.

Many imams of mosques perform the Tarawih Prayer without paying attention or feeling tranquil while bowing or prostrating. Feeling tranquil is an integral part of prayer and a Muslim must pay attention while standing before Allah (Exalted be He) and learn from the words of Allah (the Qur’an) while they are being recited.

Verily, a few rak`ahs (with tranquility and reflection) can outweigh so many ones. Also, it is better to recite the Qur’an with measured recitation than reciting it with haste. It is allowable to be quick in reciting the Qur’an provided that no letter is neglected since it is prohibited to neglect a letter for the sake of quick recitation.

However, it is good for an imam (in congregational prayer) to recite the Qur’an in a way that benefits those performing prayer behind him. Allah dispraises those who recite the Qur’an without understanding its meaning as Allah reveals:

And among them are unlettered ones who do not know the Scripture except in wishful thinking, but they are only assuming. (Al–Baqarah 2:78)

The verse refers to those people who recite (the Book) without understanding its meaning. Allah has revealed the Qur’an for Muslims to understand its meaning and carry out its rulings, not only to recite it.

Some imams of mosques do not perform the Tarawih Prayer as it should be performed, for they recite the Qur’an so hastily that they violate the sound reciting of the Qur’an.

Moreover, they do not feel tranquil while standing, bowing, or prostrating though feeling tranquil is an integral part of prayer.

Furthermore, they may perform only a few rak`ahs in (units of prayer). Thai is, those imams combine many detestable acts which are performing only a few rak`ahs, shortening the the time of prayer, and reciting the Qur’an in a bad way.

Thus, they perform worship heedlessly. They must fear Allah, establish their prayer well and not deprive themselves and those (performing prayer) behind them from performing the Tarawih Prayer according to the legal way.

We invoke Allah to guide all Muslims to success.

The article is an excerpt from the author’s book “A Summary of Islamic Jurisprudence”.