The Anatomical Structure of Turtle Armor 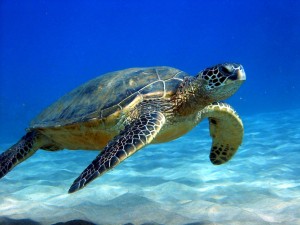 The shell contiguous with the skin is in layers and is renewed in a similar fashion as dead human skin.

The Anatomical Structure of Turtle Armor

The upper part of a turtle’s armour is called a “carapace” and the underside of it is called the “plastron”. God has created the shell of the turtle as a part of the skeleton. Only some parts such as the head, the feet and the tail are open to make it possible to use these organs. All the other parts except these are covered with tightly locked bone plates from top, bottom and sides. The top of these bone plates are covered with keratin plates. Because this bone armour is a part of the skeleton, a turtle cannot survive out of this shell. The shell and the skeleton grow from bottom to top as a layer.

All turtle species breath with lungs. God has created the lungs of these creatures towards the back and stuck to the shell. Ribs that safeguard the lungs are also under the upper part of this armour. However, aquatic turtles do “cloacal respiration”. (In some creatures; digestion, urinary and reproductive waste are thrown from a single point. This is called cloacal respiration.)

The shell contiguous with the skin is in layers and is renewed in a similar fashion as dead human skin. The heavy armour makes it difficult for turtles to walk fast. However, there are many pearls of wisdom we can see in the shell of this creature.