The Atlas Moth Caterpillar: Planning Ahead 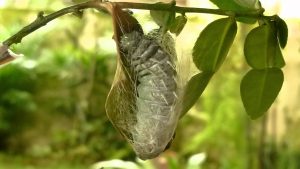 If a bird turns its attention towards any one of the dry leaves, the odds are six to one against its finding the caterpillar.

Obviously, beavers are not the only creatures in nature that plan, calculate, and display rational behavior. One of the other successful creatures in this respect is a species of caterpillar, much smaller than a beaver, in which one would never expect to find the slightest glimmer of intellect. This is the atlas moth caterpillar.

This caterpillar pupates in a cocoon like all other moth caterpillars, concealing itself under a leaf once it has emerged from the larval stage. It does this according to a clever premeditated plan whose every stage requires great skill. Since a fresh green leaf cannot be bent to form a protective shelter, the caterpillar overcomes this problem by the simplest imaginable solution. To serve its purpose, it first ties the leaf to the branch with its silk, so that the leaf won’t fall when the caterpillar gnaws through its stem. Inevitably, the cut leaf dries out and, after a while, begins to curl. In this way, the caterpillar obtains an ideal leaf tube in the space of a few hours.

In the first instance, you might think that by hiding in a dry leaf to obtain a safe abode for itself, the caterpillar displayed intelligent behavior. This might well be true. But also, it would present an easy meal. A dry leaf’s difference in color would give it away, attracting the attention of birds and spelling doom for the caterpillar.

Here again, the caterpillar acts to prevent itself from being recognized easily. Like a mathematician who makes probability calculations, it prepares five or six other “decoy” leaves just like the one it will enter, and weaves silk around them. In this way, any hungry bird must choose among six or seven dry leaves, only one of which contains the caterpillar’s pupa. The others are all dummies. If a bird turns its attention towards any one of the dry leaves, the odds are six to one against its finding the caterpillar. 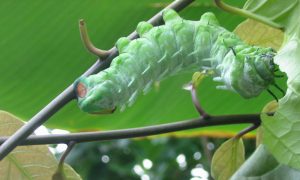 It’s self-evident that these behaviors are all intelligent and premeditated. But is it really possible for a caterpillar with such a microscopic brain and simple nervous system to display such behavior? The caterpillar does not have the faculty of thought to let it plan ahead. Nor can it possibly have learned this stratagem from another caterpillar and, in reality, it’s not even aware of the dangers that birds might present. So who came up with this idea of how to mislead the caterpillar’s predators?

Were you to ask an evolutionist these questions, he would never give you clear and satisfying answers. But when cornered there’s one expression that evolutionists resort to: instincts. They say that any such animal behaviors are instinctive. In the case we’ve just examined, the first question they should be asked is, “Define instinct.” If such behavior is instinctive, as with the caterpillar concealing itself in a leaf, there must be some mechanism or force that drives it to do so. Similarly, some similar force must impel the beaver to build its dams and lodges. And, as we can deduce by the first syllable of the word instinct, this mechanism or force must lie somewhere within the creature.