The Creation of Zebra Stripes 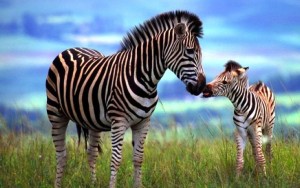 One of the most important defense tactics in animals is, no doubt, camouflage.

– Have you ever thought why zebras have black and white stripes?

– What could be the wonder of the stripes these beings possess?

The Creation of Zebra Stripes

Every being, animate or inanimate, has a color. Moreover, there are the same colors of the same species all over the world. No matter where you go, the color of kiwis are green, the seas are blue or tints of blue and the snow is white. The color of elephants is the same everywhere in the world; the colors of trees is also the same. This situation does not change for artificially produced colors. No matter where you go in the world, if you mix yellow with red, and black and white, you get orange and gray respectively. This also never changes. The black and white stripes of zebras are like this. The common specialty of zebras living in different parts of the world is their black and white stripes. These stripes, which have different wonders, provide great benefits for zebras.

Most zebras live in open places where there is not much place to hide. Therefore, they need to be able to move very quickly in order to survive. All the bodily structures of zebras are created in a way as to provide for these needs.

Zebra, which remind people of horses at first glance, have long hairs called a mane; their physical structure is also created quite similar to horses and they run at least as fast as them. Zebras have very long legs, strong muscles and lungs with broad surfaces which help these beings to run long distances without getting exhausted and being forced to slow down. Even though zebras’ bones are light, they are strong and created specially for running fast. However, one of the most interesting characteristics of zebras is their fur, which is made up of black and white stripes.

One of the most important defense tactics in animals is, no doubt, camouflage. Beings with camouflage ability are under special protection because of their body structure having been created in a compatible way to their living environment. The bodies of these beings are very compatible with their living environment. The striped patterns on zebras have an inherent camouflage ability and help them hide against their enemies in nature. As it is known, zebras live in tall-grass pastures called savannas. It is very difficult to distinguish zebras inside these tall-grass pastures; the stripes appear as shadows of pastures and prevent the bulk of the animal’s body from being seen clearly.

Claiming that this amazing camouflage system of zebras has come into existence by coincidences is, of course, an unscientific and irrational claim. If there is an order, it naturally has a regulator. The flawless order on Earth belongs to Almighty Allah, the Merciful. What rational people need to do is to think about Allah’s creation in detail. Almighty Allah reveals this truth in Surat an-Nahl as such:

“And also the things of varying colors He has created for you in the earth. There is certainly a Sign in that for people who pay heed.” (Al-Nahl, 13)

Zebras’ stripes are an important tool of defense:

Zebras’ colors are one of their most important defense mechanisms. When they stand together, the predatory animals that typically hunt them see the complete herd as a whole due to these stripes. In this case, the hunter finds it difficult to choose the individual zebra it will hunt, and this is a protection for zebras. At the same time, when they stroll around as a herd, when their patterns are next to one another, they appear as a block. The predators that want to hunt these beings cannot focus on them.

Another defense mechanism the black and white stripes have for zebras is that these stripes protect zebras from horse flies that suck blood and carry disease.

Scientists have found that horse flies are affected by light polarized on a horizontal line. This effect is an important aspect that protects zebras from horse fly attacks. Horse flies leave their larvae on leaves in water, and since light reflected from water ripples are polarized, it makes the horse fly go for the leaf instead of water.

In a research experiment, adhesive models of different colors were placed on a field, and it was observed which model the horse flies showed greater attention for striped models. As it can be seen from this research, the horse fly compares the black and white stripes of the zebra to polarized lights and does not go to the zebra thinking that this polarized pattern is water.

This very important observation and experiment is a very crucial example to the perfect order in the creation of living beings and their creation by a single Creator. It is impossible for the zebra to know that horse flies are affected by moving water patterns that reflect polarized light in order to send away the horse fly. Even if a zebra knows about this quality of the horse fly, it most assuredly does not have the power to create its own skin resembling the polarization in the reflection of water patterns. Furthermore, a zebra is solid colored when it is an embryo, but its skin turns into the familiar striped form as it comes close to birth. Just before birth, these perfect stripes form in the mother’s womb.

Almighty Allah is the One Who creates zebra skin thick and long enough for the eyes of the horse fly to see the white stripes that resemble the polarization formed by water patterns in order to prevent the horse fly bites that carry contagious diseases. This example shows the infinite Mercy and Knowledge of our Almighty Lord, Who creates everything with a wisdom:

“Your Lord is Allah, Who created the heavens and the earth in six days and then settled Himself firmly on the Throne. He covers the day with the night, each pursuing the other urgently; and the sun and moon and stars are subservient to His command. Both creation and command belong to Him. Blessed be Allah, the Lord of all the worlds.” (Al-A‘raf, 54)

Zebras’ stripes help them be recognized:

Regular stripes that cover the whole body of zebras from head to toe are different in every zebra. Just like every human being has a different fingerprint, so the stripes on zebras are also different from one another. The stripes of a zebra are much like an identity card. Individuals in a herd and mothers recognize one another and offspring respectively using these different stripes and scents.

Zebras are taken into special protection with their body structures, shapes, colors and patterns created in a way that is compatible to their living environments. The bodies of some of these beings are very compatible with their environments. It can never be claimed that this detailed and compatible system has come into existence by coincidence. There certainly is a will and power that places this compatibility inside these beings and their environment in the most perfect way. The owner of this power is Almighty Allah, Who encompasses both the living being and the systems and environment it uses. This truth proves once again the impossibility of a zebras striped fur coming into existence by coincidence because this animal makes no effort on its own to get these stripes. It only does what Almighty Allah inspires to it and, in other words, it resumes its life and tries to continue its lineage. Therefore, it does not know what it needs to do in order to get the color, shape and black and white colors of its hairs.

Almighty Allah manifests on zebras to show the knowledge of creation to His servants one more time, to remind them of the details in the systems He created that require superior intelligence and inform us of the the beauties He has granted by decorating with shapes. Allah is our Almighty Creator:

“The Originator of the heavens and earth. When He decides on something, He just says to it, ‘Be!’ and it is.” (Al-Baqarah, 117)

Zebras are camouflaged thanks to their colors compatible with their environments; similarly, the colors and patterns of other beings may form an intimidating appearance for enemies. Another point where color helps is in recognizing the mates or offspring of living beings. It is both foolish and illogical to claim that this detailed system has come into existence in a coincidental way. The Owner of this flawless detail is Allah, He Who is the Lord of all worlds and encompasses both the environment and the living being itself, as well as the system it uses, with superior knowledge.

Allah reveals this truth to us in the Qur’an as such:

“Do you not see that Allah sends down water from the sky and by it We bring forth fruits of varying colors? And in the mountains there are streaks of white and red, of varying shades, and rocks of deep jet black. And mankind and beasts and livestock are likewise of varying colors. Only those of His slaves with knowledge have fear of Allah. Allah is Almighty, Ever-Forgiving.” (Fatir, 27-28)

Allah created every living being with the qualities most compatible to their environment. Zebras are one of the examples of Allah’s art of creation. Allah is the One Who does not have any partners in creation, and controls all things under His control.

“That is Allah, your Lord. There is no god but Him, the Creator of everything. So worship Him. He is responsible for everything.” (Al-An`am, 102)