The Diameters of the Earth and Space 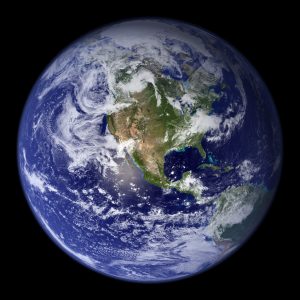 According to Albert Einstein’s General Theory of Relativity, the universe is expanding.

The Arabic word translated as “confines” in the above verse is “aqtar.” This is the plural form of the word “qutr,” meaning diameter and refers to the skies and the earth having many diameters. It is possible in Arabic to tell from the form in which a word is used whether it is singular, plural (more than two), or employed in a dual form. Therefore, the form of the word used here, the plural, refers to another piece of miraculous information.

A three-dimensional body can only be said to have a single diameter if it is perfectly spherical. The term “diameters” can only refer to an irregular but basically spherical shape. This word chosen in the Qur’an – diameters – is important from the point of view of indicating the geoid shape of the earth. The second noteworthy subject in the verse is that the earth and the heavens are mentioned separately in reference to diameters.

According to Albert Einstein’s General Theory of Relativity, the universe is expanding. But this does not mean that the galaxies and other heavenly bodies are being dispersed in space. This means that space is expanding and that the distance between the galaxies is increasing.

The definition of the “confines of the heavens” in Surat Al-Rahman 33 indicates the spherical structure of space (Allah knows best). In the same way that the diameters of space will be different from different points in space, so the diameters of a constantly expanding space will also display differences. From that point of view, the use of the plural form of the word confine is full of wisdom and is one of the indications that the Qur’an is the revelation of our Omniscient Lord.

“… [T]he sun and moon and stars are subservient to His command. Both creation and command belong to Him. Blessed be Allah, the Lord of all the worlds.” (Al-A`raf 7:54)

“Say: ‘Who is the Lord of the heavens and the earth?’ Say: ‘Allah.’ Say: ‘So why have you taken protectors apart from Him who possess no power to help or harm themselves?’ Say: ‘Are the blind and seeing equal? Or are darkness and light the same? Or have they assigned partners to Allah Who create as He creates so that all creating seems the same to them?’ Say: ‘Allah is the Creator of everything. He is the One, the All-Conquering.’”(Al-Ra`d: 16)

“He [Allah] hath created the heavens without supports that ye can see and hath cast into the earth firm hills, so that it quake not with you; and He hath dispersed therein all kinds of beasts. And We send down water from the sky and We cause (plants) of every goodly kind to grow therein. This is the Creation of Allah. Now show me that which those (ye worship) beside Him have created. Nay, but the wrongdoers are in error manifest!”(Luqman 31: 10-11)

“We shall show them Our portents on the horizons and within themselves until it will be manifest unto them that it is the Truth. Doth not thy Lord suffice since He is Witness over all things? How! Are they still in doubt about the meeting with their Lord? Lo! Is not He surrounding all things?”(Fussilat 41: 53-54)