The Domino Sequence of Processes within the Nerve Cells 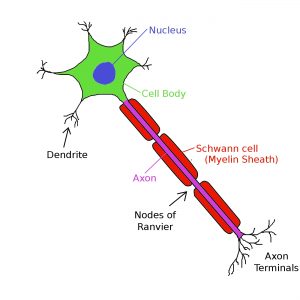 The chain of dominoes loses none of its energy as the individual dominoes fall over.

How does information to the effect that your shoes are hurting your feet reach the brain? How can you perceive discomfort in your feet at the same intensity in your brain, despite the distance of several feet between them? Under normal conditions, this signal should decrease in proportion to the distance involved. However, there is a special system in your body to overcome this.

The signals that set out from the pain-sensitive cells are carried along thanks to the ion movements taking place along the nerve cells. In this way, the signal travels with no loss of energy, and each transfer acquires new energy in each new region of the cell membrane.

The way the nerve signal is transmitted along the axon can be compared to the chain reaction that takes place when dominoes are lined up next to one another. When you push over the first domino, all the others —if set out at specific distances— will fall over in turn. When the first one falls over, a chain reaction ensues: consecutive tiles topple over until none remain standing. A similar chain reaction can be seen in the transmission of signals among neurons:

As you see, every detail of the body is an example of very wise creation. The existence of all these must lead us to reflect more deeply, love our Lord more deeply, and give greater thanks to Him, the Creator of all.

One of the exemplary pieces of behavior of believers is revealed in the Qur’an:

“Those who remember Allah, standing, sitting and lying on their sides, and reflect on the creation of the heavens and the Earth: ‘Our Lord, You have not created this for nothing. Glory be to You! So safeguard us from the punishment of the Fire.’” (Aal `Imran: 191)

“He [Allah] hath created the heavens without supports that ye can see and hath cast into the earth firm hills so that it quake not with you, and He hath dispersed therein all kinds of beasts. And We send down water from the sky and We cause (plants) of every goodly kind to grow therein. This is the Creation of Allah. Now show me that which those (ye worship) beside Him have created. Nay, but the wrongdoers are in error manifest!” (Luqman 31: 10-11)