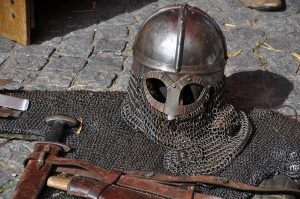 Baybars’ ambition was to emulate the Muslim hero Salahuddeen (Saladin), the founder of the Ayyoubid dynasty in the Jihad against the Crusaders in Syria.

Al-Malik Al-Zahir Rukn Al-Deen Baybars Al-Bunduqdari, was the most eminent of the Mamluk Sultans of Egypt and Syria, which he ruled from 1260 to 1277 CE. He is renowned both for his military campaigns against the Mongols and Crusaders, and for his internal administrative reforms.

Baybars was born in the country of the Kipchak Turks on the northern shores of the Black Sea. After the Mongol invasion of their country around the year 1242 CE, Baybars, along with many of other Kipchak Turks, was sold into slavery. Turkish-speaking slaves, who had become the military backbone of most Islamic states, were highly prized, and eventually, Baybars came into the possession of Sultan Al-Salih Najm Al-Deen Ayyoub of the Ayyoubid dynasty of Egypt. Baybars was sent for military training to an island in the Nile, like all the Sultan’s newly acquired slaves, and demonstrated outstanding military abilities. Upon his graduation, he was granted freedom and appointed commander of a group of the Sultan’s bodyguards.

Baybars gained his first major military victory as commander of the Ayyoubid army at the city of Al-Mansoorah in February 1250 CE against the Crusaders’ army led by Louis IX of France, who was captured and later released for a large ransom. Filled with a sense of pride at their military strength and growing importance in Egypt, a group of Mamluk officers in the same year murdered the new Sultan, Turan Shah. The death of the last Ayyoubid Sultan was followed by a period of confusion that continued throughout the first years of the Mamluk Sultanate.

Having angered the first Mamluk Sultan, Aybak, Baybars fled with other Mamluk leaders to Syria and stayed there until 1260 CE, when they were welcomed back to Egypt by the third Sultan, Al-Mudhaffar Sayf Al-Deen Qutuz. He restored them to their place in the army and conferred a village upon Baybars.

On September 3, 1260 CE within a few months of Baybars’ arrival, he distinguished himself as the leader of the vanguard of the Muslim army against the Tartars (Mongols) in a furious battle at `Ayn Jaloot (the Pool of Goliath) near Jerusalem. Though the Tartars fought well, they were no match for the Muslims, who were far more in number and were able to conceal their numbers until the last devastating moment. The Tartars were pursued beyond Aleppo and swept out of Syria.

For his military achievement, Baybars expected to be rewarded with the town of Aleppo; but Sultan Qutuz disappointed him. After the assassination of Sultan Qutuz, Baybars seized the throne to become the fourth Mamluk Sultan.

Baybars’ ambition was to emulate the Muslim hero Salahuddeen (Saladin), the founder of the Ayyoubid dynasty in the Jihad against the Crusaders in Syria. As soon as he was acknowledged as Sultan, Baybars set about consolidating and strengthening his military position. He rebuilt all the Syrian citadels and fortresses that had been destroyed by the Mongols and built new arsenals, warships, and cargo vessels. To achieve unity of command against the Crusaders, Baybars united Muslim Syria and Egypt into a single state. He seized three important towns from the Ayyoubid princes, thus ending their rule in Syria. From 1265 to 1271 CE, Baybars conducted almost annual raids against the Crusaders. In 1265 CE, he received the surrender of Arsuf from the Knights Hospitalers (a Christian military group). He occupied Atlit and Haifa, and in July 1266 CE he received the town of Safed from the Knights Templar (another Christian military group) garrison after a heavy siege. Two years later, Baybars turned toward Jaffa, which he captured without resistance. The most important town taken by Baybars was Antioch (May, 1268 CE). His seizure of additional strongholds in1271 CE sealed the Crusaders’ fate; they were never able to recover from their territorial losses. Baybars’ campaigns made possible the final victories won by his successors.

Baybars’ permanent goal was to contain the continued Mongol attacks on Syria from the north and east that threatened the very heart of the Islamic East. During the 17 years of his reign, he engaged the Mongols of Persia in nine battles. Within Syria, Baybars dealt with the Assassins, a deviant sect that attributes itself falsely to Islam. After seizing their major strongholds between 1271 and 1273 CE, he wiped out the Syrian members of the group.

Baybars also took the offensive against the Christian Armenians who were allies of the Mongols, devastating their lands and plundering their major cities. In 1276 CE, having defeated the Seljuq troops and their Mongol allies, he personally seized Caesarea (modern Kayseri in Turkey) in Cappadocia. To secure Egypt on the south and west, Baybars sent military expeditions into Nubia and Libya, taking personal command in 15 campaigns and often endangering his life.

In the interest of good diplomatic relations with the Byzantine Empire, Baybars sent envoys to the court of Michael VIII Palaeologus in Constantinople. The Byzantine sovereign thereupon ordered the restoration of the ancient mosque and permitted Egyptian merchants and ambassadors to sail through the Hellespont and Bosporus, a body of water, which connects Europe and Asia. One of Baybars’ principal goals during his reign was to acquire more Turkish slaves to be used in the Mamluk army; another was to contract an alliance with the Mongols of the Golden Horde in South Russia against the Mongols of Persia. In 1261 CE Baybars sent an ambassador to the Sicilian king Manfred. Other emissaries to Italy followed, and in 1264 CE Charles of Anjou, later king of Naples and Sicily, sent an emissary with letters and gifts to Cairo, a remarkable testimony to Baybars’ strength and influence. Baybars was also able to sign commercial treaties with such distant sovereigns as James I of Aragon and Alfonso X of León and Castile.

In a brilliant political move, Baybars invited a fugitive descendant of the Abbasid dynasty of Baghdad to Cairo and established him as Caliph —head of the Muslim community — in 1261 CE. Baybars wished to legitimize his Sultanate and to give pre-eminence to his rule in the Muslim world. However, the Abbasid caliphs in Cairo had no practical power in the Mamluk state.

Baybars was more than a military leader or a diplomatic politician. He built canals, improved harbors, and established a regular and fast postal service between Cairo and Damascus, one that required only four days. He built the great mosque and the school bearing his name in Cairo. He was also the first ruler in Egypt to appoint chief justices representing the four main schools of Islamic law.

Sultan Al-Zahir Baybars was a sportsman as well as a warrior, Baybars was fond of hunting, polo, jousting, and archery. He was also a practicing Muslim, a generous almsgiver, and watchful of the morals of his subjects—he issued a prohibition against the use of wine in 1271 CE.

He died in Damascus after drinking a cup of poison intended for someone else and was buried in Damascus under the dome of the present Al-Zahiriyah Library, which he had established.