The Greatest Prophets between Christianity and Islam: 17-Prophet David 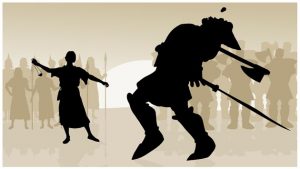 However, Prophet David’s biography in the Bible involves refutations of many suspicions that are aroused about Prophet Muhammad.

Let’s know more about Prophet David’s character in Christianity and Islam according to the Bible and the Qur’an.

In the Bible, Christianity honors and praises Prophet David. For example, in the Old Testament, Prophet David is described as successful in everything he did because God was him.

We read: “David was successful in everything he did because the Lord was with him.” (1 Samuel 18:14)

Islam highly honors and praises Prophet David. The Qur’an tells us that God gave him kingship, prophethood and knowledge. We read:

And David killed Goliath, and Allah gave him the kingship and prophethood and taught him from that which He willed. (Al-Baqarah 2:251)

Prophet David is also described as “turning back to God repeatedly” and “given wisdom and discernment in speech”. We read:

Be patient over what they say and remember Our servant, David, the possessor of strength; indeed, he was one who repeatedly turned back [to Allah]. Indeed, We subjected the mountains [to praise] with him, exalting [ Allah ] in the [late] afternoon and [after] sunrise. And the birds were assembled, all with him repeating [praises]. And We strengthened his kingdom and gave him wisdom and discernment in speech. (Saad 38:17-20)

The Qur’an tells us that God favored David with scriptures “Psalms”. We read:

And We have made some of the prophets exceed others [in various ways], and to David We gave the book [of Psalms]. (Al-Israa’ 17:55)

The Qur’an tells us that God also favored Prophet David with having praises repeated by mountains and birds and the flexibility of iron. We read:

And We certainly gave David from Us bounty. [We said], “O mountains, repeat [Our] praises with him, and the birds [as well].” And We made pliable for him iron, [Commanding him], “Make full coats of mail and calculate [precisely] the links, and work [all of you] righteousness. Indeed I, of what you do, am Seeing.” (Saba’ 34:10-11)

Therefore, the Qur’an tells us that God made David a successor on the earth in his lifetime. We read:

Despite the stated honor and praise of Prophet David by the Bible, it portrays Prophet David’s character in such a way which refutes many suspicions aroused about Prophet Muhammad like violence, concubinage, and polygamy.

The Bible tells us that David killed two hundred Philistines and presented their foreskins as a dowry for the king’s daughter. We read:

And Saul said, “Thus shall ye say to David: ‘The king desireth not any dowry but a hundred foreskins of the Philistines, to be avenged of the king’s enemies.’” But Saul thought to make David fall by the hand of the Philistines. And when his servants told David these words, it pleased David well to be the king’s son-in-law; and the days were not expired. Therefore David arose and went, he and his men, and slew of the Philistines two hundred men; and David brought their foreskins, and they gave them in full measure to the king, that he might be the king’s son-in-law. And Saul gave him Michal his daughter for a wife. (1 Samuel 18:25-27)

The Bible also tells us that Prophet David used to kill men and women without discrimination and attack areas without leaving anyone alive, man or woman. We read:

When David attacked an area, he wouldn’t leave anyone alive, man or woman. He would take the sheep, the cattle, the donkeys, the camels, and the clothes and would then go back to Achish. When Achish asked, “Where did you raid today?” David would say, “The southern plain of Judah,” or “The southern plain of the Jerahmeelites,” or “The southern plain of the Kenites.” David never spared a man or woman so they could be brought back alive to Gath. “Otherwise,” he said, “they might talk about us, and say, ‘David did this or that.’” So this was David’s practice during the entire time he lived in the Philistine countryside. (1 Samuel 27:9-11)

The Bible tells us that Prophet David took for himself an unlimited number of wives and concubines. We read: “And David took more concubines and wives out of Jerusalem after he had come from Hebron; and there were yet sons and daughters born to David.” (2 Samuel 5:13)

According to the Bible, Prophet David’s most prominent wives included Michal, Abigail and Ahinoam. About them, we read:

And Abigail hastened and arose, and rode upon an ass, with five damsels of hers who went after her; and she went after the messengers of David, and became his wife. David also took Ahinoam of Jezreel, and they were also both of them his wives. But Saul had given Michal his daughter, David’s wife, to Palti the son of Laish, who was from Gallim. (1 Samuel 25:42-44)

“And unto David were sons born in Hebron: and his firstborn was Amnon, of Ahinoam the Jezreelitess; and his second, Chileab, of Abigail the wife of Nabal the Carmelite; and the third, Absalom the son of Maacah, the daughter of Talmai king of Geshur; and the fourth, Adonijah the son of Haggith; and the fifth, Shephatiah the son of Abital; and the sixth, Ithream, by Eglah David’s wife. These were born to David in Hebron.” (2 Samuel 3:2-5)

David & the Wife of Uriah, the Hittite

The Bible tells us that Prophet David had committed adultery with Bathsheba, the daughter of Eliam, and the wife of Uriah the Hittite, before he caused Uriah to be killed and married her. We read:

And it came to pass in an eveningtide that David arose from his bed and walked upon the roof of the king’s house. And from the roof he saw a woman washing herself, and the woman was very beautiful to look upon. And David sent and inquired after the woman. And one said, “Is not this Bathsheba, the daughter of Eliam, the wife of Uriah the Hittite?” And David sent messengers, and took her; and she came in unto him, and he lay with her, for she was purified from her uncleanness; and she returned unto her house. And the woman conceived, and sent and told David, and said, “I am with child.” (2 Samuel 11:2-5)

Finally, given the facts that Prophet David in the Bible killed men and women on an equal footing and was so polygamous that he even committed adultery with the wife of Uriah, the Hittite, before causing Uriah to be killed and marrying her, why is Prophet Muhammad blamed for the presumable violence and polygamy?

Prophet Muhammad did not kill women but men only rightfully. He never committed adultery. While he had wives and concubines, he did not have the same number as David in the Bible.