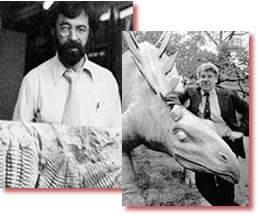 The first hypothesis -that macromutations occur in large numbers, making the emergence of new species possible- conflicts with known facts of genetics.

One rule put forward by R. A. Fisher, one of the last century’s best-known geneticists, and based on observations, clearly invalidates this hypothesis. Fisher states in his book The Genetical Theory of Natural Selection that the likelihood that a particular mutation will become fixed in a population is inversely proportional to its effect on the phenotype.1 Or, to put it another way, the bigger the mutation, the less chance it has of becoming a permanent trait within the group.

It is not hard to see the reason for this. Mutations consist of chance changes in genetic codes, and never have a beneficial influence on organisms’ genetic data. Quite the contrary: individuals affected by mutation undergo serious illnesses and deformities. For this reason, the more an individual is affected by mutation, the less chance it has of surviving.

Ernst Mayr, the doyen of Darwinism, makes this comment on the subject:

The occurrence of genetic monstrosities by mutation … is well substantiated, but they are such evident freaks that these monsters can be designated only as ‘hopeless’. They are so utterly unbalanced that they would not have the slightest chance of escaping elimination through stabilizing selection … the more drastically a mutation affects the phenotype, the more likely it is to reduce fitness. To believe that such a drastic mutation would produce a viable new type, capable of occupying a new adaptive zone, is equivalent to believing in miracles … The finding of a suitable mate for the ‘hopeless monster’ and the establishment of reproductive isolation from the normal members of the parental population seem to me insurmountable difficulties.2

It is obvious that mutations cannot bring about evolutionary development, and this fact places both neo-Darwinism and the punctuated equilibrium theory of evolution in a terrible difficulty. Since mutation is a destructive mechanism, the macromutations that proponents of the punctuated equilibrium theory talk about must have “macro” destructive effects. Some evolutionists place their hopes in mutations in the regulatory genes in DNA. But the feature of destructiveness which applies to other mutations, applies to these, as well. The problem is that mutation is a random change: any kind of random change in a structure as complex as genetic data will lead to harmful results.

In their book The Natural Limits to Biological Change, the geneticist Lane Lester and the population biologist Raymond Bohlin describe the blind alley represented by the notion of macromutation:

The overall factor that has come up again and again is that mutation remains the ultimate source of all genetic variation in any evolutionary model. Being unsatisfied with the prospects of accumulating small point mutations, many are turning to macromutations to explain the origin of evolutionary novelties. Goldschmidt’s hopeful monsters have indeed returned. However, though macromutations of many varieties produce drastic changes, the vast majority will be incapable of survival, let alone show the marks of increasing complexity. If structural gene mutations are inadequate because of their inability to produce significant enough changes, then regulatory and developmental mutations appear even less useful because of the greater likelihood of nonadaptive or even destructive consequences… But one thing seems certain: at present, the thesis that mutations, whether great or small, are capable of producing limitless biological change is more an article of faith than fact.3

Observation and experiment both show that mutations do not enhance genetic data, but rather damage living things. Therefore, it is clearly irrational for proponents of the punctuated equilibrium theory to expect greater success from “mutations” than the mainstream neo-Darwinists have found.