The Orphan in Islamic Law 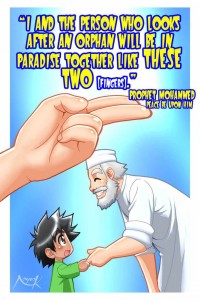 Prophet Muhammad said, holding up his two fingers together: “The one who takes care of an orphan is with me in Paradise like this.”

The Arabic word for orphan is yatim. Its linguistic meaning is simply “something that is singular and alone.” When the word is used in the context of a human being, it means “a minor who has lost his or her father.”

Generally, an orphaned child is confronted by poverty and has a weak position in society. A minor child in such a compromised set of circumstances possesses nothing, not even the knowledge of how to cope. A child does not have the experience and life skills to make it on his or her own.

When such a child reaches the age of majority – and we can define that as the time when the person acquires the ability to manage properly whatever money he or she might possess or come into possession of – then the person ceases to be an orphan as defined by Islamic Law.

`Ali b. Abi Talib relates that the Prophet (peace be upon him) said: “There is no orphan beyond the time of puberty, and there is no observing a day of devotional silence (in Islam).” [Sunan Abi Dawud (2489) and authenticated by Al-Albani]

This hadith is evidence that the legal status of being an orphan ends when the child ceases to be legally a minor.

However, the term “orphan” can apply figuratively to an adult, by way or referring to a person with reference to what that person used to be.

We see this usage from Khadijah’s father, when he gave her to the Prophet (peace be upon him) in marriage. He said: “I give her in marriage to Abu Talib’s orphan.”

He referred to Prophet Muhammad (peace be upon him) as “Abu Talib’s orphan” because his parents died when he was small and Abu Talib had been his guardian.

Allah, in His providence, decreed that the Prophet (peace be upon him) would be sheltered and cared for after losing his parents. Allah says:

Another instance we find the word orphan used to refer to someone who has already attained the age of majority is where Allah says:

“If you fear that you will not deal justly with the orphans, then marry (other) women of your choice…” (An-Nisa’ 4:3)

We also have where Abu Hurayrah relates from the Prophet (peace be upon him): “Seek the orphan girl’s direction from herself. If she remains silent, that is her consent. If she objects, then you have no right to marry her off contrary to her wishes.” [Sunan Abi Dawud (1792) and Sunan al-Nasa’i (3218)]

Then there is where Ibn `Abbas relates that the Prophet (peace be upon him) said: “The widow has more rights to decide her affairs, and the orphans consent is to be sought from her, and her silence is her consent.” [Musnad Ahmad (2247)]

Obviously, a woman does not reach the age of marriage except that the literal status of being an orphan – as defined above – ceases to apply to her. Nevertheless, in the verse of the Qur’an and the two hadith quoted here discussing marriage, the woman is referred to as an “orphan”. This is a metaphorical use of the word, in consideration that the woman had literally been an orphan when she was a minor. Both the literal and figurative meanings of the word apply in Islamic Law. We see both usages quite frequently in the sacred texts.

What does this mean for the responsibilities and rewards of taking care of an orphan’s affairs?

We know that the Prophet (peace be upon him) said, holding up his two fingers together: “The one who takes care of an orphan is with me in Paradise like this.” [Sahih al-Bukhari (5546) and Sahih Muslim (5296)]

The minor that the linguistic meaning of the word “orphan” refers to is certainly included in the meaning of the “orphan” for whose care we are promised this immense reward.

At the same time, we must also consider the orphan who has reached puberty and still does not possess the means or ability to manage his or her own affairs – as is the case with all adolescents and teenagers today. Such an “orphan” is still deserving of the same care that a pre-pubescent orphan is entitled to. This person is entitled to such care under the metaphorical usage of the word “orphan” which is recognized by Islamic Law. This person is likewise entitled to such care by virtue of the poverty of means and circumstances that he or she would face if that care was withdrawn.

Therefore, the individuals and organizations who care for orphans should care for both pre-pubescent orphans as well as those who are older. This care remains until the orphan reaches the age where he or she can act independently.

May Allah bless with success and prosperity all of those who take care of orphans.