The Religion with Allah Is Islam 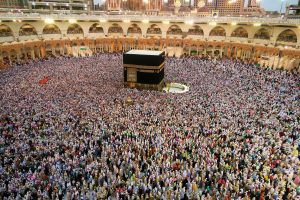 The Religion with Allah Is Islam

Throughout history, Allah has sent His messengers to many peoples. The messengers of Allah summoned mankind to the true path and communicated to them His ways.

However today, it is a widespread belief that what had been revealed through various messengers to mankind were different religions. This is a misconception. The religions Allah revealed by Allah to separate peoples in distinct periods were the same. For instance, Jesus (as) abolished some of the prohibitions brought by the preceding religion.

However, there are in principle no huge differences between the religions revealed by Allah. What has been revealed to the former prophets, to Musa (Moses) (as), to Jesus (as) and to the last Prophet, may Allah bless him and grant him peace, are essentially the same. The verses that tell about this are as follows:

“Say, “We believe in Allah and what has been sent down to us and what was sent down to Ibrahim (Abraham), Isma’il (Ishmael) and Ishaq (Isaac) and Ya’qub (Jacob) and the Tribes, and what Musa (Moses) and ‘Isa and all the Prophets were given by their Lord. We do not differentiate between any of them. We are Muslims submitted to Him. If anyone desires anything other than Islam as a religion, it will not be accepted from him, and in the Hereafter he will be among the losers.”” (Aal `Imran: 84-85)

As related in the above-mentioned verse, the right way revealed to man is Islam. What we understand from the Qur’an is that all the prophets summoned their peoples to a common way.

In another verse, Allah ordains: “… I am pleased with Islam as a religion (deen) for you!” (Al-Ma’idah: 3) Allah sent His messengers to convey this religion, the one He is pleased with, to their peoples and thus warn mankind. Each person, to whom Allah’s message is conveyed, and who is thus summoned to this religion is held responsible for adhering to it.

However, some societies have accepted the message while others have denied it. In some societies, on the other hand, the right way degenerated into perverted beliefs after the death of their messenger. This is related in the Qur’an as follows:

“The Religion with Allah is Islam. Those given the Book only differed after knowledge had come to them, envying one another. As for those who reject Allah’s Signs, Allah is swift at reckoning.” (Aal `Imran: 19)

Throughout his life, Jesus (as) called his people to live by the religion (deen) revealed by Allah and reminded them to be true slaves of Allah. He instructed them in the commandments of the Injil – the revelation granted to him fragments of which may survive in parts of the Gospels. That book affirmed the commandments of the Tawrah – the revelation granted to Musa (as) some of which remains in the Torah and in the Old Testament – which had by then been corrupted.

Criticizing the improper teachings of the rabbis who were responsible for the degeneration of the true religion (deen), Jesus (as) abolished rules that were invented by the rabbis themselves and through which they derived personal gain. He summoned the Children of Israel to the unity of Allah, to truthfulness, and to virtuous conduct. The related verse in the Qur’an follows:

“I come confirming the Torah I find already there, and to make lawful for you some of what was previously forbidden to you. I have brought you a sign from your Lord. So have fear of Allah and obey me.” (Aal `Imran: 50)

However, after Jesus (as) left the earth, some of his later followers started to corrupt the revelation. Under the influence of some pagan ideas from the Greeks, they developed the belief in “The Trinity” (the Father, the Son and the Holy Ghost). Under the name of Christianity, they adhered to a very different religion. Today, one fourth of the world population practice a Christianity popularly believed to be based on the teachings of Jesus (as).

However, the facts are otherwise. Long years after the disappearance of Jesus (as), unidentified people authored the books of what we know today as the New Testament, and they wrote them in Greek whereas the language of Jesus (as) and his disciples was Aramaic, a language close to Arabic. In succeeding ages, historians compiled these writings. Consequently, Christianity today has lost much of Jesus’ (as) original teaching.

After Jesus (as), Allah sent another messenger from a different tribe in order that through him He could reveal the original religion to the world, and He endowed him with a noble book. This messenger is the Prophet Muhammad (saas) and the book is the Qur’an, the only unaltered revelation.

The Qur’an addresses all people in the world. All people from all ages will be held responsible for this book, if they have been exposed to the message of Islam. They will be judged according to the Qur’an on the Day of Judgement. In our day especially, all the nations of the world in a sense are united and have almost become like a single tribe, thanks to technological breakthroughs. One academic referred to the world today as ‘the global village’.

Therefore, there are few people in the world today who are unaware of the existence of the Qur’an and who are hence uninformed about Islam. Despite this, a certain part of people have faith in the Qur’an. Among those having such faith (iman), however, many do not live by the principles proclaimed in the Qur’an.

We expect that Jesus (as) will come back to earth and summon people to the right way. Allah gives the good tidings of this in the Qur’an. Jesus (as) was raised up to the presence of Allah and has not yet died a physical death. After a while, he will return and make Islam prevail in the world.

To the best of their abilities, both the Christian and the Muslim worlds are preparing to meet this blessed visitor and not to repeat the offences committed against him in history.

Adapted with editorial adjustments from the author’s book: Jesus Will Return.