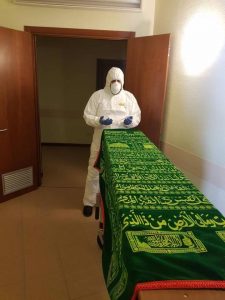 Washing the dead is a devotional act of worship.

The Assembly of Muslim Jurists of America (AMJA) has received several inquiries regarding the rights of Muslims who die while infected with COVID-19 (novel coronavirus). In response, the AMJA issued the following fatwa:

Washing of the Dead

The ritual washing of the dead is one of the communal obligations based on the prophetic command and the unanimous agreement of Muslims. It is, therefore, inappropriate to bury a believer without the ritual wash. All capable Muslims of his neighborhood will incur a sin if they fail to perform that obligation. This is the case in all communal obligations: if they are performed by some, all will be relieved of the burden, and if they are not, all will be liable.

Washing the dead is like washing the living: it suffices to pour water on the entire body, without rubbing, which is only required by the Malikis.

Washing the dead is a devotional act of worship, so it must be done by a Muslim, and a non-Muslim may only be involved, if required, to oversee the protective measures and instruct the washers on their utilization.

It is incumbent upon the Muslims who take on this communal obligation to learn and practice those protective measures and comply diligently with the instructions of the public health agencies.

There are the rules to be applied in normal scenarios. We must not violate them as long as we have the capacity to observe them.

It is permissible in ritual washing to simply pour water on the body, and in the case of the presence of contagious diseases, the water can be poured on top of the cloth (that is not water repellent).

Some jurists allowed the non-marriageable kin of a woman to wash her – in the absence of women – by pouring water on top of her clothes. The same may be said about someone who has a contagious disease, if the transmission of the disease is feared. The water will undoubtedly reach the body through the non-water-repellent cloth if enough amount was poured.

If washing was not possible because of the lack of water or the inability to use it, the alternative ritual purification by tayammum is resorted to. The dead are offered tayammum (dry ablution), just as the living would perform it, by striking the dust (or a stone) with the two hands and then wiping the face and hands of the deceased with them, even while wearing gloves.

If dry ablution was also prevented or its harm was justifiably feared, then the obligation drops all together. The dead should be offered the funeral prayer and buried.

The default regarding those who die with COVID-19, as far as we have learned from the experts at the time of writing this fatwa, is that there is no likely harm in washing them while following the precautions advised by the public health agencies.

Based on this, if the relevant authorities did not prevent their washing, and the specialists did not warn of its likely harm, then we must not fail to perform this obligation, even by pouring water on the body without touching it at all.

This is the right of the casualties of this epidemic on the Muslim community: to wash them and fulfill their rights before their burial.

If the relevant authorities banned washing them, or the specialists warned of its likely harm, then we do tayammum (dry ablution) instead, and if that too was banned, then the obligation is lifted all together.

If washing was permitted, but the washer was required to self-quarantine, as some have relayed to AMJA to be the case in certain places, and no one steps forward to do this from the deceased’s family or others, then the obligation is lifted because of this hardship.

Hoping for the reward of the martyr for people who die in such epidemics does not mean that they may not be washed, because those rulings apply only to the martyrs of the battlefield.

Shrouding is another obligation on the dead, so if it is not possible according to the way prescribed in the Sunnah, then they may be shrouded in the hospital gowns, and if the body was received in a bag that is not to be opened, then the bag will suffice in covering their nakedness. The funeral prayer will be offered, and they will be buried.

The funeral prayer is one of the rights of our dead, and it is a communal obligation: if one person performed it, the rest will not be liable, and if there were more than one person, they pray in congregation behind the imam, while keeping the recommended distance between each of them. This will not invalidate their prayer. Whoever wants to pray at the grave afterwards or perform the absentee prayer, they may do that. All of this would be permissible and accepted by the All-Hearing, All-Knowing, Most Generous and Gracious Lord.

It is permissible, if requested by the family, to livestream the prayer and burial and any part that does not involve showing the nakedness of the deceased or violating their dignity.

Some of these online platforms offer private livestreaming that can be watched by the family only and those close to the deceased, to bring solace to their hearts and ease the pain of their inability to be present.

These are the rights of the dead Muslims on us: we become exempt from fulfilling them only in the case of a valid excuse. Whenever they are not performed, this will not harm the dead in any way, for they are returning to the Just, the Generous, the Most Merciful.

May Allah guide all to that which makes Him pleased, and He knows best.