The Role the Jews during the Early Days of Islam

Jews in the Quran 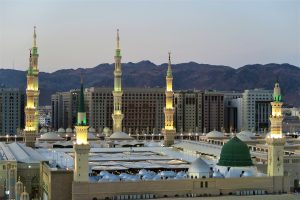 The Quran discusses the Jews -or the Children of Israel – in more detail than it does with the people of any other nation.

And though the Jews played an important role only during the Madinah era of the Prophet’s biography, about 50 Makkan verses of the Quran make some mention of their history.

Each Quranic verse about the Jews was suitable to the specific phase of Da`wah that the Prophet had reached at the time.

In Makkan verses of the Quran, Allah reminds Muslims that the disbelief of the Quraish was not something new; rather, the people of previous nations such as `Aad, Thamud, Fir`aun (Pharaoh), the Children of Israel, the people of Tubba`, and the people of Ar-Rass also disbelieved and harmed the Prophets who were sent to them.

Consider, for instance, the following verses from Surat Al-Muzzammil, which was, in terms of chronological order, the third Chapter of the Quran to be revealed to the Prophet:

Verily, We have sent to you (O men) a Messenger (Muhammad) to be a witness over you, as We did send a Messenger [Musa (Moses)] to Fir`aun (Pharaoh) . But Fir`aun (Pharaoh) disobeyed the Messenger (Moses), so We seized him with a severe punishment. Then how can you avoid the punishment, if you disbelieve, on a day that will make the children grey-headed (i.e., the Day of Resurrection)? Whereon the heaven will be cleft asunder? His Promise is certainly to be accomplished. Verily, this is an admonition, therefore, whosoever will, let him take a Path to His Lord! (Al-Muzzammil 73:15-19)

How the Jews Treated Previous Prophets

Not a single Prophet was saved from being harmed, no matter how honored and respected a given Prophet was among his people. Nuh (Noah), Hud, Musa, Salih, Lut and Shuaib were all common members of their respective societies, and they were all persecuted and harmed.

But so was Dawud (David), who was a powerful king, and whose miracles were witnessed firsthand by his people- for example, mountains glorified Allah with him, and birds were brought to life so that they could hear his recitation. What, then, did the Children of Israel write about him?

They ascribed many evil actions to him in their writings, though, in reality, he was a pious worshipper. Similarly, they ascribed evil to Maryam (Virgin Mary). Allah related to us the miraculous nature of her pregnancy and delivery.

If that was the attitude of the People of the Book, people who had in their hands the Torah, a revealed book from Allah- then it is no surprise that the Quraish answered the Prophet’s invitation to embrace the truth with disbelief.

The Children of Israel even mistreated the greatest of their Prophets, Musa. In Surat Ta-Ha, Allah relates how they rebelled against Allah’s commands and disobeyed Prophet Musa.

As soon as Musa left them in order to speak with His Lord, they plotted against him. They gathered the jewelry they had with them and Samiri made out of it a calf. They began to worship the calf, and they even made a heinous claim, which is related in this Verse:

And he extracted for them [the statue of] a calf which had a lowing sound, and they said, “This is your god and the god of Moses, but he forgot.” (Ta-Ha 20:88)

When Musa later found out about what had happened, he asked Samiri why he did such a foolish and misguided thing. Allah related Samiri’s answer in the Noble Quran:

The Covenant Taken by the Children of Israel

Those who follow the Messenger, the unlettered prophet, whom they find written in what they have of the Torah and the Gospel, who enjoins upon them what is right and forbids them what is wrong and makes lawful for them the good things and prohibits for them the evil and relieves them of their burden and the shackles which were upon them. So they who have believed in him, honored him, supported him and followed the light which was sent down with him – it is those who will be the successful. (Al-Araf 7:158)

Although they spoke lies about Islam and the Prophet, the Quraish soon realized that they were unable to say anything against Islam that was true or even seemingly true or based upon proofs.

Frustrated by his people’s situation, An-Nadr ibn Al-Harith expressed Quraish’s inability to put down the message of Islam by saying to the other leaders of the Quraish, “O people of Quraish, by Allah, a matter has descended upon you for which you have not yet been able to make a counterattack through the use of trickery. So consider your situation, for by Allah, a great matter indeed has befallen you”

The leaders of the Quraish thereafter agreed to send An-Nadr ibn Al-Harith and Uqbah ibn Abu Muait to Jewish scholars in Al-Madinah. They wanted to learn more about the reality of the Prophet’s message, not because they wanted to follow it, but because they felt that the Jews might be able to provide them with information that they could use to debate the Prophet.

The leaders of the Quraish were not so ignorant as not to know that the malice of the Jews was directed towards all Prophets.

The Coming of Prophet Muhammad

The coming of Prophet Muhammad (peace be upon him) was a great blow to the plans of the Jews. One of the main reasons why they lived in the Arabian Peninsula for so many years was that they knew that a Prophet was going to be sent to that area; they ardently hoped that that Prophet would be chosen from their ranks, so that he could put an end to their differences, and so that he could help them against their enemies.

The polytheists of Makkah and the Jews of Al-Madinah shared one common goal: bringing an end to the Prophet’s Dawah. And so the Jews provided Makkah’s delegates with certain questions which they hoped the Prophet would not be able to answer.

Ibn Abbas (may Allah be pleased with him) said: The Quraish sent An-Nadr ibn Al-Harith and Uqbah ibn Abu Mu`ait to meet with Jewish scholars in Al-Madinah.

Quraish’s leaders said to their two delegates, “Ask them about Muhammad, describe him to them, and inform them about what he says. For indeed, they are the people of the first book (i.e., the Torah), and they have knowledge that we do not possess – from the knowledge of the Prophets. The two of them left until they reached Al-Madinah.

Once there, they asked Jewish scholars about the Messenger of Allah. The two of them described his affair to them, as well as some of his sayings. And they said, ‘Verily, you are the people of the Torah, and we have indeed come to you, so that you can inform us about this person who is with us (i.e., the Prophet).’

The Jewish scholars said, “Ask him about three (matters) that we will command you with. If he informs you about them, then he is a Prophet, who is sent (by Allah). And if he does not do so, then the man is a fabricator of lies.

If he informs you about these matters, then he is a Prophet, and so you must then follow him. If he doesn’t inform you (about the answers to these questions), then he is a man who fabricates lies, and you should act regarding his situation as you see fit.’

An-Nadr and Uqbah then set out until they reached the Quraish in Makkah. They said, ‘O people of Quraish, we have come to you with that which will resolve what is happening between you and Muhammad.

The Messenger of Allah (peace be upon him) said to them, ‘I will inform you tomorrow concerning what you asked me about but he didn’t say, ‘In Sha’ Allah (If Allah wills). ‘ They left him, and the Messenger of Allah remained (in waiting) for fifteen nights without Allah sending any revelation to him concerning what had happened (concerning the questions of the Quraish). Nor did Jibril come to him (during those nights).

(This continued) until the people of Makkah plunged into evil talk, saying, ‘Muhammad had promised us for the next day, and today is day fifteen. We have woken up today without him having informed us about anything we asked him about.’ (And the situation continued) until the pause of revelation saddened the Messenger of Allah, and it became very hard upon him (to know and hear) what the people of Makkah were saying.

Then, Jibril came to him from Allah the Almighty with Quranic verses about the People of the Cave. In it, the Prophet is admonished for becoming sad on their account.

(Also in it) is news of what they asked him about concerning the matters of the young men and of the travelling man (and of the Ar-Ruh). (And in it) is the saying of Allah:

And they ask you, [O Muhammad], about the soul. Say, “The soul is of the affair of my Lord. And mankind have not been given of knowledge except a little.” (Al-Israa’ 17:85)

The Jews of Al-Madinah provided questions to the Quraish, questions that were answered in Surat Al-Kahf. Although their questions were answered, they shouldn’t have asked them in the first place. Since when did not knowing the answer to a question prove a Prophet to be false? Prophets are human beings, and they have knowledge of the unseen world, but only that knowledge which Allah reveals to them.

The Jews should have considered the case of a specific Prophet that was sent to them, Musa, one of the greatest of Prophets  from the Children of Israel.

Although he was a Prophet; sent from Allah, Musa did not know the interpretation of the three events that took place while he was in the company of Khidr; in fact, he objected to what Khidr did, even though, as he later found out, what Khidr did in each of the three situations was ultimately correct.

None of this had an effect on Musa’s status as a Prophet, and the Children of Israel didn’t doubt his Prophethood. That being the case, what right did they have to use the questions they thought up to ascertain the truthfulness of Prophet Muhammad

In addition to answering the questions of the Jewish scholars, Allah also used the situation as a means of alluding to near relief and help for the Muslims. For just as the young men of ‘the Cave’ found shelter, the Prophet’s Companions  were soon to find shelter in Al-Madinah.

Source: Taken with modifications from the author’s “The Noble Life of the Prophet Muhammad”.