The Six Articles of Faith a Muslim Must Believe in

Practically speaking, a person who is a Muslim or would like to be a Muslim must believe in six articles of faith. What are they? 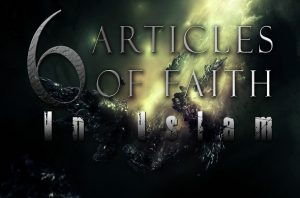 The Six Articles of Faith a Muslim Must Believe in.

1- Belief in Allah (the one true God) – in His existence, His Oneness (Tawheed), His Lordship, and His unique names and attributes; and that He is the only one deserving to be worshiped.

2- Belief in Allah’s angels, who were created by Allah to praise Him, obey His commandments, and carry out His orders.

3- Belief in Allah’s revelations including the original Word of Allah revealed to Moses and Jesus (not the human writings and stories narrated according to various authors as found in the Bible). The  Qur’an is the final, pure, and authentic Word of God, sent to Prophet Muhammad (peace be upon him).

4- Belief in Allah’s messengers and prophets including Adam, Noah, Abraham, Moses, John the Baptist, Jesus, and Muhammad. So, a Muslim is not a true believer if he or she does not believe in Moses and Jesus as prophets sent from the one true God (Allah), the Creator.

5- Belief in the Last Day, the Day of Judgment and accountability. All mankind will be judged by Allah according to their faith and their deeds and actions. At the end of judgment, who will be admitted to a happy, eternal life (Paradise) and who will be thrown into Hell Fire?

6- Belief in the destiny decreed by Allah and His ultimate knowledge of all things. This makes believers trust in Allah. They are satisfied, content, and confident in whatever Allah decrees for them whether good or bad.

They try not to despair, not to get depressed, hopeless, or despondent when crises or difficulties strike. They turn to Allah for help, support, and reward.

This beautiful faith in Allah and His decree makes Muslims feel peace of mind and contentment in spite of all the aggression, invasion, occupation, and exploitation of their land, oil, and wealth, in spite of the injustice, bias, discrimination, and defamation they suffer from.

These are briefly the articles of faith in Islam that a true believer must believe in.

The article is excerpted from the author’s “Have You Discovered It’s Real Beauty?”

Dr. Naji Al-Arfaj He is the Director of the Inter-Cultural Communication and Dialogue Center in Saudi Arabia. He attended Michigan State University, USA and completed his M.A. and Ph.D. in Applied Linguistics in 1995. He spent more than 20 years researching comparative religion. He is the author of several books, and presents radio and TV programs.

The Conditions of the Shahadah to Be Accepted by God

The Definition of Sunnah

A Gift for the 27th Night: A Ramadan Du`a’ with English Translation