The Skilful Camouflage of the Scorpion Fish 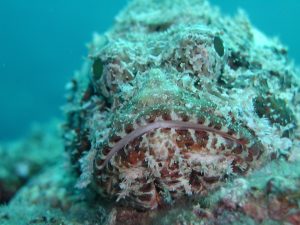 Allah created all creatures together with the attributes they possess and in harmony with the environments in which they live.

The appearance of a scorpion fish is very colourful. These fish are the same colour as the coral among which they live. The red-and-white striped scorpion fish can conceal itself by camouflage among the coral, which is virtually the same colours. That way it escapes the attention of predators and reduces the risk of becoming prey. Again by virtue of this coloration, it can easily draw near to its own prey.

Take a careful look at the scorpion fish – seen in the picture atop – and you will realize how hard it really is to notice their presence in their environments.

Like scorpion fish, many other marine creatures cannot be distinguished from their environments. Their presence is only noticed when they move. These perfectly camouflaged creatures use their coloration to enable them to hunt, to reproduce and to give various signals to other creatures. But how did this harmony come about? Who made the body of a fish the same colour as the reefs in which it lives, and made it look even more like the reefs by giving it a projecting shape?

Chance can never give a creature the same colour as the environment in which it lives. A fish, shrimp or crab can neither have the knowledge of colour nor be able to produce systems in their own bodies to change their colour. Such great systems can only be created by Almighty Allah, Who is All-Merciful, All-Powerful.

Allah created all creatures together with the attributes they possess and in harmony with the environments in which they live. Allah has informed us in the Qur’an that He has knowledge of all creatures He created:

“Does He Who created not then know? He is the All-Pervading, the All-Aware. It is He Who made the earth submissive to you, so walk its broad trails and eat what it provides. The Resurrection is to Him.” (Al-Mulk: 14-15)