The Special Cooling System of Gazelles 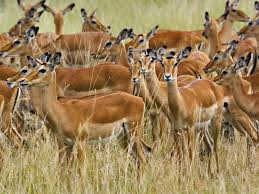 All creatures have body structures consisting of systems that would not work even if one of the components were missing, such as the cooling system of gazelles.

The Special Cooling System of Gazelles

We may give the fast running gazelles of Africa as an example. Like many others, this animal, too, has to run away from its enemies to survive because it does not have any other defence mechanism. Yet, this fast running increases its body heat excessively, which is very dangerous for the gazelle because as the body heat increases, so does the gazelle’s brain heat. However, in order for the gazelle to survive, its brain heat needs to be cooler than that of the body. So you may wonder how it is that gazelles don’t die.

The answer to this question leads us to the fact of creation.

The brain of a gazelle is cooled by a special cooling system located on the right side of its head. Gazelles and other fast-running animals have breathing canals. Hundreds of small blood veins spread in the large blood accumulations behind these canals. The air the gazelle inhales cools this area and hence the blood that passes through these small blood veins. These small veins then unite in a single blood vessel that conveys blood to the brain. Thanks to this system, the gazelle is not affected by the sharp increase in its body heat while running.

You must have already concluded that such a perfect system could not have come into existence spontaneously over time. That is because the lack of this system, which is required for cooling the brain, would mean the death of the gazelle during its very first run.

As seen in the cooling system of gazelles, there is perfect design in living creatures. In other words, the body structure and the organs of a living thing cannot possibly come into existence over time as claimed by evolutionists.

All creatures have body structures consisting of systems that would not work even if one of the components were missing, such as the cooling system of gazelles. This proves that living creatures did not come into existence over time as a result of coincidences as evolutionists claim, but Allah created them. It is crystal clear to those who can take heed and use their intellect. Allah commands in a verse:

“The Lord of the East and the West and everything between them if you used your intellect.” (Ash-Shu`ara’ 26: 28)

“Say: ‘Who is the Lord of the heavens and the earth?’ Say: ‘Allah.’ Say: ‘So why have you taken protectors apart from Him who possess no power to help or harm themselves?’ Say: ‘Are the blind and seeing equal? Or are darkness and light the same? Or have they assigned partners to Allah Who create as He creates so that all creating seems the same to them?’ Say: ‘Allah is the Creator of everything. He is the One, the All-Conquering.’”(Al-Ra`d: 16)

“He [Allah] hath created the heavens without supports that ye can see and hath cast into the earth firm hills, so that it quake not with you; and He hath dispersed therein all kinds of beasts. And We send down water from the sky and We cause (plants) of every goodly kind to grow therein. This is the Creation of Allah. Now show me that which those (ye worship) beside Him have created. Nay, but the wrongdoers are in error manifest!”(Luqman 31: 10-11)

“We shall show them Our portents on the horizons and within themselves until it will be manifest unto them that it is the Truth. Doth not thy Lord suffice since He is Witness over all things? How! Are they still in doubt about the meeting with their Lord? Lo! Is not He surrounding all things?”(Fussilat 41: 53-54)