The Spirit of Islam: General Role of Religion in Human Life 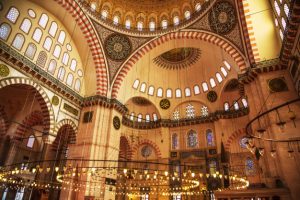 The immense benefit which religion thus confers upon man is the realization that he is, and never can cease to be, a well-planned unit.

What we call the ‘religious attitude’ is the natural outcome of man’s intellectual and biological constitution.

His reasoning stops before impregnable walls. He can, therefore, do two things only. The first is, to give up all attempts at understanding life as a totality.

In this case, man will rely upon the evidence of external experiences alone and will limit his conclusions to their sphere.

Thus he will be able to understand single fragments of life, which may increase in number and clarity as rapidly or as slowly as human knowledge of Nature increases, but will, none the less, always remain only fragments – the grasp of the totality itself remaining beyond the methodical equipment of human reason. This is the way the natural sciences go.

The other possibility – which may well exist side by side with the scientific one – is the way of religion. It leads man, by means of an inner, mostly intuitive, experience, to the acceptance of a unitary explanation of life, generally on the assumption that there exists a supreme Creative Power which governs the Universe according to some pre-conceived plan above and beyond human understanding.

As has just been said, this conception does not necessarily preclude man from an investigation of such facts and fragments of life as offer themselves for external observation; there is no inherent antagonism between the external (scientific) and internal (religious) perception.

But the latter is, in fact, the only speculative possibility to conceive all life as a unity of essence and motive power; in short, as a well-balanced, harmonious totality.

The term ‘harmonious’, though so terribly misused, is very important in this connection, because it implies a corresponding attitude in man himself.

The religious man knows that whatever happens to him and within him can never be the result of a blind play of forces without consciousness and purpose; he believes it to be the outcome of God’s conscious will alone, and, therefore, organically integrated with a universal plan.

In this way, man is enabled to solve the bitter antagonism between the human Self and the objective world of facts and appearances which is called Nature.

The human being, with all the intricate mechanism of his soul, with all his desires and fears, his feelings and his speculative uncertainties, sees himself faced by a Nature in which bounty and cruelty, danger and security are mixed in a wondrous, inexplicable way and apparently work on lines entirely different from the methods and the structure of the human mind.

Never has purely intellectual philosophy or experimental science been able to solve this conflict.

This exactly is the point where religion steps in. In the light of religious perception and experience, the human, self-conscious Self and the mute, seemingly irresponsible Nature are brought into a relation of spiritual harmony; because both, the individual consciousness of man and the Nature that surrounds him and is within him, are nothing but co-ordinate, if different, manifestations of one and the same Creative Will.

The immense benefit which religion thus confers upon man is the realization that he is, and never can cease to be, a well-planned unit in the eternal movement of Creation: a definite part in the infinite organism of universal destiny.

The psychological consequence of this conception is a deep feeling of spiritual security – that balance between hopes and fears which distinguishes the positively religious man, whatever his religion, from the irreligious.