The Status of Women in Islam: (Part 3: The Spiritual Aspect)

Status of Women in Islam 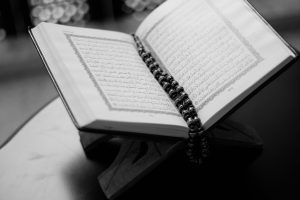 In the midst of the darkness that engulfed the world, the divine revelation echoed in the wide desert of Arabia with a fresh, noble, and universal message to humanity: O Mankind, keep your duty to your Lord who created you from a single soul and from it created its mate (of same kind) and from them twain has spread a multitude of men and women. (Quran 4:1)

A scholar who pondered about this verse states:

“It is believed that there is no text, old or new, that deals with the humanity of the woman from all aspects with such amazing brevity, eloquence, depth, and originality as this divine decree.”

Stressing this noble and natural conception, the Quran states:

He (God) it is who did create you from a single soul and therefrom did create his mate, that he might dwell with her (in love)… (Quran 7:189)

And Allah has given you mates of your own nature, and has given you from your mates, children and grandchildren, and has made provision of good things for you. Is it then in vanity that they believe and in the grace of God that they disbelieve? (Quran 16:72)

The rest of this series outlines the position of Islam regarding the status of women in society from its various aspects – spiritually, socially, economically and politically.

The Status of Women in Islam: The Spiritual Aspect

The Quran provides clear-cut evidence that woman is completely equated with man in the sight of God in terms of her rights and responsibilities. The Qur’an states:

…So their Lord accepted their prayers, (saying): I will not suffer to be lost the work of any of you whether male or female. You proceed one from another… (Quran 3:195)

Whoever works righteousness, man or woman, and has faith, verily to him will We give a new life that is good and pure, and We will bestow on such their reward according to their actions. (Quran 16:97, see also 4:124)

Woman according to the Quran is not blamed for Adam’s first mistake. Both were jointly wrong in their disobedience to God, both repented, and both were forgiven. (Quran 2:36, 7:20 – 24).

In terms of religious obligations, such as the Daily Prayers, Fasting, Poor-due, and Pilgrimage, woman is no different from man.

In some cases indeed, woman has certain advantages over man. For example, the woman is exempted from the daily prayers and from fasting during her menstrual periods and forty days after childbirth.

She is also exempted from fasting during her pregnancy and when she is nursing her baby if there is any threat to her health or her baby’s.

Although women can and did go into the mosque during the days of the prophet and thereafter attendance to the Friday congregational prayers is optional for them while it is mandatory for men (on Friday).

This is clearly a tender touch of the Islamic teachings for they are considerate of the fact that a woman may be nursing her baby or caring for him, and thus may be unable to go out to the mosque at the time of the prayers.

They also take into account the physiological and psychological changes associated with her natural female functions.