The Status of Women in Islam: (Part 4: The Social Aspect)

The Status of Women in Islam: The Social Aspect 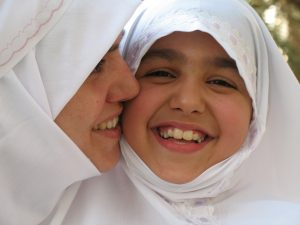 a) As a child and an adolescent

Despite the social acceptance of female infanticide among some Arabian tribes, the Quran forbade this custom, and considered it a crime like any other murder.

And when the female (infant) buried alive – is questioned, for what crime she was killed. (Quran 81:8-9)

Criticizing the attitudes of such parents who reject their female children, the Quran states:

When news is brought to one of them, of (the Birth of) a female (child), his face darkens and he is filled with inward grief! With shame does he hide himself from his people because of the bad news he has had! Shall he retain her on (sufferance) and contempt, or bury her in the dust? Ah! What an evil (choice) they decide on? (Quran 16:58-59)

Far from saving the girl’s life so that she may later suffer injustice and inequality, Islam requires kind and just treatment for her.

Among the sayings of Prophet Muhammad (peace be upon him) in this regard are the following:

Whosoever has a daughter and he does not bury her alive, does not insult her, and does not favor his son over her, God will enter him into Paradise. (Ibn Hanbal)

Whosoever supports two daughters till they mature, he and I will come in the day of judgment as this (and he pointed with his two fingers held together).

A similar hadith deals in like manner with one who supports two sisters. (Ibn Hanbal)

The right of females to seek knowledge is not different from that of males. Prophet Muhammad said: “Seeking knowledge is mandatory for every Muslim”. (Al-Bayhaqi)

Muslim as used here including both males and females.

The Quran clearly indicates that marriage is sharing between the two halves of the society, and that its objectives, beside perpetuating human life, are emotional well-being and spiritual harmony. Its bases are love and mercy.

Among the most impressive verses in the Quran about marriage is the following:

And among His signs is this: That He created mates for you from yourselves that you may find rest, peace of mind in them, and He ordained between you love and mercy. Lo, herein indeed are signs for people who reflect. (Quran 30:21)

According to Islamic Law, women cannot be forced to marry anyone without their consent. Ibn Abbas reported that a girl came to the Messenger of God, Muhammad, and she reported that her father had forced her to marry without her consent.

The Messenger of God gave her the choice . . . (between accepting the marriage or invalidating it). (Ibn Hanbal)

In another version, the girl said: “Actually I accept this marriage but I wanted to let women know that parents have no right (to force a husband on them)” (Ibn Majah)

Besides all other provisions for her protection at the time of marriage, it was specifically decreed that woman has the full right to her mahr, a marriage gift, which is presented to her by her husband and is included in the nuptial contract, and that such ownership does not transfer to her father or husband.

The concept of mahr in Islam is neither an actual or symbolic price for the woman, as was the case in certain cultures, but rather it is a gift symbolizing love and affection.

The rules for married life in Islam are clear and in harmony with upright human nature. In consideration of the physiological and psychological make-up of man and woman, both have equal rights and claims on one another, except for one responsibility, that of leadership.

This is a matter which is natural in any collective life and which is consistent with the nature of man. The Quran thus states:

And they (women) have rights similar to those (of men) over them, and men are a degree above them. (Quran 2:228)

Such degree is qiwamah (maintenance and protection). This refers to that natural difference between the sexes which entitles the weaker sex to protection.

It implies no superiority or advantage before the law. Yet, man’s role of leadership in relation to his family does not mean the husband’s dictatorship over his wife.

Islam emphasizes the importance of taking counsel and mutual agreement in family decisions. The Quran gives us an example:

…If they (husband wife) desire to wean the child by mutual consent and (after) consultation, there is no blame on them… (Quran 2:233)

Over and above her basic rights as a wife comes the right which is emphasized by the Quran and is strongly recommended by the Prophet; kind treatment and companionship.

…But consort with them in kindness, for if you hate them it may happen that you hate a thing wherein God has placed much good. (Quran 4:19)

The best of you is the best to his family and I am the best among you to my family. The most perfect believers are the best in conduct and best of you are those who are best to their wives. (Ibn Hanbal)

Behold, many women came to Muhammad’s wives complaining against their husbands (because they beat them) – – those (husbands) are not the best of you.

To provide for the stability of the family, however, and in order to protect it from hasty decisions under temporary emotional stress, certain steps and waiting periods should be observed by men and women seeking divorce.

Considering the relatively more emotional nature of women, a good reason for asking for divorce should be brought before the judge.

Like the man, however, the woman can divorce her husband without resorting to the court, if the nuptial contract allows that. More specifically, some aspects of Islamic Law concerning marriage and divorce are interesting and are worthy of separate treatment.

When the continuation of the marriage relationship is impossible for any reason, men are still taught to seek a gracious end for it. The Quran states about such cases:

When you divorce women, and they reach their prescribed term, then retain them in kindness and retain them not for injury so that you transgress (the limits). (Quran 2:231) (See also Quran 2:229 and 33:49).

c) As a mother

Islam considered kindness to parents next to the worship of God.

Moreover, the Quran has a special recommendation for the good treatment of mothers:

Your Lord has decreed that you worship none save Him, and that you be kind to your parents… (Quran 17:23)

A famous saying of the Prophet is “Paradise is at the feet of mothers.” (An-Nasai, Ibn Majah and Ahmad)

“It is the generous (in character) who is good to women, and it is the wicked who insults them.”