The Two Supererogatory Rak’ahs of the Dawn Prayer

Of these supererogatory prayers which are regarded as sunnah mu’akkadah, there are ten or twelve rak’ahs (units of prayer) that are highly recommended to be performed on a daily basis. 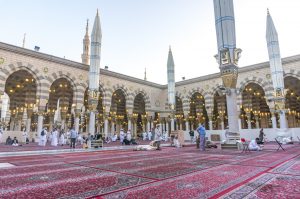 The Prophet (ﷺ) said, “The two rak’ahs before the dawn (Fajr) prayer are better than this world and all it contains.”

When the time of al-Fajr Prayer is due, it is recommended to perform two rak’ahs individually between Adhan (the call to prayer) and Iqamah (the second call to prayer).

Prophet Muhammad (Allah bless him and grant him peace) never missed performing them whether he was resident or travelling. ’A’ishah (May Allah be pleased with her) reported:

The Prophet (ﷺ) said, “The two rak’ahs before the dawn (Fajr) prayer are better than this world and all it contains.” (Muslim)

On the authority of Abu Hurayrah (may Allah be pleased with him), who said that the Messenger of Allah (ﷺ) said:

Allah (mighty and sublime be He) said: Whosoever shows enmity to someone devoted to Me, I shall be at war with him. My servant draws not near to Me with anything more loved by Me than the religious duties I have enjoined upon him, and My servant continues to draw near to Me with supererogatory works so that I shall love him. When I love him I am his hearing with which he hears, his seeing with which he sees, his hand with which he strikes and his foot with which he walks. Were he to ask [something] of Me, I would surely give it to him, and were he to ask Me for refuge, I would surely grant him it. I do not hesitate about anything as much as I hesitate about [seizing] the soul of My faithful servant: he hates death and I hate hurting him. (Al-Bukhari)

What verses to recite during the two supererogatory rak’ahs of Al-Fajr?

In another narration related by Muslim, Prophet Muhammad (Allah bless him and grant him peace) would recite the following verses:

At the first rak’ah after reciting surat al-Fatihah, he would recite:

At the second rak’ah after reciting surat al-Fatihah, he would recite:

Should the two rak’ahs be short or long?

They are recommended to be short. Narrated `A’isha:

The Prophet (p.b.u.h) used to make the two rak`at before the Fajr prayer so light that I would wonder whether he recited Al-Fatiha (or not). (Al-bukhari and Muslim)

It should be noted that a person should be aware not to perform them so quickly to an extent that they become invalid. Feeling at rest in every pillar of the prayer is a must.

The legal ruling concerning lying down after performing them

‘Aishah (May Allah be pleased with her) reported:

The Prophet (ﷺ) used to offer eleven rak’ahs of optional Salat (prayers) in the latter part of night. When it was about dawn, he would offer two short rak’ahs and then would lie down on his right side till the Mu’adhdhin (one who calls for prayer) would come to inform him that the congregation had gathered (for prayer). (Al-Bukhari and Muslim)

Scholars hold different opinions regarding lying down after performing the two supererogatory rak’ahs of al-Fajr. There are three opinions as follows: obligatory, recommended and allowed.

Scholars who adopt this opinion use the following hadith to support it. Abu Hurairah narrated that:

Allah’s Messenger (S) said: “When one of you prays the two (supererogatory) Rak’ahs of Fajr then let him lay down on his right (side).” (Abu Dawud and Al-Tirmidhi)

To explain how they deduced this legal ruling, they say that this hadith contains the form of imperative which denote obligation in Arabic.

Discussing this opinion, scholars of hadith consider this narration, which contains the form of imperative, as shadh (anomalous). Secondly, supposing it is authentic, the form of imperative here should not be understood to mean obligation because there are other proofs that clearly denote that lying down is not obligatory.

The following hadith denotes that lying down is not obligatory. Narrated `A’isha:

After offering the two (supererogatory) rak`ahs,  the Prophet (p.b.u.h) used to talk to me, if I happen to be awake; otherwise he would lie down. (Al-Bukhari and Muslim)

Anas (May Allah be pleased with him) reported:

The Messenger of Allah (ﷺ) said: “The supplication made between the Adhan and the Iqamah is never rejected.” (Abu Dawud and Al-Tirmidhi)

If a person arrives at the masjid (mosque) and finds out that Muslims are performing the obligatory congregational prayer of al-Fajr, he must join them.

As for the missed prayer, there are two opinions concerning the time when a person can make it up.

The person should wait till about 10 or 15 minutes after sunrise to be able to make up the sunnah (supererogatory) of al-Fajr.

Abu Huraira is reported to have said that the Messenger of Allah (ﷺ) prohibited to observe prayer after the ‘Asr prayer till the sun is set, and after the dawn till the sun rises. (Muslim)

2. After performing the obligatory prayer

Scholars who support this opinion say that making up the missed prayers is an exception.

Qatada narrated on the authority of Anas b. Malik that the Messenger of Allah (ﷺ) said:

He who forgets the prayer, or he slept (and it was omitted), its expiation is (only) that he should observe it when he remembers it. (Muslim)

Um Salamah (Allah be pleased with her) said, “I sent a slave-girl to Prophet Muhammad (PBUH) asking her to stand by his side and say to him that Umm Salama says:

Messenger of Allah, I heard you prohibiting these two rak’ahs, whereas I saw you observing them; and if he (the Holy Prophet) points with his hand (to wait), then do wait.

The slave-girl did like that. He (the Holy Prophet) pointed out with his hand and she got aside and waited, and when he had finished (the prayer) he said:

O Daughter of Abu Umayya! You have asked about the two rak’ahs after the ‘Asr prayer. Some people of ‘Abd al-Qais came to me for embracing Islam and hindered me from observing the two rak’ahs which come after the noon prayer. So those are the two I have been praying. (Al-Bukhari and Muslim)