The Virtues of Hajj And `Umrah

The Arabic word ‘Hajj’ literally means to repair to, betake oneself or set off for a place. In the technical usage of the term, it means to repair to the Sacred House in Makka and perform the rites of the Pilgrimage. Allah says,

“Thus Hajj-Pilgrimage to the (Sacred) House (in Makkah) is owed to God, as an obligation upon all people who are able to attain a way to it. And as to those who disbelieve (this, know), then, (that) God is, indeed, self-sufficient, without (any need for any of His creation in) all the worlds.” (Quran 3:97)

This verse highlights the obligation of Hajj for every Muslim who meets the requirements of observing it. Observing it more than once is voluntary. 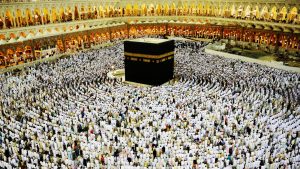 “So complete the Hajj –Pilgrimage and the `Umrah-Lesser Pilgrimage solely for (the sake of) God.”

In the Arabic language, `Umrah means a visit. It means in Islamic law to visit the Sacred House in Makka to perform the rites of the Lesser Pilgrimage. Allah says,

“So complete the Hajj –Pilgrimage and the `Umrah-Lesser Pilgrimage solely for (the sake of) God.” (Quran 2:196)

The difference between the Hajj and the `Umrah

Unlike the `Umrah, the Hajj is the fifth pillar of Islam. It differs from the `Umrah in the legal ruling, the rites and the time of performance. As for the legal ruling, the Hajj is obligatory for once in a lifetime and for every Muslim who can afford it, namely, the person has enough money and health to make it, whereas the `Umrah is non-mandatory. Secondly, there are a few differences concerning the actions of both rites. The most important one is standing on ‘Arafat which the Hajj cannot be complete without observing this pillar on the 9th day of Dhul-Hijjah, the last month of the lunar year. Thirdly, the hajj can only be performed at a particular time of the year on specific days of Dhul-Hijjah, whereas the `Umrah may be performed at any time of the year.

The virtues of the Hajj and the `Umrah

1. Hajj is one of the best acts of worship. To be accepted, it must be observed sincerely and with the intention of seeking only Allah’s pleasure. Moreover, it must be performed properly based on the rulings derived from the Quran and the authentic Sunnah of the Prophet (peace and blessings of Allah be upon him)

2. There is a great reward for the observance of this great pillar. Observing `Umrah also expiates sins. However, what is meant by sins in the following hadith is minor sins. As for major sins, they require sincere repentance. In addition, the sins that are related to people’s rights require a person to give those people their rights back. That’s why sincere repentance and to free oneself from acts of injustice are highly recommended before setting off for Makka.

Abu Hurairah (RAA) narrated that the Messenger of Allah said, “The performance of `Umrah is an expiation for all the sins committed (between this `Umrah and the previous one), and the reward for Hajj Mabrur (the one accepted by Allah or the one which was performed without doing any wrong) is nothing save Paradise.” (Al-Bukhari and Muslim)

3. If the pilgrim succeeds in staying away from sinning, mischief or doing any wrong during Hajj, he or she will have his or her sins forgiven. Millions of Muslims gather together in one place where they are tested to show how well they can treat each other. This sheds light on the ethical aspect of hajj which promotes good manners, peace, tolerance and cooperation among Muslims.

Abu Hurairah (May Allah be pleased with him) reported: The Messenger of Allah (ﷺ) said, “Whoever performs Hajj (pilgrimage) and does not have sexual relations (with his wife), nor commits sin, nor disputes unjustly (during Hajj), then he returns from Hajj as pure and free from sins as on the day on which his mother gave birth to him.” (Al-Bukhari)

4. Prophet Muhammad (peace and blessings of Allah be upon him) encouraged Muslims to perform hajj and `Umrah because of the great benefits brought to the pilgrim in this life and Afterlife. In addition to the forgiveness of sins, the hajj and `Umrah are also legal means of alleviating poverty.

Ibn ‘abbas said: “The Messenger of Allah said: ‘Perform Hajj and ‘Umrah consecutively; for they remove poverty and sin as the bellows removes impurity from iron.” (It is a hasan (good) hadith related by Al-Nasa’i)

5. For Muslim women, Hajj is a substitute for Jihad as it is not obligatory for them. In fact, this shows the facilitation and moderation of Islamic teachings.

‘Aishah (May Allah be pleased with her) reported:

I said: “O Messenger of Allah! We consider Jihad as the best deed, should we not then go for Jihad?” The Messenger of Allah (ﷺ) said, “The best Jihad for you women is Hajj Mabrur (i.e., one accepted by Allah).” (Al-Bukhari)

6. It is known that the blessed month of Ramadan is one of the best months. This may be the reason why observing `Umrah in it has a greater reward.

Ibn ‘Abbas (May Allah be pleased with him and his father) reported:

The Prophet (ﷺ) said, “(The performance of) `Umrah during Ramadan is equivalent to Hajj (i.e. in reward).” (Al-Bukhari and Muslim)

Finally, Hajj and `Umrah have a lot of other benefits and virtues because there are other acts of worship included while performing them. These include performing prayer, fasting, giving to charity, remembrance of Allah, making du’aa (supplication), etc. There are also social benefits as these kinds of worship help solve problems like racism. In fact, a lot of differences disappear there as all people dress the same and observe a lot of acts of worship collectively and at the same time.