Trick or Treat? The Origin of Halloween 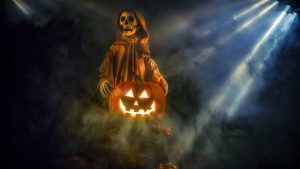 Trick or Treat? The Origin of Halloween

Subhan-Allah, it’s Autumn! Every time I look around and marvel at Allah’s creation of beautiful seasons, each unique and alternating with rhythm and purpose, I am humbled and grateful towards our Creator, the artist who created the Universe and everything in it with a single infallible stroke of HIS omnipotence.

Every nation is rich in heritage, culture, history and prides in its traditions, customs and celebrations that have been passed down by their forefathers. One such celebration very popular in the western world is Halloween.

Autumn marking the beautiful transition from summer to winter approaches us as we enter October, and we are hit “Boom” or should I say “Boo” with reminders of Halloween from every direction. From famous retail chains to regular grocery stores, all have their aisles and prominent portions of their stores conspicuously lined and decked with Halloween stuff ranging from spooky costumes, masks of witches, ghosts, werewolves, skulls, skeletons to pumpkins, jack -o-lanterns, decorations, special edition Halloween candies, treats etc. Even the media outlets like newspapers advertise various Halloween adventures and entertaining events like Spooky houses, haunted forests etc. targeting different age groups where you pay bucks to get scared and feel goosebumps and shivers run down your spine. The internet does not fail either to remind us and takes it a step further with pictures of animals in costumes as if humans parading in fancy or spooky costumes were not enough.

For majority of the parents in the west, Halloween is envisaged as images of young innocent children ringing doorbells, dressed up in eye-catching pretentious scary costumes, impersonating their favorite movie character, their faces and eyes gleaming with excitement and joy, holding their loot of candies and with unanimous cries of “Trick or Treat” comes to mind. Nevertheless, is there more to Halloween than just plain innocent fun?

Of course, it is no hidden fact that Halloween marketing is so extensive that Halloween accounts for the second most commercially successful holiday after Christmas in the United States. The Halloween retail spending by U.S. consumers is estimated at $9 billion in 2018. They spend almost $3.2 billion on Halloween Costumes annually and more than $2.5 billion on other trappings like the decoration, crafts etc. Of all the candy that is sold annually, one fourth is sold just during the Halloween time averaging sales of $2.7 billion annually.

Imagine if we could donate this money to feed the poor and less fortunate who cannot afford even one proper meal a day. We are so mechanically and mindlessly caught up in this yearly ritual that we do not stop even for a moment to ask ourselves, “What is Halloween really about?” What is the history behind this celebration? Should we, as adults continue to dodge the responsibility from educating ourselves and our children on this subject and just blindly and heedlessly follow what the others in our society are doing just to “fit in”?

NO!! As a Muslim and furthermore as a parent it becomes our duty to understand it in the light of the Shariah. We have to teach them that respect and reverence for other customs, traditions and holidays in the society in which we live is not bordered on practicing their beliefs especially if associated with pagan roots.

The origin of Halloween

Halloween originated 2000 years ago from the ancient Celtic pagans. They used to live in Ireland, Scotland, Wales, Isle of Man, Cornwall and Britanny, also known as the six Celtic nations. Halloween symbolized the beginning of the ancient Celtic New Year. The Celts observed only two seasons in the year: summer and winter.

Samhain (Scottish Gaelic spelling: Samhuinn) which literally means “summer’s end” was an important festival celebrated on November Eve, the night of October 31st. It meant the beginning of the Celtic year, the close of the harvest and beginning of the season of cold and darkness.

Some believe that the festival was held to honor the “Lord of Death”. The Druids believed that on the eve of this Festival Samhain, lord of the death called together the wicked spirits that within the past twelve months had been condemned to inhabit the bodies of animals. Sacrifices and gifts were offered to the dead spirits because it was a pagan belief that on this one night the dead spirits visit their earthly dwellings. If they are satisfied with the offerings they leave you in peace or else cast an evil spell on you.

After the Romans conquered Britain and with the rise of Christianity “Samhain” was changed to ‘Hallowmas’, or ‘All Saints’ Day’ or ‘All Souls Day’ and is observed on November 1st to honor all Saints in heaven. It began on the evening of October 31, which was called All Hallows Eve.

What remains of Halloween today is a hybrid and remnants of these two celebrations. Its originality over the years gradually was distorted with new additions and alterations made by people with their vested interests like the corporate world to mint money at the consumer’s expense.

What should a Muslim do?

Allah says in the Quran (Al-Furqan, 25:72): “And those who do not witness falsehood, and if they pass by some evil play or evil talk, they pass by it with dignity”.

The above Ayah explains that true servants of Allah should try and refrain from such gatherings and if they happen to be there, should leave the scene right away with dignity coming out clean and pure.

However, as a Muslim who strives to acquire knowledge, it is important that we learn about any event before we take part in its celebration. Celebrations that may seem completely innocent on the outside, but with deep roots and elements of pagan beliefs, rituals and devil worship should be avoided.

I pray for Allah’s guidance and apologize if my article or view offends anyone; its sole purpose was to highlight the origin of Halloween celebration and to open minds. Allah knows Best!