Until You Are Allowed to Leave the Cocoon! 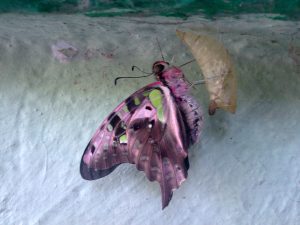 No pain, no gain!

You may have seen a cocoon before! For those who haven’t, a cocoon is a silky covering that young moths and other insects make to protect themselves from other creatures while they are growing. Given this, let us go through the following short story whose characters are a man and a moth who is still inside its cocoon.

Once upon a time, a man found a cocoon with a moth inside. One of the cocoon’s sides started to open as the moth started to find its way out to start a new phase of her lifecycle as a beautiful butterfly with amazingly attractive symmetric designs and colors all over its two wings as well as its graceful body.

Looking forward to seeing it coming out, the man spent hours as watching the little butterfly trying to get out of the cocoon as it was putting all its effort into the task. The butterfly was trying to get its weak body through that little hole in the cocoon. Several hours elapsed while it was doing its best to get the job done but suddenly it stopped and became motionless.

Feeling sympathy for the butterfly, the man wanted to give it a helping hand as to assist it to get out of the cocoon. He brought a pair of scissors and cut the remaining part of the cocoon that had enveloped and embraced the butterfly for quite some time.

Consequently, the butterfly was able to get out of the cocoon easily, but with a swollen body as well as feeble and weak wings.

The man kept observing the butterfly for days while anticipating it to open and spread its wings at any moment as a sign of being ready to have its first flight.

Nevertheless, the butterfly spent the remaining time of its life crawling with its swollen body that is full of liquids and the frail and broken wings as it could not fly at all; not even for once or a second!

Out of his kindness and haste, the man did not realize that the cocoon was squeezing the extra and/or excessive liquids in the butterfly’s body – a matter which is designed by Allah’s Perfect Wisdom and All-Encompassing Knowledge – and that the effort the butterfly puts in its endeavor to get out of the cocoon strengthens its muscles and makes it capable of flying after it is released from the cocoon.

Sometimes, tribulations, trials, and pain are necessary for you and your life as through them you may learn several lessons and countless pieces of wisdom and your faith in Allah, the Creator of all, increases and your character gets strengthened and enhanced more and more.

Should we live our lives without any trials or hardships, we would not have been strong enough to survive! The wisdom behind this is that we need to strive in this present life and that struggle is what makes us strong and able.

If Allah has destined that man would lead his life easily and without any sort of difficulties, he would not have the capability to strive or confront hardships and would not have been able to do good either to himself or to his community and he would have been impatient.

Mus`ab ibn Sa`d narrated from his father that a man said: “‘O Messenger of Allah (Peace and blessings be upon him)! Which of the people is tried most severely?’ He [the Prophet] said: ‘The Prophets, then those nearest to them, then those nearest to them. A man is tried according to his religion; if he is firm in his religion, then his trials are more severe, and if he is frail in his religion, then he is tried according to the strength of his religion. The servant shall continue to be tried until he is left walking the earth without any sins.’” (Jami` Al-Tirmidhi, Vol. 4, Book 10, Hadith 2398)

Therefore, the bottom line here is that Allah the Almighty tests you in order for you to win His pleasure; and, you feel pain, in order to learn. No pain, no gain!

Ibn `Atta’ Al-Sakandari says in his Words of Wisdom, “He who does not come to God because of the sweetness of His Generosity, will come pulled in the chains of trials and tests.”

“And We will surely test you with something of fear and hunger and a loss of wealth and lives and fruits, but give good tidings to the patient. Who, when disaster strikes them, say, “Indeed we belong to Allah, and indeed to Him, we will return.” Those are the ones upon whom are blessings from their Lord and mercy. And it is those who are the [rightly] guided.” (Al-Baqarah 2: 155-157)

Put your full trust and hopes in Allah the Almighty and be patient until He permits you to get out of the cocoon.

Dr. Ali Al-Halawani is Assistant Professor of Linguistics and Translation, Kulliyyah of Languages and Management (KLM), International Islamic University Malaysia (IIUM), Kuala Lumpur, Malaysia. He was Assistant Professor and worked for a number of international universities in Malaysia and Egypt such as Al-Madinah International University, Shah Alam, Malaysia (Mediu) and Misr University for Science & Technology (MUST), Egypt; Former Editor-in-Chief of the Electronic Da`wah Committee (EDC), Kuwait; Former Deputy Chief Editor and Managing Editor of the Living Shari`ah Department, www.islamOnline.net; Member of the International Union of Muslim Scholars (IUMS); and member of the World Association of Arab Translators & Linguists (Wata). He is a published writer, translator, and researcher. You can reach him at [email protected]