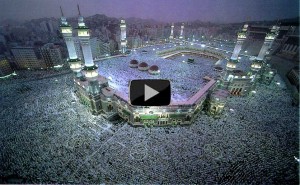 Watch the rituals of Hajj live

Makkah (Mecca) is a city that lies in the Kingdom of Saudi Arabia. Muslims consider it a holy city as it holds the greatest and most sanctified Masjid (mosque) as well as the Kabah, a sanctified building towards which Muslims direct themselves while offering their prayers. Makkah represents a religious symbol for Muslims.

Nowadays, Makkah witnesses the biggest Muslim congregation throughout the year, namely the occasion of Hajj. Muslims head from everywhere for the city of Makkah to perform this worship which is an obligation in Islam. They arrive at the Holy Masjid of Makkah, circumambulate around Kabah and do specific rituals of Hajj. Hajj is an obligation in Islam upon those who can afford it financially and bodily. Almighty Allah says,

And Hajj to the House (Ka`bah) is a duty that mankind owes to Allah, those who can afford the expenses; and whoever disbelieves [i.e. denies], then Allah stands not in need of any of the mankind and all that exists. (Aal `Imran 3:97)

The Prophet Muhammad (peace be upon him) said, “Islam is based on five: testifying (the fact) that there is no god but Allah, that Muhammad is His bondsman and messenger, and the establishment of prayer, payment of Zakah, Pilgrimage to the House (Ka`bah) and the fast of Ramadan. (Muslim)

Below is a live streaming from Makkah where Muslims perform the rituals of this special event and worship in Islam.

If you have any question regarding this event or need to know more about the rituals of Islam, you are welcome to our private chat on Chatonfaith.com