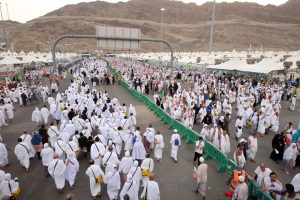 Hajj has a message of belonging to Islam.

We talked in a previous article about four messages that one catches from visiting the sacred House of Allah, the Kabah, for Hajj. We are going to continue this interesting topic as we find it is useful for the pilgrims to take these messages into consideration, having returned from Hajj.

Fifth: Message of Belonging to Islam

When one puts the first foot in Makkah, one is get amazed not only by the enormous numbers of people but also by the diversity of their colors, genders, ages and languages.

One sees the Arab and the non-Arab, the males and the females, the old and the young, and people with different colors, nationalities, cultures, histories, jobs and life conditions.

The common factor between all of those is one thing, namely belonging to Islam. If you want to describe all of them with one word, you can simply say “Muslims”, a designation given to them long ago by the Prophet Ibrahim (Abraham, peace be upon him). The Quran says:

And strive for Allah with the striving due to Him. He has chosen you and has not placed upon you in the religion any difficulty. [It is] the religion of your father, Abraham. Allah named you “Muslims”. (Al-Hajj 22:78)

They follow this religion because it knows no discrimination on any basis. The only thing with which a human being excels another human being according to Islam is attaining taqwa, a word that means piousness, fear of Allah and obedience to Him.

In his Hajj, the Prophet Muhammad (peace be upon him) stood on the Arafat mountain speaking to the masses of people who offered Hajj with him, in his Final Sermon, “No Arab is superior to a non-Arab and no white man is superior to a black man, except in terms of taqwa.”

Affiliation to Islam means to submit to Allah as your God, Muhammad as your Messenger and Islam as your way of life.

Have you got the message!!

When commencing Hajj, a pilgrim enters in a state of Ihram (ritual state for Hajj or Umrah). Every male pilgrim wears a specific dress consisting of two white garments that have no pockets or decoration. It is so simple and reminds of the hereafter.

In Prayer, you stand side by side with someone who may be less than you in rank or position, but still he may wear expensive clothes, watch and fragrant perfume, and with his nails and beard trimmed. Yet in Hajj, once you enter in the state of Ihram, you have to wear only two white garments wrapped around your body, and you are forbidden to wear any sewn clothes, apply perfume or trim your nails or hair. All pilgrims looks the same, with same dress and look, does not this teach you humbleness?

Abu Hurairah narrated that the Messenger of Allah (peace be upon him) said: “Wealth does not decrease because of charity, and Allah increases His slave in honor when he forgives others. And no one humbles himself before Allah but Allah will raise him (in status).” (Muslim)

Have you got the message!!

Seventh: The Message of Forbearance

The great masses of people bring unbearable crowd, annoyance and harassment as well as the calls of help from others. In this atmosphere you offer you Hajj rites with utmost hope that Allah accepts your deeds, and fear that your Hajj may not be accepted. Yet, forbearance is what makes this easy for you. You are commanded to keep patient and endure the difficulties and annoyance from others, and do not react to others harassment except in good way and with toleration. Actually, this is another message of Hajj.

There are three kinds of forbearance: forbearance on performing worship, forbearance on keeping away from sins and forbearance on the decrees of fate. In Hajj, you are experienced to a lot of hardship and fatigue and stay a long time in waiting and you are commanded to endure and tolerate. Almighty Allah says:

O you who have believed, persevere and endure and remain stationed and fear Allah that you may be successful. (Aal `Imran 3:200)

Indeed, the patient will be given their reward without account. (Al-Zumar 39:10)

The Prophet (peace be upon him) said, “Whoever performs Hajj and does not commit any obscenity or commit any evil will go back (free of) sin as on the day his mother bore him.” (Al-Bukhari and Muslim)

Have you got the Message!!