What Are the Rulings of the Latecomer Recitation in Prayer?

The Rulings of the Latecomer Recitation in Prayer

If a person catches up with the second rak`ah behind the Imam, should he recite a short Surah in the third rak`ah or not?

In the name of Allah, We praise Him, seek His help and ask for His forgiveness. Whoever Allah guides none can misguide, and whoever He allows to fall astray, none can guide them aright. 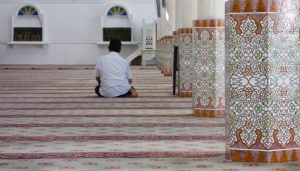 Abu Hurairah (may Allah be pleased with him) narrated: I heard the Messenger of Allah (peace be upon him) saying, “When the Iqamah are pronounced, do not come to it running, you should walk calmly with tranquility to join the congregation. Then join in what you catch for and complete what you miss.” (Al-Bukhari and Muslim)

If it is a four-rak`ah prayer and he catches up with three or two rak`ahs with the Imam, then he should recite Al-Fatihah only in the one or two rak`ahs that he makes up, because that is the latter part of the prayer for him, so he does not have to recite another surah as well as Al-Fatihah. This is the correct scholarly view.

What Is the Ruling on Prayer of One Who Falls Asleep in Sujud?

Why Cannot Women Call Out Loud Adhan and Iqamah?

Can I Make Up Missed Fajr Prayer in Congregation After Sunrise?

What Is the Amount of Impurities (Najasah) Which Is Pardoned?