What Do You Know About Makkah? 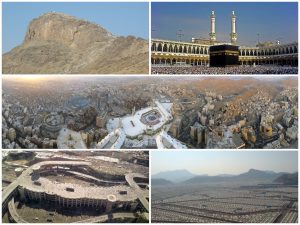 History informs us about what happened during specific points in the past as well as events that have taken place over time and gives us information related to this. Such information may be true or false, and every Muslim is obliged to seek the truth and confirm any information he hears so that he may ascertain what is correct from what is fabricated. Moreover, every Muslim should refer to reliable sources in order to obtain definite, authentic and verifiable information.

Makkah is the Sacred City as well as the holiest and the absolutely most honorable place on earth. The most truthful sources from which one can take the news about its history are the Noble Qur’an and the authentic prophetic narrations in this regard, and from these, we can ascertain its ancient history as well as how it was prior the message and prophethood of Muhammad.

After the advent of Islam, Muslim scholars and historians have endeavored to record chronicles of Makkah in general history books as well as books concerned with the biographies of the Muslim scholars who lived in it. Some scholars authored books that dealt primarily with its history and the areas surrounding it, one of the most famous beings “Chronicles of Makkah and its Ancient Monuments” authored by Abu Al-Waleed Al-Azraqi from the third century AH. Another book was “Chronicles of Makkah in Ancient and Contemporary Times” authored by Al-Fakihi who also lived during the third century AH, and his book was larger than that written by Al-Azraqi but the initial parts of his book were lost over time.

Thereafter, chronicling the affairs and events of Makkah ceased for a period of almost four centuries. It was thereafter resumed and one of the scholars who is considered to be the most prolific author regarding it and its history was Imam Taqiyyud-Deen Al-Fasi Al-Makki (775 AH – 832 AH). In his book entitled “The Therapy for those who Harbour Affection for the History of the Sacred City”, Imam Taqiyyud-Deen expressed his amazement at the fact that chronicling the history of Makkah had halted after Imams Al-Azraqi and Al-Fakihi.

Thereafter, many scholars and schools of history arose which contributed to the writing of the history and chronicles of Makkah such as, Aal Fahd and Aal Al-Tabari, and this has continued ever since, to include the contemporary.

The establishment of Makkah

Ibrahim (may Allah exalt his mention) walked for a while and then stood upon a small hill, raised his hands in supplication, and said, as Allah informs us saying (what means):

“Our Lord! I have settled some of my descendants in an uncultivated valley near Your Sacred House, our Lord, that they may establish prayer. So make hearts among the people incline toward them and provide for them from the fruits that they might be grateful.” [Ibrahim 14:37]

Allah blessed Hajar and her son with the well of Zamzam, and then people came from all directions and resided in Makkah. The first tribe to reside there was the tribe of Jurhum among whom Isma`il (may Allah exalt his mention) grew up and from whom he married.

Ibrahim (may Allah exalt his mention) came many times to Makkah to check upon their condition, and later Allah commanded him to build the Ka`bah; Allah says (what means):

“And [mention] when Ibrahim (Abraham) was raising the foundations of the House and [with him] Isma`il (Ishmael), [saying]: ‘Our Lord! Accept [this] from us. Indeed, You are the Hearing, the Knowing.’” [Al-Baqarah 2:127]

“And [O Muhammad], when We designated for Ibrahim (Abraham) the site of the House, [saying] “Do not associate anything with Me and purify My House for those who perform Tawaaf (circumambulation of the Ka’bah) and those who stand [in prayer] and those who bow and prostrate.” [Al-Hajj 22:26]

Ibn Kathir said commenting upon this verse in his famous book of history entitled “The Beginning and the End” in Volume 1, page 135: “There is no authentic report from the infallible (i.e. Prophet Muhammad ) informing us that the House (the Ka`bah) was built before Ibrahim (may Allah exalt his mention) and whoever states that, relying upon this verse (for evidence of that), has no basis for such a claim because what is meant by the verse is that he was simply being informed of where the House was to be built.” In Volume 2 page 227 of the same book, he said: “The verses of the Qur’an clearly indicate that Ibrahim was the first person to build it.”

Abu Dharr (may Allah be pleased with him) narrated: “I asked the messenger of Allah: `O Messenger of Allah! Which mosque was the first built on earth? He replied: “The Sacred Mosque (in Makkah)” “I then asked: ‘Which mosque was built next?` He said: “The Aqsaa mosque (in Jerusalem).” “Thereupon, I asked: `What was the period between the building of the two mosques?’ He replied: “Forty years.” [Al-Bukhari]

These reports clearly highlight the virtue of Prophet Ibrahim (may Allah exalt his mention) and confirm that he was the one who built the two mosques and that the period between the two was forty years.

Therefore, it becomes evident that the first thing to be established in Makkah was the Sacred Mosque (i.e. the Ka`bah), and that the first water to gush forth from it was Zamzam.

Thereafter, the offspring of Isma`il (may Allah exalt his mention) multiplied in the area of Hijaz (the province in which Makkah lies) and its surroundings, and their families succeeded each other in caring for the Sacred House and maintaining it for a long period of time, until the tribe of Khuza`ah took over this responsibility. People remained upon the monotheism with which Prophet Ibrahim (may Allah exalt his mention) came until the time when ‘Amr bin Lahy Al-Khuza`i introduced idol worshipping in the Ka`bah.

Due to numerous wars and tribal struggles, the well of Zamzam was buried and people could no longer find it. Qusay bin Kilab, a great-grandfather of the Prophet Muhammad forcefully took over the custody of caring for the Sacred House and maintaining it from the tribe of Khuza`ah, as it had abused its authority. Qusay gathered the scattered families of the Quraysh tribe, relocated them in Makkah, and restored the sanctity of Makkah, which had been lost due to Khuza`ah’s misuse of authority and because some of the Quraysh tribe had been placed in the surrounding areas of Makkah in order to protect it.

This marked the beginning of an authority that glorified Makkah and which freely offered all types of services to its visitors, such as food, water and the cleaning and maintaining of the Ka`bah.

After `Abdul-Muttalib saw a dream in which he saw the exact spot of the buried well of Zamzam, he had the area dug up and restored the well. Thus, the well of Zamzam once again became the source of water to the pilgrims and visitors, as well as to the residents of Makkah.

After this, a grave event took place during the time of `Abdul-Muttalib when Abrahah the Ethiopian headed towards Makkah riding a huge elephant in order to demolish the Ka`bah. This is why that year came to be known as “The Year of the Elephant”, during which the Prophet was born.

A city with such a magnificent history is worthy of having such an exalted status and should, therefore, be glorified and honored. It deserves to occupy a special place in the hearts of its residents, as well as the Muslims in general.