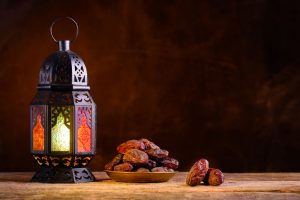 Fasting enables the believer to guard against his archenemy.

Fasting, Siyam, has two meanings. Generally, siyam or sawm is derived from the root word sama, which means to restrain from normal things such as eating, drinking, and talking.

If an individual refrains from these things, he is considered saim, an observer of the fast.

The phrase “to remain silent” is the interpretation of the Arabic word, “sawm.”

In Islamic law, Shari`ah, the word “sawm” implies to a specific act. And that is, “to worship Allah by abstaining, with intention to please Him, from food, drink, and sexual intercourse or an intentional and lustful discharge of semen from the period between the break of dawn until sundown”.

Although the definition indicates restraining the stomach and private parts, the tongue, eyes, ears and other limbs should equally be restrained if the fasting person wants to gain the total rewards of fasting.

This is why the Messenger of Allah (peace be upon him) has been reported as saying in a hadith by Abu Hurairah: “He who does not desist from obscene language and acting obscenely (during the period of fasting), Allah has no need that he be hungry or thirsty.” (Al-Bukhari and Muslim)

In another hadith by Abu Hurairah (may Allah be pleased with him), the Prophet (peace be upon him) said: “Fasting is not only to restrain from food and drink, fasting is to refrain from obscene (acts). If someone verbally abuses you or acts ignorantly towards you, say (to them) ‘I am fasting; I am fasting.’” (Ibn Khuzaimah)

Indeed, these two reports imply that fasting will not be completed until one observes three elements:

1- Restraining the private parts and the stomach from food and drink.

2- Restraining the Jawarih, the other body parts, which may render the fast worthless despite the main factors of hunger and thirst.

The tongue, for instance, must avoid backbiting, slander, and lies; the eyes should avoid looking into things considered by the Lawgiver as unlawful; and the ears must stop from listening to conversations, words, songs, and lyrics that spoil the spirit of fasting.

3- Restraining of the heart and mind from indulging themselves in other things besides dhikr Allah (remembrance of Allah).

Islam is built on five pillars. Each represents a unique utility, an institution, if you will, through which the believer builds his relationship with the Creator and the creation.

Of all the pillars of Islam, none is more special than siyam, fasting. While there may be an appearance of riya‘, eye service, or show, in all other pillars – Salah, Zakah, Hajj, and even the kalimah – there is no such possibility in fasting.

The only One who knows that you are really abstaining is Allah, the Almighty. It is easy to pretend to be fasting; while in hiding, you may eat or drink. Thus, fasting is considered a special worship, as Hadith reports from the Messenger of Allah (peace be upon him)  have detailed.

It has been reported by the way of Abu Hurairah (may Allah be pleased with him) that the Prophet (peace be upon him)  reported that Allah (Glory be to Him) said in a Hadith Qudsi:

“All services of the son of Adam are for him except fasting. It is for Me, and I will reward him for it. Fasting is a shield. On the day you fast, do not use obscenity, nor yell at others, nor act ignorantly towards them. However, if anyone abuses you verbally or attempts to draw you to fight with him, say ‘I am fasting’ two times.

The Prophet (peace be upon him) then states: I swore by the One (Allah) in Whose Hand is the soul of Muhammad, the breath of the faster is sweeter to Allah on the Day of Judgment than the scent of musk. The faster experiences enjoyment twice: he is pleased when he breaks his fast, and he is pleased when he meets his Maker” (Muslim)

Among the points this incisive hadith revealed is that fasting is Allah’s. Certainly, there is only one reason why a believer will put himself or herself through this trying physical exercise that – to seek the pleasure of Allah.

The fast is the single most important device to test the Iman, faith, of the believer and the depth of his sincerity and commitment to the concept of Tawhid, the Oneness of Allah.

The hadith also states that fasting is a shield, an armor protecting the believer from sinful acts (ma`asi). Do you not know that nourishment is the first culprit in the propagation of sins? For when you eat, the blood flow increases considerably, and the energy level increases, making it easier for Satan to use your own energy level to tempt you to commit sins. In another hadith, the Prophet states:

“Satan runs in the circulatory system of the son of Adam in the same way blood circulates in our system; so tighten his passages with hunger.” (Al-Bukhari and Muslim)

Now you see why fasting becomes a shield. Fasting enables the believer to guard against his archenemy. It also helps him against human evil by putting the patience and perseverance gained from fasting into use with forbearance and forgiveness of the attacker – that is, of course, when the safety of one’s life is not involved. Otherwise, in this case, Al-Quran allows the believer to repel evil without transgression.

Source: Taken from the author’s Essentials of Ramadan the Fasting Month.