What Is the Ruling of Friday Prayer for a Traveler? 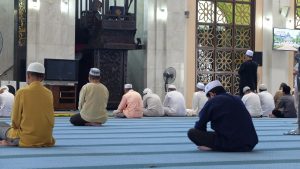 Friday prayer is not obligatory on the traveler. This is the opinion of the majority of scholars.

Could we leave Jumu`ah (Friday prayer) when we are traveling?

Friday prayer is not obligatory on the traveler. This is the opinion of the majority of scholars, including the followers of the four schools of Abu Hanifah, Malik, Ash-Shafa`i and Ahmad.

Ibn Taymiyah (may Alah have mercy on him) said in Al-Fatawa (24/178): “The correct opinion, without a doubt, is that this (Jumu`ah and `Eid prayers) are not obligatory for the traveler. The Messenger of Allah (peace be upon him) used to travel frequently: he performed `Umrah three times, besides the `Umrah he performed along with Hajj (pilgrimage). He performed his Farewell Pilgrimage accompanied by thousands upon thousands of people, and he went on more than twenty military campaigns, but there are no reports at all that say he prayed Jumu’ah or `Eid prayers when traveling; he just prayed two rak`ahs [i.e., shortened prayers] as on all the other days.

There are also no reports that say he preached a khutbah on a Friday when he was traveling, neither standing on his own two feet or from atop his camel, as he used to do on `Eid, or from a minbar, as he used to do on Fridays. He occasionally used to deliver an address to the people when he was traveling, and this was narrated by them… but no-one reported that he delivered a khutbah to them before prayer on a Friday whilst traveling, and no-one reported that he recited Qur’an aloud on a Friday (i.e., during Noon Prayer, on a journey).

Of course, if he had done something out of the ordinary and recited aloud or delivered a khutbah, they would have reported it. On the Day of `Arafah, he delivered a khutbah, then he came down and led them in a two-rak`ah prayer, but no one reported that he recited aloud in that prayer. That khutbah was not for Jumu`ah – because if it had been for Jumu`ah, he would have done the same (delivered a khutbah) on every other Friday (when he was traveling); that khutbah was given because it was part of the rituals (of Hajj). Hence all the Muslim scholars said that he would have given a khutbah at `Arafah even if it had not been a Friday.

From the above we know that Jumu`ah is not obligatory for the traveler, all that he has to do is to pray Zhuhr (Noon). However, if he prays Jumu`ah with the people of the place he is visiting, this is OK. It says in Ash-Sharh Al-Kabeer (2/154): “Whoever of these people – travelers, slaves and women – attends Jumu`ah, does not have to pray Dhuhr, and we know of no dispute on this point. Their exemption from having to attend Jumu`ah is to make things easy for them, but if they attend, it is OK, as is the case with the sick person. It is preferable for the traveler to attend Jumu`ah, because this is better, and is on the safe side (because some scholars think that Jumu`ah is obligatory for the traveler who is staying in a particular place, but not for the traveled who is on the road), as he comes under the general meaning of the verse (interpretation of the meaning):

O you who believe! When the call is proclaimed for the prayer on the Day of Friday (Jumu`ah prayer), come to the remembrance of Allah, and leave off business (and every other thing), that is better for you, if you did but know! (Al-Jumu`ah 62:9)

We have already stated that the majority of scholars say that generally speaking it is not obligatory.

What Is the Ruling on Prayer of One Who Falls Asleep in Sujud?

Why Cannot Women Call Out Loud Adhan and Iqamah?

Can I Make Up Missed Fajr Prayer in Congregation After Sunrise?

What Is the Amount of Impurities (Najasah) Which Is Pardoned?