What Is the Value of Words in Islam? 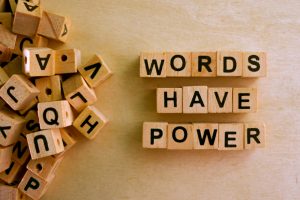 “Words are like eggs dropped from great heights; you can no more call them back than ignore the mess they leave when they fall.”  Jodi Picoult

The significance and seriousness of words cannot by any means be ignored.

Words are the means of communication, the tool of prosperity, the door of change, the way of development and the path of success.

Words are powers that one can use to either demolish or construct, to impair or repair, and to drive up or down.

Words are your choice, so make it the best. The Quran has confirmed the importance of words as it likens the good words to the good trees whose roots are firmly established and whose branches are very high, and the bad words are likened to ruined trees. God says,

See you not how Allah sets forth a parable? – A goodly word as a goodly tree, whose root is firmly fixed, and its branches (reach) to the sky (i.e. very high). Giving its fruit at all times, by the Leave of its Lord and Allah sets forth parables for mankind in order that they may remember. And the parable of an evil word is that of an evil tree uprooted from the surface of earth having no stability. (Ar-Ra`d 14:24-26)

Actually, one may not touch on any deeper and very well-coined parable that appreciates the value and significance of words as the Quran did. Some of the exegetes of the Quran illustrated that the goodly tree here refers to the palm tree whose fruits and parts are equally beneficial in addition to its firm establishment.

The verses tell us that words are fruitful and productive. They develop trunk, branches and fruits, which is only true for good words. Words involve great responsibilities, charges and even hazards.

In Islam, just a single bad word is enough to recall the wrath of God and the Hellfire, and a single good word can draw the pleasure of God and His Paradise.

Almighty Allah states that every word one utters is recorded by a watchful angel, then one will be called into account for them, if good, the reward will be good and if not, it is for God to punish or forgive,

Moreover, Almighty Allah informs us that the body parts will give their testimony before God on the Last Day about what their owner caused them to do whether good or bad, topped by the tongue, then the hands and legs. God says,

On the Day when their tongues, their hands, and their legs or feet will bear witness against them as to what they used to do. (Fussilat 24:24)

Once, Aishah (may Allah be pleased with her) said: “I said to the Prophet (peace be upon him): “Such and such thing of Safiyyah (may Allah be pleased with her) is sufficient for you.” (She means to say that Safiyyah was a woman with a short stature). He said, “You have indeed uttered a word which would pollute the sea if it were mixed in it.” (Abu Dawud and At-Tirmidhi)

To that extent, a single bad word is abhorred in Islam which pays attention to the gravity of using a word in an evil way.

A true follower of Islam should be careful about his own tongue and not to utter any word that incurs the displeasure of Allah because it may entail grave punishment. Almighty Allah has blessed us with the power of speaking while other creatures are deprived from this faculty. Thus, we are supposed to make use of it in the good way.

Abu Hurairah (may Allah be pleased with him) reported: “The Prophet (peace be upon him) said, “He who believes in Allah and the Last Day must either speak good or remain silent.” (Muslim)

Islam has attained precedence in laying down the noble values and codes of ethics. Islam cared for and balanced between the spiritual as well as the material sides which is the secret behind its excellence.

The Quran illustrates that good words are means of success in this life and the Hereafter as Almighty Allah says,

O you who have believed, fear Allah and speak words of appropriate justice. He will [then] amend for you your deeds and forgive you your sins. And whoever obeys Allah and His Messenger has certainly attained a great attainment. (Al-Ahzab 33:70-71)

However, obscenity and vulgarity in speech has nothing to do with Islam. The narrations from the Prophet (peace be upon him) explained his observance of good words.

Anas said, “The Messenger of Allah (peace be upon him) was neither coarse nor a curser nor a reviler, He used to say when he wanted to censure someone, ‘What is wrong with him? May his brow be dusty!’” (Al-Bukhari in Al-Adab Al-Mufrad)