What Is Your Objective in Ramadan? 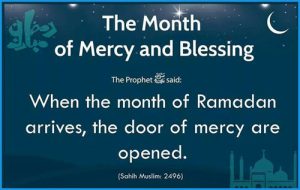 Set a goal for yourself in Ramadan which you will do your best to achieve. Let that goal be to save yourself from Hellfire and to enjoy Allah’s pleasure and salvation during that noble month.

For one’s life to be meaningful, it has to have a goal that is worked toward or striven for. If one leads all of one’s life without a goal to be achieved or an end to be reached, all of one’s life goes with the wind. This is true of all people, Muslims and non-Muslims alike. But for a Muslim, this issue has much more value, as the end-goal is to attain Allah’s pleasure and to be granted admission to Paradise in the Hereafter.

Based on this, true Muslims should have an objective for both their whole life and their individual deeds during every minute that they stay on earth.

No one can deny the fact that Allah designed and subjugated the creation in order for man to fulfill the objective he was originally created for, which can be seen in Allah’s saying in His Ever-Glorious Qur’an:

In addition, Allah Almighty gives man one chance after another to come back to Him and seek the straight path. As for Muslims, Allah gave them the month of Ramadan as a great opportunity to increase their potential good deeds and decrease their sinful ones, to help them attain Paradise in the Hereafter. Ramadan is the month where the reward for good deeds is multiplied manyfold by the grace of Allah. Thus, it is a real opportunity to overcome the obstacles of life and the malicious schemes of Satan.

Set a goal for yourself in Ramadan which you will do your best to achieve. Let that goal be to save yourself from Hellfire and to enjoy Allah’s pleasure and salvation during that noble month.

In order for you to achieve that lofty goal, you will have to stop with yourself at some important stations. These stations go as follows:

Let your objective this Ramadan be that you abstain from all that is prohibited for you by Allah. So do not cheat or lie or backbite or usurp others’ properties or gaze at what Allah has prohibited (the opposite sex). It is well-known that fasting is of three degrees:

So, what holds you back from drawing nearer to Allah and being one of those very few people who observe fasting of that third and special degree?

With Standing in the Night in Prayer

Have an objective this Ramadan to perform a minimum of eight rak`ahs in Prayer after `Isha’ and before Fajr in addition to Shaf` and Witr. Do not let anything prevent you from performing these precious rak`ahs every night in Ramadan. The Prophet (peace and blessings be upon him) is reported to have said the following:

It is highly recommended for you to observe Qiyam al-Layl (Night Prayer), for it was the practice of your righteous predecessors. Qiyam al-Layl brings you closer to your Lord, atones for your sins, drives disease from your body, and stops transgression. (Al-Bukhari and Muslim)

Be keen on finishing reading the whole Qur’an at least once during the month of Ramadan. Recite at least one of its 30 parts every day. What if you are not that good at reading the Qur’an? You should not despair or be disappointed, for there is still a chance for you to gain reward from Allah. This can be achieved by listening directly to one who has better recitation, listening to a recording, or listening to a radio station. Spending your time listening to Qur’anic recitation is also good and rewarding.

With Ties of Kinship

During Ramadan, you should be keener on being connected with your family and relatives, especially those whom the vicissitudes of life prevent continual communication with. Spend some money on getting reconnected with them. You may assign, let us say, $10 for this purpose. Imagine, this tiny sum of money could bring you together with all your relatives! It will also bring you nearer to Allah the Almighty.

Also, in so doing, try to remember the hadith in which Abu Hurairah (may Allah be pleased with him) reported that a person said this:

“Allah’s Messenger, I have relatives with whom I try to have a close relationship, but they sever (this relation). I treat them well, but they treat me ill. I am sweet to them but they are harsh towards me.” Upon this he (the Prophet) said, “If it is so as you say, then you, in fact, throw hot ashes (upon their faces) and there would always remain with you on behalf of Allah (an angel to support you) who would keep you dominant over them so long as you adhere to this (path of righteousness).” (Muslim)

Let there be a charity that you give to in Allah’s cause every day in Ramadan. The reward for charity and all other good deeds is multiplied manyfold in Ramadan. This is one of the blessings of this auspicious month. The Prophet (peace and blessings be upon him) is reported to have said, “Give out charity, for it guarantees your salvation from Hellfire” (At-Tabarani). However, what if you do not know one or it is not that easy for you to access a charity every day? You could try to gather and combine your charity every 10 days, for example, and then give it out at once.

With Dhikr (Remembrance of Allah)

Keep your tongue wet with the continuous remembrance of Allah. Remembrance of Allah is one of the best kinds of worship that is due for Allah, as well as one of the easiest kinds of worship for those for whom Allah makes it easy. The story of Hudair, one of the Prophet’s Companions who was persistent in remembering Allah during one of the great battles of early Islam, is a good example of the reward Allah Almighty has set for those who remember Him very frequently. It is reported that the Prophet (peace and blessings be upon him) forgot to give Hudair his provision for the journey, but the remembrance of Allah removed his need for food for several days, till the Angel Jibreel descended to inform the Prophet (peace and blessings be upon him) about his case. The Prophet sent another companion after Hudair carrying the necessary provision for him.

A true Muslim should be keen on using “the believer’s weapon,” du`aa’ (supplication to Allah), in every situation. This is true of every situation that occurs for a Muslim in daily life. During fasting, stick to making du`aa’, because in this state you are nearer to Allah and your supplications are more likely to be accepted. Thus, you should make du`aa’ to Allah all the time and not forget that Allah responds to the invocations of the supplicant when he or she calls on Him sincerely from the heart. Allah says in His Ever-Glorious Qur’an:

“And when My slaves ask you (O Muhammad—peace be upon him) concerning Me then (answer them) I am indeed near (to them by My knowledge). I respond to the invocations of the supplicant when he calls on Me (without any mediator or intercessor). So let them obey Me and believe in Me, so that they may be led aright.” (Al-Baqarah 2:186)

Finally, let your other objective in Ramadan be to set your head free from things that can take you to Hellfire, by doing all the aforementioned things; they are so easy for those for whom Allah makes them easy.

Dr. Ali Al-Halawani is Assistant Professor of Linguistics and Translation, Kulliyyah of Languages and Management (KLM), International Islamic University Malaysia (IIUM), Kuala Lumpur, Malaysia. He was Assistant Professor and worked for a number of international universities in Malaysia and Egypt such as Al-Madinah International Univerity, Shah Alam, Malaysia (Mediu) and Misr University for Science & Technology (MUST), Egypt; Former Editor-in-Chief of the Electronic Da`wah Committee (EDC), Kuwait; Former Deputy Chief Editor and Managing Editor of the Living Shari`ah Department, www.islamOnline.net; Member of the International Union of Muslim Scholars (IUMS); and member of the World Association of Arab Translators & Linguists (Wata). He is a published writer, translator, and researcher. You can reach him at [email protected].