What to Do After the Shahadatayn: Ghusl, Wudu, and Tayammum 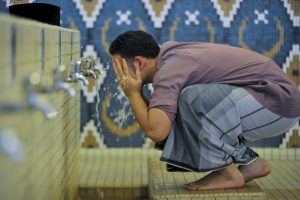 Prayer is not accepted without purification.

After pronouncing the Shahadatayn, it is from the Sunnah that a person does the following:

1. It is recommended that a person takes a complete bath (ghusl) with pure water and then perform a two-unit prayer. It is narrated that Thumamah al-Hanafi was taken captive and the Prophet (peace and blessings be upon him) would keep coming to him and say: “What do you say, O Thumamah?” He would reply, “If you decide to kill me, you would be justified because I have killed; if you let me free, you would be letting free one who shows gratitude; and if you desire wealth, we will give you what you please.” The Companions of the Prophet liked to ransom captives, and so they said, “What would we gain if we killed him?” So finally one day, the Prophet decided to set [Thumamah] free, and he thereafter accepted Islam. The Prophet sent him to the walled garden of Abu Talhah, commanding him to take a complete bath (ghusl). He performed a complete bath and prayed a two unit prayer, and the said, “Your brother’s  Prophet Islam is sincere.” (Sahih Ibn Khuzaimah)

How to Perform a Complete Bath (Ghusl)

One must intend (in his heart) that he is performing ghusl to purify himself from a state of major impurity – whether janabah, menstruation or postpartum bleeding – without uttering such intention verbally.

2- Wash the hands and then the private parts.

3- Next, perform wudu (washing specific parts of the body, in a specific sequence, to remove oneself from a state of minor impurity) as you would for the prayer. You may delay washing of the feet until the end of the ghusl.

4- You should pour [at least] three handfuls of water on your head, running the fingers through the hair so that water reaches the roots of his hair and scalp.

5- Then pour water over the rest of the body, beginning with the right side. You should make sure to wash the armpits, ears, navel, and the creases of the skin if fat, for these creases prevent water from reaching the areas of skin concealed within. You should then wash the feet if not already done while making wudu [before performing the ghusl].

Aishah reported: “When Allah’s Messenger would perform ghusl due to sexual intercourse, he would first wash his hands, then pour water with his right hand into his left, washing his private parts. After that he would perform wudu as he would for the prayer, and then take water and rub it into the roots of his hair with his fingers. [Lastly] he would wash his feet.” (Muslim)

Ghusl becomes obligatory after one of the following things:

1- Ejaculation of semen due to desire, nocturnal emission, or the like.

2- Sexual intercourse, even if it does not result in ejaculation.

One should perform wudu before the prayer for the Prophet said: “Prayer is not accepted without purification….” (Muslim)

“O you who have believed, when you rise to [perform] prayer, wash your faces and your forearms to the elbows and wipe over your heads and wash your feet to the ankles…” (Al-Ma’idah 5:6)

One should perform wudu in the following manner:

Humran the freed slave of Uthman bin Affan said: “I saw Uthman perform wudu. He poured water on his hands thrice, then he rinsed his mouth and nose, washed his face thrice, washed his right hand up to his elbow thrice, washed his left hand up to his elbow thrice, wiped over his head once, washed his right foot thrice, and then his left foot thrice. He then said, ‘I saw the Messenger of Allah perform wudu like this’, and he said: ‘Whoever performs wudu like my wudu, and then prays two Rakahs not thinking about anything else, Allah will forgive him all his previous sins.’” (Al-Bukhari)

1- One should intend that he is performing wudu to purify himself from a minor state of impurity. The proof that intention is obligatory as seen from the statement of the Prophet “All deeds are considered by their intentions, and each person will be rewarded according to what he intends…” (Al-Bukhari and Muslim)

3- One should wash his hands thrice at the beginning of the wudu.

4- One should rinse his mouth and clean his nose by sniffing water into it thrice. He should blow the water out of his nose using the left hand.

5- One should wash his face thrice. The face consists of the area starting from the hairline at the top of the forehead to the bottom of the chin or beard, vertically, and from right ear to the left, horizontally.

6- One should wash his hands from the tips of fingers to the elbow (including the elbow itself) beginning first with the right hand, then the left. If he is wearing a ring or a watch, he must remove it in order to allow the water to reach the skin underneath it.

Abdullah b. Zaid narrated: “Allah’s Messenger passed  his hands over his head starting from the front, proceeding to the back. He started from his forehead and passed them over to the top of his neck, and then passed them back to the place where he started from.” (Al-Bukhari and Muslim)

9- One should wash his feet three times from the tips of the toes up to and including the ankles. Abu Hurairah said that the Messenger of Allah saw a person who did not wash his heels, and he said to him: “Woe to the heels from the Hellfire!” (Al-Bukhari and Muslim)

10- One should wash the parts of wudu in the correct sequence. He should not contradict the sequence mentioned in the verse, for Allah mentioned the obligatory acts of wudu in a specific sequence.

11- One should not delay washing one part of the body so that the previously washed part becomes dry. It is mentioned in a Hadith that the Prophet saw a man  praying, but a portion of his foot – the size of a coin – was not  wet. Upon this, the Prophet ordered him to repeat his wudu and prayer.1 (Abu Dâwud)

One must remove anything from the parts that must be washed in the wudu which might prevent water from reaching the skin underneath it, such as nailpolish, and similar things. One remains in a state of wudu unless something invalidates it, such as urination, defecation, passing of gas, pre-seminal fluid, prostatic fluid, false menstruation (vaginal bleeding other than menses) eating camel meat, touching the private parts with one’s hand directly, and deep sleep.

If there is no water available to perform wudu or ghusl, or there is a factor present which prevents the use of water, such as illness, or the inability to use water, it is lawful to perform Tayammum.

Tayammum takes the place of water in purifying oneself from states of impurity, and it is performed as follows:

1- One should strike the ground once with his hands while his fingers are spread apart,

2- One should then wipe over his face once with his palms,

3- One should wipe both hands until his wrists.