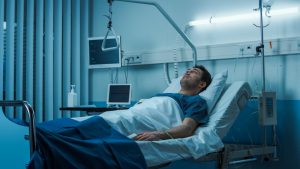 Allah allowed those who suffer from acute sickness, not to observe fasting in Ramadan.

Fasting is a religious practice found in many religions. It refers to abstention from some of the essentials of life, such as food, beverages, sexual relationship, etc. during a fixed period of time for purposes of worship and devotion.

With reference to Islam, fasting is to give up consuming any food, drink, and what is in their meaning as well as the intimate relations from the break of dawn to sunset.

In Islam, fasting is a decisive obligation in the sense that every rational adult Muslim has to observe it whether they are male or female, or free or slave. Both the Quran and Sunnah are conclusive in this regard as Almighty Allah says,

Abu Salamah ibn Abdur-Rahman narrated from his father that the Messenger of Allah (peace be upon him) said: “Allah, may He be blessed and exalted, enjoined the fast of Ramadan upon you, and I have made it Sunnah for you to spend its nights in prayer. Whoever fasts it and spends its nights in prayer out of faith and in the hope of reward, he will emerge from his sins as on the day his mother bore him.”‘ (An-Nasa’i)

It is strictly prohibited to violate fasting in Ramadan, especially in regular cases. Al-Dhahabi (a great Muslim scholar) stated in his book Al-Kabair (The major sins), “Whoever does not observe fasting in Ramadan, without being sick or having any other excuse that allows him not to fast, is worse than the adulterer or drunkard, even they doubted his Islam and thought that this was heresy.” Abu Umamah Al-Bahili said: “I heard the Messenger of Allah (peace be upon him) say: “Whilst I was sleeping, two men came to me and took me by the arm and brought me to a cragged mountain… I was taken until I saw people hanging by their hamstrings, with the sides of their mouths torn and blood pouring from their mouths.’ I said, ‘Who are these?’ He said, ‘These are people who broke their fast before it was time.’” (Al-Hakim in Al-Mustadrak)

However, the Islamic Shari`ah has excluded some cases from this obligation. As the Shari`ah gives priority to the health and life of man and considers the situations in which the performance of duties may be arduous and unbearable, it excluded certain cases from the general obligation of fasting and permitted the fasting person not to fast. In the following, we will review these cases substantiated with evidence from the Quran and Sunnah:

Allah the Almighty and Ever-Merciful allowed those who suffer from acute sickness, by which they cannot afford fasting, not to observe fasting in Ramadan. The permission is more stressed if fasting may augment the illness, affect the health or delay the recuperation. However, if the sickness is not serious, such as some cold, small injury or little pain, one is not permissible to break his fast. Almighty Allah says,

So whoever of you sights (the crescent on the first night of) the month (of Ramadan), he must observe fasting in that month, and whoever is ill or on a journey, then an equal number of other days (are due on him). Allah intends for you ease, and He does not want to make things difficult for you. (Al-Baqarah 2:185)

It was narrated from Ibn Abbas that the Messenger of Allah (peace be upon him) said: “There should be neither harming nor reciprocating harm.” (Ibn Majah)

The patient is allowed not to fast until he recovers from his ailment so that he can resume his fast. Then, he has to make up for the days he did not observe fasting on after the elapse of Ramadan. However, if his malady is lasting or incurable, he has to pay fidyah (i.e. ransom) which accounts for feeding one poor person for each day.

Imam Al-Qurtubi (the great Muslim scholar) said, “Scholars are agreed that the aged men or women who cannot afford fasting or experience extreme hardship when they fast, it is permissible for them not to observe fasting.” Also, Ibn `Abbas said regarding the verse “And upon those who are able [to fast, but with hardship] – a ransom [as substitute] of feeding a poor person [each day].” (Al-Baqarah 2:184) He said, “It has been revealed as a license for the old men and women who cannot fast. They are allowed not to fast and pay a ransom of feeding a poor for every day.” (Al-Bukhari)

This hadith shows us that the pregnant women who worry about their health or the health of their children in case they observe fasting, it is permissible for them not to fast. This is from the mercy of Allah with His servants as He does not overburden them with anything outside their capacity or involving any harm to them.

Imam An-Nawawi (a great scholar) said in his book Al-Majmu:

“Our companions said: If pregnant and breastfeeding women fear that fasting may harm them, they should break the fast and make it up later on, and they do not have to offer any ransom, as in the case of one who is sick. There is no difference of opinion on any of that. If they fear for themselves and their children, the same applies and there is no difference of opinion.”

Journey is considered as an excuse for not fasting in Ramadan. Those who cannot fast during journey can perform it later. This excuse is stated by the Quran and Sunnah in relation to the hardship found during travelling.

Therefore, a fasting person is allowed not to fast during his journey and not to make things harder for him. Not observing fasting for the traveler is a license which stands on equal footing with the command.

In other words, just as a person is asked for fasting, preserving his health and life is on the same degree of importance, even greater. The Prophet (peace be upon him) said in a hadith reported from him, “Allah loves that His licenses are executed just as he loves that his commandments are implemented.” (Ahmad)

The Quran mentioned the excuse of breaking the fast during traveling in more than one place. Almighty Allah says,

So whoever sights [the new moon of] the month, let him fast it; and whoever is ill or on a journey – then an equal number of other days. Allah intends for you ease and does not intend for you hardship. (Al-Baqarah 2:185)

Narrated Aishah: “Hamzah ibn Amr Al-Aslami asked the Prophet, “Should I fast while traveling?” The Prophet replied, “You may fast if you wish, and you may not fast if you wish.” (Al-Bukhari and Muslim)

It may occur for the fasting person a situation in which he finds himself unable to complete his fast owing to unbearable hunger or thirst, utter exhaustion, loss of mind because of faint or something alike. It is permissible for him to break their fasting in these cases.

This is included in the general rule ‘necessity makes prohibited things permissible’. The Islamic Shari`ah always seeks to preserve the mind, health and soul of the person and if anything may detrimentally affects anyone of them, it becomes excluded and excused.