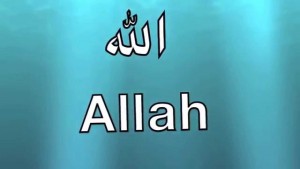 Allah is the Name of the One True God. His Name is not chosen by man and does not have a number or gender.

The submission of man to His Creator is the essence of Islam. The name “Islam” is chosen by God (Allah) and not by man. It is the same unifying Message revealed to all the Prophets and Messengers by Allah and which they spread amongst their respective nations.

In its final form, it was revealed to Prophet Muhammad (peace be upon him) as a complete Message to whole mankind.

The Lord, Allah, is the True and Only Creator that deserves to be worshiped. No worship is worthy of being given to a stone, statue, a cross, a triangle, Khomeini, Farakhan, Eliajahs, or Y, Ghandi, Krishna, Guru, Buddha, Mahatma, Emperor, Joseph Smith, Sun, Light, Fire, rivers, cows, Rama, Temples, Prophets, Messengers (Yes! Muslims do not worship Muhammad, peace be upon him), Saints, Priests, Monks, Movie Stars, Sheiks, etc.!!! All are created beings or things.

Allah is the Name of the One True God. His Name is not chosen by man and does not have a number or gender. It is known that Allah is the Name of God in Aramaic, the language of our beloved Prophet Jesus and a sister language of Arabic. The Name “Allah” has been used by all previous Prophets starting with Adam and by the last and final Prophet, Muhammad (peace be upon them all).

The Innate Nature in man recognizes what is good and bad, what is true and false. It recognizes that the Attributes of Allah must be True, Unique, and All-Perfect.

It does not feel comfortable towards any kind of degradation of His Attributes not does it qualities to the Creator. Many who became “discontent with God” did so because of the practices of the Church in medieval Europe and because of the claims of “god dwelling in a son” and the concept of the “original sin”.

However, they “escaped” into worshipping a new theory called “mother nature” as well as the “material” World. With the advancement of materialistic technology, people from different religions adopted the concept of “forgetting about God” and “let us live this life and enjoy it!”, not realizing that they have chosen the worship of the “original god” of Rome: Desire!. As a result the “enjoyment” is turning to “suffering” from AIDS.

Now we can see that all of this materialistic and secular progress produced a spiritual vacuum that led to complex social, economic, political, and psychological problems. Many of those who “fled” their “religions” are in search again. Some try to “escape” the complexity of their daily lives via various means.

Those who had the chance to examine the Quran and Islam, proceed with a complete way of life that relates man to establish a purpose for his presence on earth. This is well recognized in the Attributes of Allah and what does He require from man.

He does not want man to be enslaved to any false deity: nature, drugs, lust, money, other man, desire, or sex. He provides man with the proofs that He is the One who can redeem so that man can free himself from the slavery to any form of creation and to turn to his Creator Alone.

This Creator Has Perfect Attributes. He is the First, nothing is before Him, the Ever Living. To Him is the Final Return where everyone will be dealt with in the Most Perfect and Just way. He does not beget nor is He begotten. Those who attribute Divinity to Jesus forget or ignore the fact that Jesus was in a mother’s womb. He needed nutrition; he was born and grew up to be a man. He was trusted with the Gospel as a Message to the Children of Israel:

“For there is One God, and one mediator (i.e. a messenger) between God and men (the Children of Israel), the man Christ Jesus) (I Timothy 2:5).

A man-messenger calling his nation not to worship him: “But in vain they do worship me!” (Mathew 15:9).

A man who needs to eat, walk, sleep, rest, etc.. cannot have Divine Attributes because he is in need and God (Allah) is Self-Sufficient.

As far as Buddhism, Hinduism, Zoroastrianism, Marxism, and Capitalism, there is the devotion of worshipping created being/things in one form or another. Jews had attributed a “Nationalistic” belonging to Allah. They labeled Him “The Tribal God” for the Children of Israel.

Men and women following these “religions” were born with the natural inclination of submission to their Creator, Allah. It is their parents who had driven them into their respective traditions. However, once people are exposed to the Signs of Allah around them, or in the Qur’an or to someone who triggers their fitrah (nature), the reverting process begins and that is why we see a universal spreading of Islam.

In the West and despite that many distortions of Islam in the media, many admit that Islam is the fastest growing faith. No sense of fairness can be achieved without a genuine attempt to know the Word of Allah in the Qur’an and not on the 30-min-Evening News. This is the real challenge for those who seek the Truth. Man is created for a purpose: to live a life in accordance with Allah’s way. Why Not? Do we possess the air we breathe? Did we create ourselves or others? Or were we ourselves the Creators? We are limited and weak. So is our right to ignore our Creator where we all need Him?

Islam is the submission in worship to Allah Alone and it is the essence of all the Messages sent to all nations before us. Allah is All-Just and All-Wise. He does not intend confusion for His Creation. The religion accepted to Him is the one chosen by Him. Its essence must be One, because He is One. It is free from geographical, racist, and status oriented concepts.

Islam is a perfect and complete way of life. All these qualities of God are chosen by Allah in His Only Religion: Islam. Its details are in in the Quran, read it and come with an open heart because none can expose better than the World of Allah. The Quran was revealed to Prophet Muhammad. He did not author it. He was unlettered. Its translation is available in many languages in bookstores or in an Islamic Center close to you.

Source: Taken with modifications from: sultan.org.