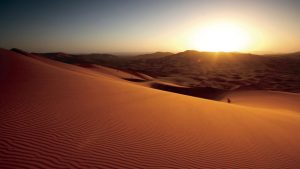 The Arab preferred death to telling a single lie, or that his people should blame him for something that may dishonor him or strip him of all dignity and grace.

Why did Allah the Almighty choose the Arabs from among the existing nations back then when He, Glory be His, sent Prophet Muhammad (peace be upon him) with His final revelation?

Why did not Him, Glory be His, choose anyone else from any other nation or civilization instead of those Arabs who were “sinking in the abyss of ignorance and backwardness?!”

At that time, the Arabs were not owners of a magnificent civilization like that of the Greeks, the Indians or the Persians. The Arabian Peninsula was completely barren and was not as beautiful as the lands of Egypt or Europe or Transoxiana. Similarly, the Arabs were neither many nor powerful as compared to any of the people of those civilizations or regions.

However, they possessed something that was not possessed by any of the other civilizations back then. That thing was quite unique to them. Maybe this can be understood from Allah’s saying in the Ever-Glorious Qur’an that means, “Allah is most knowing of where He places His message.” (Al-An`am 6: 124). Maybe this thing which they uniquely possessed was what qualified them to have a Prophet amongst themselves, to be the holders of Prophethood, those who spread the word of Allah afterwards, and those who shoulder the burden as well as responsibility of the divine message till the end of days. That “thing” was nothing but the well-established genuine ethics, morals, and characteristics that they had and which elevated them high and above all other nations and made them the best among all the nations of the world at that time. Allah the Almighty says in His Ever-Glorious Qur’an what means,

“You are the best nation produced [as an example] for mankind. You enjoin what is right and forbid what is wrong and believe in Allah.” (Aal `Imran 3: 110)

To explain this, while a Persian used to practise incest with his own mother or daughter, the Arab was ready to die for or sacrifice his own life in defence of the honor and chastity of his female neighbour, cousin, or the family of anyone who sought his protection from others!

While a Roman used to use nasty tricks, tell lies, and cheat to establish the pillars of his kingdom or rulership, the Arab preferred death to telling a single lie, or that his people should blame him for something that may dishonor him or strip him of all dignity and grace.

These were just few examples of the ethics and qualities that were unknown to other nations either in the past or even during the eras that followed the sending of Prophet Muhammad (peace be upon him) as the last messenger with the last and final divine revelation.

The history of the Arabs is replete with such examples that may attest to this and make it visible to everyone.

In the poetry of Antarah ibn Shaddad, it is quite clear how he was jealous over the honor of his neighbor and was so chaste that he could not even take a stealthy look at her when she appeared in front of her house.

Hind bint Utbah accepted Islam after the Liberation of Makkah (Fat-h Makkah), and she came to the Prophet (peace be upon him) among other women to pay the oath of allegiance to him. He said, among many other things, that a Muslim woman should never commit adultery. Hind reported, “Does a free woman commit adultery?!” She was astonished at the instruction as she could not imagine that a free woman could commit such a heinous crime or major sin! As that was against their nature and natural disposition.

During the days of his disbelief, before he embraces Islam, Abu Sufiyan ibn Harb did not lie to Hercules, the Roman Emperor, when the latter asked him about Prophet Muhammad (peace be upon him) so as not to be blamed for it among his people afterwards. Abu Sufiyan’s dignity and honor prevented him from doing that though he was still an enemy to the Prophet (peace be upon him) at that time.

Another example from the biography of Prophet Muhammad (peace be upon him) is when the Quraishites gathered a number of mighty fighters and went to the Prophet’s house on the night of Hijrah (migration) from Makkah to Madinah with the intention of assassinating him. After a long time of waiting in front of the house, one of them suggested that they should break into the house and climb the outer walls to kill the Prophet and put an end to his mission. However, Abu Jahl, a disbeliever, was prevented from doing that by his own Arab magnanimity, honor and dignity. He objected to the suggestion lest that would decrease his Arab manhood and/or knighthood. He further commented on that suggestion as saying, “No, by God, lest the Arabs would say that we have frightened the daughters of Muhammad!”

Given this, the most prominent thing for which Allah the Almighty chose the Arabs to be the bearers of His divine mission to all humanity was the noble morals and ethics they enjoyed while no one else has ever enjoyed such morals as they did at that time.