First of all, it must be noted that Islam guarantees the rights of women. Women in Islam are permitted to teach, preach and guide both women and men. They can give fatwas and teach Qur’an and Hadith in schools, colleges, universities and everywhere. Many Islamic organizations, Islamic centers and mosques also have very learned and knowledgeable sisters who participate in their mosques’ boards and involve themselves in administration, teaching, preaching and counseling.

However, leading prayer or giving Friday Khutbah is restricted to male Imams only when the congregation consists of men and women both, whether the prayer is performed in the mosques or outside mosques, and whether they are daily prayers or Friday and `Eid Prayer. Women are not allowed to lead such prayers.

However, they are allowed to lead a congregation consisting only of women. It is not only permitted for women to do so, rather it may even be considered highly recommended because of the greater rewards of praying in congregation as compared to praying individually. 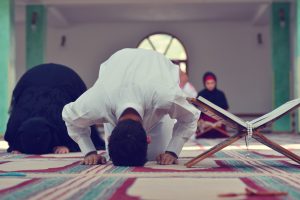 leading prayer or giving Friday Khutbah is restricted to male Imams only.

In our prayer we stand very close to each other or as we say “shoulder to shoulder and ankle to ankle” almost touching each other. We stand in straight lines. We make ruku` (bowing)and sujud. We are supposed to pray with sincerity and devotion concentrating our heart and mind towards the prayer. For this reason the Prophet (peace be upon him) told us that men and women should have separate lines. The lines of men should be in the front area, then the lines of children and then women. The Imam should stand in front of the congregation and should make ruku` and sajud before the congregation and they should follow the Imam.

The ideal way in this structure of prayer service is to separate men from women and not allow a woman to be ahead of all men and bow and prostrate in front of them. Haya’ is a special character of Islam. It is emphasized that men and women both must observe Haya’ (modesty) always and especially in their places of worship. Prophet’s wife `A’ishah and his Companion Ibn ‘Abbas are reported to have said that a woman leading other women in prayer should not stand in front of them like a male Imam, but in their midst.

Imam Ash-Shafa`i said, “If a woman leads men, women and boys in prayer, then the prayer of the women is valid and the prayer of the men and boys is invalid, because Allah has given men the role of protectors and maintainers of women, and He has not allowed them to be in charge, so it is not permissible for a woman to lead a man in prayer under any circumstances, ever.”

Al-Hafiz said: “It is as if women are not allowed to say remembrance of Allah because they are enjoined to keep their voices low in prayer at all times, because of the fear of fitnah. If women are forbidden to alert the imam by speaking if he makes a mistake, and should clap instead, so that they will not raise their voice in the presence of men, then how can it be allowed for a woman to lead them in prayer and deliver Friday khutbah to them?

Imam An-Nawawi said: “Our companions are agreed that it is not permissible for an adult man or a boy to pray behind a woman… the prohibition on a woman leading men in prayer applies equally to obligatory prayers, taraweeh and all supererogatory prayers. This is our view and the view of all the scholars from the earlier and later generations – may Allah have mercy on them.

Moreover if a woman leads a man or men in prayer, the men’s prayer is invalid, but her prayer and the prayer of any women who pray behind her is valid in all prayers, except if she leads them in Jumu`ah prayer, in which case there are two views, the most sound of which is that her prayer does not count. The second view is that it does count and it takes the place of Zhuhr. This is the view of Sheikh Abu Hamid, but it does not amount to anything. And Allah knows best.” (Al-Majmu`)

Can I Pray Jumuah at Home If There Is No Space at the Masjid?

What Is the Ruling of Reciting Adhkar after the Sunnah Prayers?

What Is the Ruling of the Sunnah Before Jumuah (Friday) Prayer?

Purification of Those Who Suffers from Hemorrhoids