Calling to God with Hikmah and Basirah

A very important verse delineating the proper steps of calling people to the path of Allah is the verse: 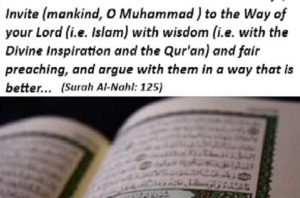 This is a command to the believers to make da`wah by using the beautiful and concise arguments.

In the Qur’anic commentaries based on reports transmitted from the Prophet (peace be upon him) and the early generations one finds a consistent interpretation of this verse.

Meaning of the Word Hikmah

The word hikmah in this verse has been explained by At-Tabari, based on narrations passed on, as, “(It is) the revelation of Allah that was inspired to you (Muhammad) and His book that is revealed to you.” Ibn Kathir repeats the same idea in his well-known Qur’anic commentary. Al-Baghawi only gives one meaning for hikmah, “The Qur’an.”

Ibn Abi Al-Zamanain gives only one meaning for hikmah and mawidhah hasanah combined, “The Qur’an.” Similar is to be found in other works of tafseer of this nature.

Hence, according to these scholars, the meaning of the word hikmah in this verse is not “wisdom” in a general sense, as is commonly understood and translated. But, in fact, it refers to the revelation received by the Prophet Muhammad (peace be on him). First, and foremost, one should make da`wah, therefore, by citing to the disbelievers and wrongdoers what Allah has mentioned in the Qur’an and what the Prophet himself stated.

Such arguments are the strongest and best arguments. They have the greatest effect on a heart that is willing to follow the truth. That is the apparent meaning of the word hikmah in this verse as these experts explained it. The Qur’an is filled with many proofs and arguments that demonstrate the truth of its call. Such arguments are the ones compatible and acceptable to human nature. The caller to Islam must study and understand these arguments.

Then he should use these arguments to call other people to Islam. This is part of the message of this verse.

Similarly, al-mawidhah al-hasanah means, according to At-Tabari, ibn Kathir and others, “the beautiful expressions that Allah has made a proof against them (the disbelievers and wrongdoers) in His book and has made mention of in His revelation.”

Hence, once again, this is a command to the believers that when they make da`wah, they should do so by using the beautiful and concise arguments and proofs found in the Quran. This is what will help them in being successful in making da`wah as is clear from the baa al-istiaanah at the beginning of the phrase.

An examination of those Qur’anic commentaries that are described as “tafseer based on opinion” (whether praiseworthy opinion or blameworthy opinion) reveals the following: Al-Matureedi mentions, quoting from Al-Hasan Al-Basri, the hikmah and mawidhah hasanah refer to the Qur’an. He also mentions a second view, without attributing it to anyone, that hikmah refers to the proofs and evidences that convince one to follow the path of Allah while mawidhah hasanah refers to reminding the people of Allah’s bounties upon them.

The Mutazilite Al-Zamakhshari has described hikmah as those clear, unequivocal evidences for the truth that remove any doubts or questions. Al-Mawidhah al-Hasanah, he says, are those arguments that make it clear that the caller has the called’s sincere interest at heart and is trying to benefit him. Then he says, “It is possible that it means the Qur’an. That is, call them by the Book which is hikmah and mawidhah hasanah.”

In another relevant verse, Allah says,

Say, ‘This is my way; I invite to Allah with insight, I and those who follow me. And exalted is Allah; and I am not of those who associate others with Him’. (Yusuf 12:108)

The point of this discussion is: Even when da`wah is being “revived and renewed,” what is being called to and what is used to call people to it do not substantially change. Even if one were to argue that newer issues are not directly dealt with in the revelation that the Prophet (peace be upon him) received, the correct stances on those issues can still be derived from the Qur’an and Sunnah.

Those Qur’anic and Sunnah arguments must form the basis of one’s da`wah if one hopes to be successful with the help of Allah. After those correct stances are derived, secondary evidences and proofs can be given to fortify or strengthen a discussion but only after the correct stance is derived. Although this point seems to be very obvious, it is a point that is sometimes neglected in the field of da`wah today.

The article is an excerpt from the Paper “Revisiting and Reviving the Dawah Narrative (Renewing the Da’wah Narrative in a Way that Safeguards the Fundamentals and Suits our Times and Places)” by Jamaal Al-Din M. Zarabozo.