How Can All People Be Expected to Believe in Allah?

How can all people be expected to believe in Allah given their varying- backgrounds, societies and cultures? 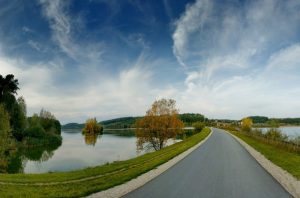 The Arabic word “Islam” means the submission or surrender of one’s will to the only true god worthy of worship “Allah”.

For people to be responsible for worshiping Allah they all have to have access to knowledge of Allah. The final revelation teaches that all mankind have the recognition of Allah imprinted on their souls, a part of their very nature with which they are created.

In surat  Al-A`raf, verses 172-173; Allah explained that when He created Adam, He caused all of Adam’s descendants to come into existence and took a pledge from them saying, Am I not your Lord? To which they all replied, “Yes, we testify to It”. Allah then explained why He had all of mankind bear witness that He is their creator and only true God worthy of worship. He said, “That was in case you (mankind) should say on the Day of Resurrection, ‘Verily we were unaware of all this.’”

That is to say, we had no idea that You Allah, were our God. No one told us that we were only supposed to worship You alone. Allah went on to explain that it was also in case you should say, “Certainly It was our ancestors who made partners (With Allah) and we are only their descendants; will You then destroy us for what those liars did?” (Al-A`raf 7:173)

Thus, every child is born with a natural belief in Allah and an inborn inclination to worship Him alone called in Arabic the “fitrah”.

Prophets were sent, as was earlier mentioned, to every nation and tribe to support man’s natural belief in Allah and man’s inborn inclination to worship Him as well as to reinforce the divine truth in the daily signs revealed by Allah.

Although, in most cases, much of the prophets’ teachings became distorted, portions remained which point out right and wrong. Consequently, every soul will be held to account for its belief in Allah and its acceptance of the religion of Islam; the total submission to the will of Allah.

We pray to Allah, the exalted, to keep us on the right path to which He has guided us, and to bestow on us a blessing from Him, He is indeed the Most Merciful.

Praise and gratitude be to Allah, the Lord of the worlds, and peace and blessings be on prophet Muhammad, his Family, his companions, and those who rightly follow them.

The Religion of Islam

The first thing that one should know and clearly understand about Islam is what the word “Islam” itself means. The religion of Islam is not named after a person as in the case of Christianity which was named after Jesus Christ, Buddhism after Gotama Buddha, Confucianism after Confucius, and Marxism after Karl Marx.

Nor was it named after a tribe like Judaism after the tribe of Judah and Hinduism after the Hindus. Islam is the true religion of “Allah” and as such, its name represents the central principle of Allah’s “God’s” religion; the total submission to the will of Allah “God”.

The Arabic word “Islam” means the submission or surrender of one’s will to the only true god worthy of worship “Allah” and anyone who does so is termed a “Muslim”. The word also implies “peace” which is the natural consequence of total submission to the will of Allah.

Hence, it was not a new religion brought by Prophet Muhammad (peace be upon him) in Arabia in the seventh century, but only the true religion of Allah re-expressed in its final form.

Islam is the religion which was given to Adam, the first man and the first prophet of Allah, and it was the religion of all the prophets sent by Allah to mankind. The name of God’s religion Islam was not decided upon by later generations of man. It was chosen by Allah Himself and clearly mentioned in His final revelation to man. In the Qur’an, Allah states:

This day have I perfected your religion for you, completed My favor upon you, and have chosen for you Islam as your religion. (Al-Ma’idah 5:3)

If anyone desires a religion other than Islam (submission to Allah (God) never will It be accepted of Him. (Aal `Imran 3:85)

Abraham was not a Jew nor Christian; but an upright Muslim. (Aal `Imran 3:67)

The article is excerpted from the book “The True Religion” by Dr. Bilal Philips.